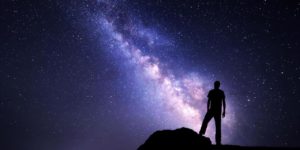 Many may regard the unseen realm with a skeptical eye, relegating it to the realm of superstition. While we westerners do have a scientific disposition and tend to think of things in terms of the natural world, many of us would not affirm the doctrines of materialism. In a very broad and brief sense, materialism is the position that the material world is all that exists. Yet there is a sense of how we all interact with the unseen realm every day. The unseen realm is not some abstract theological addictive. It is integral to our daily lives, and without it, we simply could not function as human beings.

It may be obvious at this point that when I am referring to the unseen realm, I am not merely referring to the world of angels and demons or gods and goddesses. Though they are part of it, I am thinking more broadly of anything that transcends material reality. Many of us may be inclined to suggest that we only believe in what we can see. But I think that this position cannot sustain its own weight, much less the weight of the full range of data. The unseen realm is intrinsically, inextricably interwoven throughout our lives.

We all know how to interact with a number. We know what it means to have $7. If somebody were to ask for $9 when you only had $7, you would know based on your knowledge of numbers and how they interact with one another that you could not fulfill the loan. But do you ever think about what a number is, really? The number 7 is not identical to the symbol 7. If the symbol were to change, it would still be identified by the quantity. If humanity were to embark on a campaign to systematically destroy every appearance of the symbol, 7, the number itself would still persist.

Interestingly enough, we can argue that even if human beings were to become extinct, the number 7 (along with all of its cohorts, such as 1, 2, 3, 4, 5, 6, 8, 9, etc.) would likewise still persist. If, for example, there were no human beings to think about the number 7, it would still be true that “there are (at least) 7 rocks.” There are at least 7 planets. There is at least 1 universe. This means that even if there is nobody around to think about numbers, numbers would still exist, hence disconfirming the idea that numbers are contingent upon human minds.

Something similar can be said of true propositions. A proposition is a true declarative that has semantic content. Think of the proposition that “The universe is not a zebra.” This will strike most of us as obviously true. Yet like our discussion of numbers, the proposition is not contingent on the symbols strung together in the sentence. It is also not contingent upon human minds. If it were, then if humans were to go extinct, it would no longer be true that “The universe is not a zebra.” Accuse me of personal incredulity if you would like, but that seems unbelievable.

Strictly speaking, we cannot see numbers or propositions. They are properly regarded as being members of the unseen realm. But that is not to say, as Plato thought, that they are abstract objects (which will in itself raise a host of objections). I am not here making an attempt to ground numbers or propositions in the unseen realm; I am only indicating that they properly belong there. So the idea that we should only believe in what we can see seems almost naive. One may say “But we see the effects of numbers, and therefore we have warrant for believing in them.” Ah, but you have conceded my entire case. If you cannot see numbers, but believe in them based on their effects, then you believe that they are members of the unseen realm, and that you literally could not function without the unseen realm.

Initially, I was going to include morality in the previous section, along with numbers and propositions. But it seems like moral values are in a bit of a different category, and their truthfulness is often contested in a different way than one would contest the authenticity of numbers or propositions. Let’s start by thinking of a moral proposition with which we would all affirm. “It would be wrong for a gang of men to beat a homosexual to death for being different.” This is a proposition that we would all affirm. But the question that we should ask is what makes that proposition really true as opposed to merely being culturally relevant and ingrained.

Materialists will often say that moral values are more relative, defined by individuals and cultures. But if that is the case, it seems like there is a bullet to bite. It would mean that our moral intuitions were not really an appeal to an ultimate standard of right and wrong. They would just be a product of human evolution: internalizing cultural taboos in the struggle for survival and cooperation. But then propositions such as “It would be wrong for a gang of men to beat a homosexual to death for being different,” would not really be true. It would be akin to saying, “It is wrong to drive on the left side of the road,” which is true in some cultures and false in others.

This is not my mere attempt to philosophize about what materialism entails. This is the position that many materialists take. On page 132 of River Out of Eden, the best-selling atheist author, Professor Richard Dawkins wrote (the oft-quoted), “The universe we observe has precisely the properties we should expect if there is, at bottom, no design, no purpose, no evil and no good, nothing but blind, pitiless indifference.” There are dozens more quotes from materialist philosophers that I could share. Basically, if we want to affirm that there our moral values have meaning, we will have to affirm that there is a standard beyond the physical world. We will have to affirm an unseen realm.

Attempts to ground moral values into the seen realm have largely been unsuccessful. If we want to affirm that “It would be wrong for a gang of men to beat a homosexual to death for being different,” we will have to say that it is always wrong, even if everybody in the world disagreed. That can be difficult if you want to ground values in the shifting sand of cultural perception. Some have attempted to ground moral values in the continuum of well-being of conscious creatures, which has had little success, falling victim to the law of identity. In summary, if you appeal to your moral intuitions and you believe that moral values are meaningful, then you interact with the unseen realm regularly.

Since this is a brief post, please know that I have treated this topic more thoroughly elsewhere, and responded to critics here and here.

As westerners and intellectual descendants of the Christian thinker René Descartes, we tend to hold the scientific pursuit in high esteem. Popularizers of science are seeing a lot of success, with shows such as Cosmos hosted by Neil deGrasse Tyson being highly favored. However, many of us do not always think about why science works in the first place. This is an unfortunate consequence of losing philosophical exploration in the pursuit of science.

Even the treasured pursuit of science presupposes that there is an unseen realm and that there is a mind behind the universe. Before creating a dichotomy between faith and science, or saying that you are too scientifically minded to believe in an unseen realm, think about the implications of that. Without an unseen realm, we would not expect that the universe could be engaged on a scientific level. If you have questions or objections about this argument, please click the link provided in the previous paragraph and see my full explanation.

Non-believers sometimes accuse religious people of using their faith as a crutch. They cannot bear reality and subscribe to these concepts to provide mental and emotional peace. There is a sense in which that is true. But that psychological explanation can be a double-edged sword. A psychologist may argue that atheism is a crutch to help them avoid worrying about the impending judgment. Some psychologists have even gone so far as to argue that bad fathers and absentee fathers can give rise to atheism. Similarly, different philosophical systems attempt to confront the problem of death in different ways. Many of us do use a crutch.

In that way, we also wrestle with life’s deepest questions. This point may be more presuppositional than the others, but I think it is worthy of making nonetheless. Many of us want to know the meaning behind reality. We want to know what will happen when we die. So we come up with ideas and coping mechanisms for the problem of death. The materialist might say something like, “There is nothing painful or frightening about non-existence. I did not exist before I was born, and it was not painful. It was just nothing.” This is a way of wrestling with deep questions of life and trespassing into the unseen realm.

It trespasses into the unseen realm because this is where the true solution to these problems can be found. In the death, resurrection and ascension of Christ, he was the firstfruit of those who will come back from the dead. All will rise again in the same way that Christ did, some to a resurrection of life and some to a resurrection of death. The question is not whether this is a crutch (Undoubtedly, it is a glorious picture of the future. But the fact that it is good does not mean that it is wish-fulfillment). After all, most of us use some sort of crutch to deal with the impending reality of our destruction. The question will be whether it is true. If it is true, then the unseen realm provides the answer to life’s most critical questions.

Typically, if you were to ask somebody why they believed in God, they would say something like, “Well, who do you think created everything?” This may be a pithy, almost simplistic way of rendering it, but there is a lot of depth to this argument. It has been the subject of many of the greatest philosophical minds of old. Gottfried Wilhelm Leibniz rendered what is called today the Leibnizian cosmological argument. It can be summarized succinctly in the question: Why does anything at all exist?

Most of us recognize the significance of this question. Everything has to have an explanation of its existence (even God). If something could just exist, as a brute fact, that would put a pause on the scientific pursuit, which is in itself a search for explanations. More fundamentally, though, is the idea that nothingness has no causal powers. To even speak of nothingness as a positive term is something of a joke. Nothingness has no properties. It is defined as the lack of anything. Nothingness could not produce a universe for the same reason that Nobody could not cover your shift at work.

This is the second and final time that I will speak presuppositionally here. But there is a sense in which we all recognize this. We all have access to the physical universe, and hence have instant and overwhelming evidence of the unseen realm. The very fact that there is a seen realm presupposes that there must be an unseen realm.

How We All Interact With The Unseen Realm Every Day

Recommended Reading:
Can A Universe Emerge From Absolutely Nothing?
If Science Works And The Universe Is Rational, Then God Probably Exists
If Atheism Is True It Follows That Atheism Is False