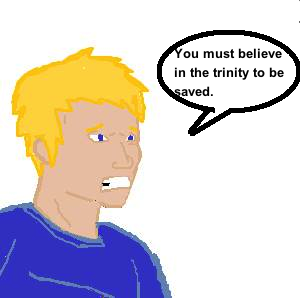 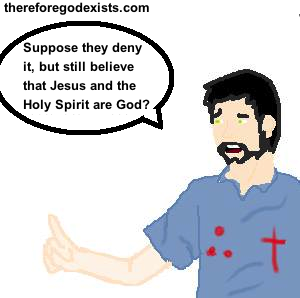 who believe that Jesus is God and who believe that the Holy Spirit is a real person. They are known as modalists. So I suppose that when I ask the question, ‘Are Oneness Pentecostals Saved?’ I am asking if modalism is a condemnable heresy, because that is really the biggest dividing line.

What is modalism? Modalism is the view that the Father, the Son, and the Holy Spirit are the same person, in the same way that a man can be a father, a son, and an employee. This raises a few confusing questions about the distinctions that Jesus raises between himself and his Father, such as in Luke 23:46, wherein he says, “Father, into your hands, I commit my spirit.” I expounded upon this point in my article Is Jesus God The Son? So modalism is certainly false doctrine. But is it condemnable doctrine?

As with most things, it depends.

However, the average laymen in the pews do honor the Son, because they are just not taught Oneness Pentecostal doctrine. The typical oneness view that is held is known as patripassianism. This is the view that in the incarnation, God the Father was removed from Heaven. There was no God in Heaven. God was solely on earth. Thus, God the Father died on the cross. Most Oneness Pentecostals hold this view, and this is the view that Tertullian struck to pieces into his Against Praxeas. (Of course, David K. Bernard criticized Tertullian for attacking patripassianism when it is the less sophisticated of the views. But if most modalists are representing patripassianism, how can we blame him for making that mistake? Further, Oneness Theology may not have been fully developed by that point, so perhaps patripassianism was the only available option.)

So if you want to condemn Oneness Pentecostals, you would have to ask what their view of the Son was. Do they have a descending Christology? Do they honor the Son? Is the Son God? If not, then they would have to fall into John 5:22-23.

What Is Their Authority: Tradition or Scripture? Many Christians, not just Oneness Pentecostals, hold their tradition in higher authority than the Bible. Their interpretation of Scripture becomes Scripture. They learn what the Bible says before they even read the Bible, and so they come to the Bible with all of these presuppositions. So when a Oneness Pentecostal reads Jesus saying, “Father, into your hands, I commit my Spirit,” (Luke 23:46), they have to struggle to find some way to twist and wrinkle that piece of the puzzle into their paradigm, even if it does not fit.

So the question is, how confusing of a man have they made Jesus into? When Jesus is praying to his Father, do they have a man praying to his own spirit? When Jesus says that he shared glory with the Father before the world began (John 17:5), are they saying that Jesus was a forethought in the mind of God before the world began? How about when Jesus says that he brings forth two witnesses, namely himself, and the Father (John 8:18). Is that sort of like saying, “I have three witnesses: me, myself, and I.”? What manner of man have they made Jesus into? Does Jesus mean what he says? Is Jesus bad at communicating? I would have to wonder these things as I am engaging with a Oneness Pentecostal. If they really do think these things, that would raise a few chilling questions about whether God is really guiding them.

So when we teach them the biblical truth that this is a distinction of persons, how do they react? Are they resolutely opposed to it? If that is so, it would be a valid question to ask if they were truly saved.

It is a tricky subject. And of course, I am not the judge. I am only asking what the Bible says. The Bible teaches that if you do not believe that the Son is God, then you do not honor the Father (John 5:22-23). Further, if somebody holds their tradition in higher authority than they do the Scripture, if they twist the words of Christ, and if they are resolutely non-trinitarian, then they are resolutely against the biblical stance, and we have good grounds to question their salvation. I am not the judge. The Bible is the judge, and I am just asking what it says about this difficult subject.

That’s three times in this article that I have said, ‘I am not the judge.’ So I’ve saved you the trouble. But you will probably remind me in the comment section anyway! :)