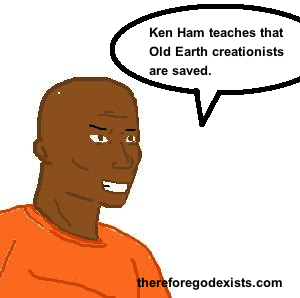 I think it ought to be credited to Ken Ham and Answers In Genesis for their repeated claims that one need not believe in young earth creationism to be saved. That is to say that Ham believes and has taught on multiple occasions that one can believe in an old earth and still be saved. During a sermon, he said of an apologist for old earth creation, “He is a great man of God. He’s in Heaven.” So I would like to quickly disabuse you of the assumption that Ham and Answers in Genesis condemn all old earth creationists. 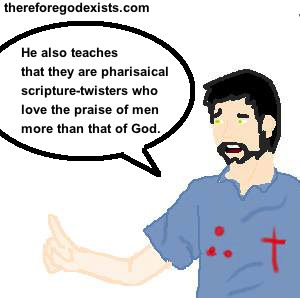 I further think that they have a lot of great and scholarly material, and can raise serious challenges to both the biblical and scientific arguments. With that in mind, I also think that he has been quite discourteous in the past and continues to be today with those who disagree with him, even his brothers in Christ. That is why I say: It’s an attack on the (adopted) son: Ken Ham maligns brethren.

It’s An Attack On The Son In a 2002 article entitled It’s An Attack On The Son, Ken Ham indicted William Lane Craig for his claim that he was going to go with the flow of contemporary cosmology. Critical of Craig, Ham writes, “It’s ideas from outside the Bible, not the plain reading of Scripture, which determine his view on the age of the earth.” But that is not what Craig said. What Craig was saying was that he believes that Genesis permits him to follow the flow of contemporary cosmology. As he said in his debate with the atheist Frank Zindler, “Genesis is open to all manners of different interpretations, and Christians are not necessarily committed to special creationism.” In another debate, he said that he takes a position of “progressive creationism.” But in his debates with atheists, he tends to leave the issue of interpreting Genesis aside, because that is an in-house debate to be had amongst Christians. So he does not want to be caught up debating interpretations, so he just points out that he believes that Genesis can be interpreted in alternative ways.

The problem with what Ken Ham is doing is that he just assumed that his interpretation was right, and then attacked Doctor Craig for taking a different one, and charged him with attacking the Son. Craig could equally indict Ham for attacking the Son for his stance of young earth creationism. In fact, anybody, with any interpretation, could accuse another person of attacking the Son, if they disagree. It seems to me that this is just below the belt. That is why: it’s an attack on the (adopted) son. Since Craig is a Christian, a brother in Christ, he is an adopted Son, and I think that what Ken Ham had to say was uncharacteristic of how Christians should treat each other. He misrepresented him, acting as though he was just ignoring the Scripture, when in fact his foundation for following contemporary cosmology was precisely that Scripture allowed it. I think that Ken Ham owes Doctor Craig, who seems to be one of the finest and most loving Christian gentleman out there, an apology.

Hugh Ross Twists The Bible. Like William Lane Craig, Doctor Hugh Ross is a progressive creationist who believes in the day-age reading of Genesis chapter one. He has proven a very challenging opponent to any young earth creationist, both in expositing Scripture and, as an astrophysicist, he can explain why astronomy is a significant challenge to those who want to maintain a young universe. Unlike Doctor Craig, he is a perpetual apologist for the old earth view, constantly emerging in the debate circle, and responding to what Ken Ham has to say. As people often do, and few are immune to, Ken Ham seems to become frustrated with Doctor Ross after the ongoing intellectual struggle.

In his 2014 article, Hugh Ross Twists The Bible To Fit Man’s Fallible Opinion, Ham did not really add anything new or substantial to the dialogue. It just seems to be a nasty little response to an interview that Ross has. It seems as though no matter which way Ross turns, Ken Ham is there to point the finger and to lodge accusations at him. Learning that the interviewer was impressed by Ross’s academic credentials, Ham wrote that Ross “loves the praise of men more than the praise of God.” I would just like to pose the question of how Ken Ham knows what Doctor Ross loves. It seems to me that any old earth creationist could be equally indicted by what Ken Ham has to say. So while out of one side of his mouth, he may say that they are saved, out of the other side of his mouth, he argues that they are scripture-twisters, compares them to Pharisees, damages the salvation message and discourages faith.

While I certainly respect the intellectual discourse, and promote his rebuttals of Ross’s work, I think that this article is just an act of frustration. It’s an attack on the (adopted) son, and Ken Ham owes Hugh Ross an apology.

What Do I Suggest? Some might have the impression that I am a progressive creationist as they read this, because I have defended Doctor Craig and Doctor Ross. But this article is not about the debate between young and old earth creation. It is about how we are going to treat our fellow brothers in Christ when we disagree. Are we able to have civil discourse, or must we misrepresent them without doing proper research, as Ham did with Doctor Craig? Must we follow them around and just look for reasons to attack and insult them, as Ham did with Doctor Ross?

There are many scholarly posts on Answers In Genesis, and on most days, I would affirm their intellectual honesty and passion for pursuing truth and defending God’s word. But other pages read more like an opinion blog. Other pages read more like they are just being hateful. It’s an attack on the (adopted) son. Ken Ham needs to step back and ask what it is that he hopes to accomplish through his ministry. Does he want to malign brethren? Does he want to send the message that if you disagree with him, he is going to write nasty retorts of what you have to say, that do not advance the discussion one iota?

I think this is something that anybody could point out. If Doctor Hugh Ross behaved in the same way, I would point it out and write a similar article. Ken Ham and I agree about most things, and he has a lot of great material. But he does not handle disagreements with brethren in a mature manner.