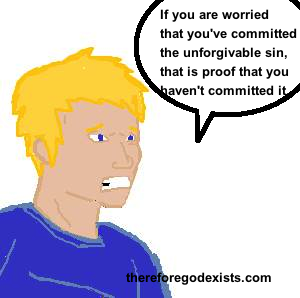 What is the unforgivable sin? When Jesus encountered the Pharisees, they accused him of being filled with demons, to which he replied that anyone may blaspheme the Son of Man, and it is possible for them to be forgiven. However, if they blaspheme the Holy Spirit, that person may never be forgiven (Matthew 12:31-32). This is a topic that burdens Christians, and that they struggle with, because it raises certain philosophical questions. Why does there need to be an unforgivable sin? Why is it blasphemy to an unforgivable extent to say that the Holy Spirit is a demon? 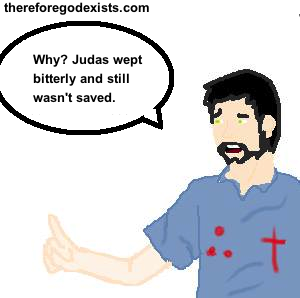 Further, Christians end up offering contradictory resolutions to this quagmire. They will say that if you are worried that you have committed it, this is proof that you have not committed it. But this raises an odd question. Suppose somebody had, during their lifetime, referred to the Holy Spirit as a demon. Would they never feel guilty? Would they never worry that they had committed it? Why? Judas wept bitterly after he betrayed Christ (Matthew 26:75). Unsaved people can regret their sin and they can even desire repentance. So again, the question presses upon us: how does one know that they have committed the unforgivable sin, and what is the unforgivable sin?

This is unforgivable because it disconnects a person from the atonement of Christ. There is only one way for a person to be forgiven of their sins: by putting their trust in the Lord Jesus alone for their salvation (Ephesians 2:8-9, John 14:6, 3:16-18). When they do that, they are made righteous in the sight of God and adopted into his family. However, if a person does not do that, they remain under God’s wrath and are never forgiven. Thus, the unforgivable sin is to deny the power of God. It is to refuse to be born again during your life. It is to refuse to put all of your trust in God. What is the unforgivable sin? It is to refuse salvation until your very last breath. Such a person will never be forgiven.

How do I know if I have committed the unforgivable sin? Are you terrified that you have committed it? You still may be in the process of committing it. Thankfully, unlike what most evangelicals will tell you, the unforgivable sin is not a past event, it is something happening throughout your entire life. You know that you are presently committing the unforgivable sin if you are not saved. Have you been born again (John 3:3-5)? Have you put your trust in Christ for your salvation (Ephesians 2:8-9)? Has God worked in your life, striving to bring you on the righteous path, away from sin, and into sanctification, and into holiness (Hebrews 12:8-10)? Are you becoming more and more like Christ and less like yourself (Second Corinthians 5:17, Galatians 4:14)? If your answer to these questions are no, then you are in the process of committing the unforgivable sin. You are not saved.

So my urgency to you would be that you need to put your trust in Christ for your salvation. If you were jumping out of helicopter, you would put on a parachute and you would trust in that parachute to save you. In exactly the same way, put your trust in Christ for your salvation, you will be born again, made a new creature by the Holy Spirit and given the free gift of eternal life. Therefore you will halt your process of committing the unforgivable sin. Do that today. If you have done that, then you have not committed the unforgivable sin in its’ fullness.