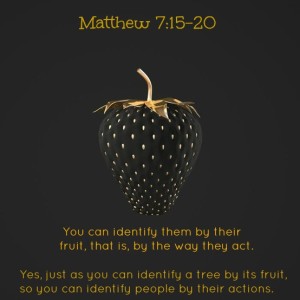 I often encounter people who are unaware that they are in a Christian cult, even though the signs of brainwashing are there and they just have no idea that their approach to Scripture is absolutely consistent with every other Christian cult group that is out there. Now if your group happen to fit many of these criteria, be aware that this list was not made specifically for your group. Your group just happens to fit the most usual description of a cult group. I think, based on experience, I can point out at least a few signs that you might be in a Christian cult.

1 – You condemn the body of Christ. If you find yourself saying that the majority of Christians are wrong, and your congregation (or denomination) alone has the truth, your behavior is strikingly similar to that of every other cult group, comparable to the Westboro Baptist Church. A sign of cultic behavior is that those who are not in your congregation (or denomination) are not true Christians. With that in mind, by condemning the rest of the body of Christ, you condemn the very gospel by which we are saved, that is, the gospel of grace through faith (Ephesians 2:8-9).

2 – You rigorously oppose the view that Jesus is God. Cult groups typically reject the idea that Jesus is God, and with it, also reject the very nature of God himself, that is, God is a trinity. The triune nature of God has always served as a measuring stick of false Christian groups. If a group does not believe in the trinity, it is usually because they are a cult group. To illustrate this point, consider that the following groups reject the trinity: Jehovah’s Witnesses, Mormonism, Christian Science, Christadelphians, Unification Church, Unitarian Universalist Christians. What do these groups have in common? They are commonly known to be cult groups.

3 – You learned your beliefs before you read the Scripture. When talking to a cult member about Scripture, we ask them what they think of a particular point, and do you know how they reply? They do not. They usually make up a bizarre interpretation on the spot, have a bizarre interpretation memorized, or they quickly change the subject. But they do not have proper hermeneutics. They usually come to know their beliefs before they ever read the Bible. Somebody tells them their beliefs, then, when they open the Bible for the first time, they already have doctrines pre-loaded into their mind, and they try to force them into the Bible.

4 – You have a human vicar of God. When I say a vicar, I mean somebody who stands in the place of God, or claims to be the incarnation of Jesus Christ himself. Cult groups typically have a human leader, who they dutifully obey at all costs and to all ends. This person determines what the Scripture says, or what God has revealed. Most usually, they will claim that they alone know what the Scripture means.

5 – You have a special revelation from God. Now of course God interacts with everybody who has been born again. But I am talking about those who claim that God has rendered a new revelation. He whispered something in your ear, such as, “you are the Messiah,” or he gave you a new set of holy texts, apart from the Bible, which need to be obeyed.

6 – You believe in works salvation. The Bible teaches that being a good person cannot merit eternal life. This is because we have already sinned. Since God is good and just, he must punish us for our sins. In and of ourselves, we have no place with him. But praise be to God, he sent his Son, Jesus Christ, who lived a perfect and sinless life. When he was murdered, all of the punishment, all of God’s wrath went out upon him. Three days later he rose again from the dead. Now, we can take the righteousness of Christ upon ourselves, throwing ourselves on his mercy and being born again. But it is a free gift of God (Ephesians 2:8-9). It cannot be earned by doing good deeds. Cult groups will deny this.

7 – You do not need the Bible. Throughout the generations, God revealed himself to the prophets of old. They relayed his word to the people of Israel, and the apostles relayed it to the Gentiles. Now those who read are blessed and know how to have eternal life with God by throwing ourselves on his mercy through the sacrifice of Christ and being born again. We are balanced by the Scripture so that we do not wander too far into emotionalism and non-sense. But cult groups often do not emphasize the need for the Scripture or just outright tell you to not read it. This is the inerrant, inspired, and authoritative word of God, and you do not read it. Your cult group does not want you to read it.

8 – There is a lot of sin in your congregation. Of course this one may be more difficult to detect because sometimes sin can be kept hidden. But for example, we often see in the charismatic movement that people who claim to be pastors are getting wrapped up in weird sex scandals or other sin become prevalent in their congregation. Jesus said this: “Beware of false prophets who come disguised as harmless sheep but are really vicious wolves. You can identify them by their fruit, that is, by the way they act.” (Matthew 7:15-16).

9 – You do not know the Scriptures or the power of God (Matthew 22:19).
You do not care to read the word of God even though Jesus zealously read it and ate it as though it were his very sustenance. Further, Jesus told us to eat him as though he were our sustenance (Luke 22:19). It is in him that we are supposed live and move and have our being (Acts 17:28). But you do not do that. You live in sin and you do not care to overcome it. The Father does not discipline you when you sin (Hebrew 12:8-9). You are not being sanctified because you have not been born again because you do not know God. You are in a cult.

10 – You became angry and offended as you read this list. I say again, this list was not formed around your particular congregation. But if the shoe fits, take off that show and throw yourself on the mercy of God through the atonement of his Son. “For God so loved the world that he gave his only Son that those who believe in him shall not perish but have everlasting life.” (John 3:16)