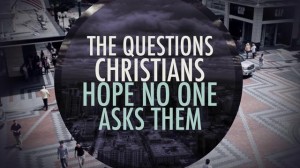 1 – If God created everything, who created God? If God created everything, that is, the entire universe, that means that he created time. If he created time, then he must be timeless, or eternal and uncaused. Secondly, this question misunderstands philosophy of science. In order to say that A caused B, you do not have to be able to show where A came from. If you did, that would leave to infinite regress – you’d have to show where A came from, where the cause of A, the cause of the cause of A, and so on, to infinity. You’d never be able to explain anything if this principle were true.

3 – Why believe in Heaven or Hell? The most terrifying truth in all of Scripture is that God is good. This is terrifying because we are not good. If a good judge has a guilty criminal before him, he must give him justice. If he just pardoned his crimes, he would be a corrupt and immoral judge. God is not a corrupt and immoral judge. Since we stand before him guilty, he therefore must punish us. He must give us his wrath. Hell is a manifestation of God’s goodness.

4 – Why are there so many denominations? Many of these denominations separate based on secondary distinctions. But still, these are distinctions between brethren. These denominations do not condemn each other, but instead acknowledge that we all have the core foundational truth, that is, the Son of God, who lived a perfect and sinless life was murdered and took on the punishment for sin that we deserve and rose from the dead three days later. We are guilty criminals, and Christ stepped in and paid our fine. Now we need to throw ourselves on the mercy of God and his atonement through Christ and repent of our sin. Anyone who does that is conformed to the image of the Son, standing before God without sin and is truly saved. This is independent of denominational affiliation.

5 – Why do you believe in Jesus? We do not believe in Jesus just out of blind faith. In fact Christians through history have never believed in Christ out of blind faith. We believe in Christ because we personally know him. We have been born again by the regenerating work of the Holy Spirit and encounter God as though he were another person in our lives. Now people may reply to this that religious people hallucinate all of the time. But unless you have some reason to think that your experiences are hallucinations, then you should believe them. Just because hallucinations exist, does not mean that we should constantly be on the lookout for them. People hallucinate other people all of the time too, that does not mean that we should be suspicious that we are hallucinating our spouse. So the same with our relationship with God.

6 – How could God allow suffering? There is suffering in this world. That is because God created a world that was meant to be inhabited by sinful creatures. Everything that we touch and encounter will remind us that we are fallen creatures. So people do suffer. God allows them to suffer because his ultimate purpose for us is that we come into an eternal and loving relationship with him forever. Our suffering in this life is of secondary concern as opposed to our eternal life.

7 – Why do you condemn homosexuals? What you should notice about this is how they will often personalize the question. It’s not a concept – homosexuality. It is a person – the homosexual. Everybody has proclivities. I may have the proclivity to be angry, but that does not justify gay-bashing. Just because you feel a certain way does not mean it is right. But we do not condemn homosexuals. A homosexual may freely repent of their sin and believe in the Lord Jesus Christ. This sin is just the same as every other sin that men commit. In and of ourselves, we are equally as guilty as the homosexual because we have offended God by violating his law.

9 – How can I trust Christianity when Christians are such hypocrites? Christians are hypocrites. As Doctor Frank Turek said, “I am hypocrite. When people tell me that they cannot go to church because of all of the hypocrites, I always say, ‘come on down, pal. We have room for one more.’ The church is a hospital for sinners, not a country club for saints. I will never be perfect. That is why Christ had to come.” Also you would never say that because some liberals are jerks, that therefore you could never be a liberal. The truth in Christ has absolutely nothing to do with my behavior. This is what is known as an ad hominem argument. This means that you attempt to refute a view by attacking the person who holds it. This is a logical fallacy.