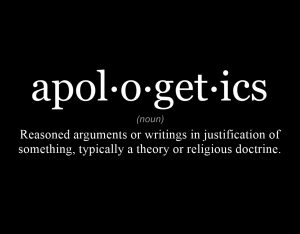 Apologists argue that in a secular world, their method is essential; they need to help people overcome intellectual obstacles so that the gospel can be heard fairly. People are laying awake at night wondering, “Does evolution really undermine my faith?” or “Is there evidence for God?” As I pointed out in a previous post, I think this image is largely an exaggeration. While apologetics is thought to be a necessary preliminary task prior to preaching the gospel, if the apostle Paul were writing 1 Corinthians today, he might say, “Where is the wise person? Where is the teacher of the law? Where is the apologist of this age?”

Though, apologists do appeal to several passages for biblical warrant. The issue is that many of these passages are perfectly compatible with fideism. Fideism is the doctrine that knowledge of God depends on faith. Notice that this does not exclude a defense of the faith or answering difficult questions that are based on revelation. There are several examples of this scattered throughout Scripture. Just as apologetics will appeal to them for biblical warrant for their practice, the fideist could likewise appeal to them. Peter could even say something such as, “In your hearts regard Christ the Lord as holy, ready at any time to give a defense to anyone who asks you for a reason for the hope that is in you,” and even if one grants the apologists’ interpretation, it would still be compatible with fideism.

For a true illustration of apologetics in Scripture, a character in the Bible would have to venture outside of Scripture or direct, personal revelation with God to provide evidence for God. Fulfilled prophecies, argumentation and rational discussions will not be sufficient to rebut fideism. The tall order for the apologist is to find something like the Kalam Cosmological Argument, or an endorsement of that approach, in Scripture.

When confronted with different cultural sensitivities, the apostle Paul would sometimes adjust his approach. He wrote in 1 Corinthians 9:20, “To the Jews I became as a Jew, in order to win Jews. To those under the law I became as one under the law (though not being myself under the law) that I might win those under the law.” He went on to say that he becomes all things to all people so that by all means he might save some. The apologist might say that he is exercising a similar approach: in a westernized culture that demands scientific evidence, he adapts his presentation of the gospel, westernizing it so that it contains that evidence and is more appealing to the culture.

Of course, as Doug Groothius pointed out in Christian Apologetics: A Comprehensive Case For Biblical Faith, the practice of apologetics did not begin in the modern, western world. Apologists such as Groothius argue that the call for apologetics can be found within the biblical text itself. In 1 Peter 3:15, he issues a clear command: “but in your hearts regard Christ the Lord as holy, ready at any time to give a defense to anyone who asks you for a reason for the hope that is in you.” Groothius pointed out that the word for defense in this passage is apologia, from which apologetics derived (You may view my linked article in the first paragraph of this post for a rebuttal of this interpretation).

But even if we grant that the cause is noble, that it is to share the gospel with a culture that needs scientific analysis, that does not mean that it receives biblical warrant. In 1 Corinthians 9, Paul was referring to the freedom he has in Christ to eat and drink outside of the customs of orthodox Judaism. But when he is with the Jews, he will keep those restrictions out of respect so as to not be offensive or make them uncomfortable. He was not even altering his presentation of the gospel. He was merely saying that he would not eat or drink restricted items when in the presence of the Jews. For the apologist to say that Paul’s principle allows us to adapt our presentation of the gospel to include the Kalam Cosmological Argument stretches the principle too far.

Throughout the New Testament, the religious leaders accosted Jesus and attempted to ensnare him in theological puzzles, either to expose him as a failed teacher or turn the crowd against him. One of the most popular examples is when Jesus was asked whether the Jews should pay taxes to the Romans. If he says yes, he will lose the support of the masses. If he says no, he will be under closer scrutiny and persecution of the Roman overlords. Instead, he said, as we all know, “Give to Caesar what is Caesars, and to God what is Gods.”

Groothius cites another example: when Jesus debates the Sadducees in Matthew 22. Groothius is essentially arguing that instead of retreating to empty assertions and threats of damnation, Jesus offered a rational defense of what he believed. This provides, argues Groothius, biblical warrant for the practice of Christian apologetics.

Notice though that the basis for Jesus’s rationale in Matthew 22 is two-fold. He tells the Sadducees in verse 29, “You are wrong, because you know neither the Scriptures nor the power of God.” He was still appealing to his faith in the Scriptures. This practice is perfectly compatible with fideism! An apologist might be so bold as to call it “defensive apologetics,” but if you are not traversing the boundaries of the Scripture, you could just as well call it defensive fideism.

After Jesus’s death, the apostle Paul was commissioned to preach to the Gentiles. This introduced a host of different challenges, as their religion was not only foreign but also abhorrent to a devout Jew such as Paul. Yet the fact that thousands of years later, billions of Gentiles have lived and died is a testimony to his success. Groothius rightly pointed out that Paul is our model for reaching out to the world.

In Acts 17, Paul surveyed the religious artifacts as he debated the Grecian philosophers. Recognizing that they were very religious people, he made an appeal to them based on the common ground that they shared. One of the idols had the engraving, “To an unknown God” and said in verse 23, “Therefore what you worship in ignorance, this I proclaim to you” and launched a presentation of the biblical narrative. Thus, according to Groothius, Paul found common ground between his message and the Pagan worldview.

There is an element of truth in this presentation, but it underestimates Paul a bit too much. In this passage, and in many of his letters, Paul demonstrates that he is highly versed in Grecian religion and scholarship. He applied a socratic methodology of shaming philosophers: he forced them to admit their ignorance [Marguerat, Daniel. Paul in Acts and Paul in His Letters, page 72]. Marguerat also points out that Paul may not have been praising philosophers for being very religious, but instead saying that they were “too superstitious” [pages 73-74].

Marguerat continues, “He puts his cards on the table in v. 30– 31 by affirming that the time for ignorance is now succeeded by the time for revelation and conversion in expectation of Judgment.” Interestingly, Paul’s common ground with the philosophers was in his language: the use of philosophical jargon, and the contrast between a the time of ignorance and the time of knowledge.

The natural man will not accept apologetics

The apostle Paul wrote that the gospel is the power of God (Romans 1:16). Paul characterized the gospel in different ways throughout his letters, but when citing a creed in 1 Corinthians 15:3-8, he said that his gospel was that Christ died, was buried and rose again on the third day. That resurrection proved that what he said about himself was true and that those who put their trust in him will have everlasting life. That message is the power of God.

Apologists argue, though, that unbelievers do not receive this message because they have sincere intellectual doubts that prevent them from accepting that Christianity is true. They need words of wisdom and persuasive speech before they can accept the gospel. It seems difficult to reconcile this notion with Paul’s view of the effect of sin. For Paul, sin has a strong survival mechanism. It prevents the sinner from accepting conclusions that will eradicate it. He writes in 1 Corinthians 2:14:

“A natural man does not accept the things of the Spirit of God, for they are foolishness to him; and he cannot understand them, because they are spiritually appraised.”

Of this passage, Thomas Schreiner writes in his commentary, “It is not that unbelievers cannot mentally grasp or comprehend the message of the gospel. Paul’s point is that they do not welcome or receive the message because it strikes them as manifestly untrue.”

If Paul believes that the message of the gospel will strike the natural man as manifestly untrue, then the practice of apologetics is useless, for the natural man will always reject the arguments until the Holy Spirit makes him a spiritual man. Apologetics can be somewhat useful in prompting the natural man to think about spiritual things, but there is definitively no sequence that has the natural man being presented evidence for Christianity, reasoning, and coming to faith. That does not and cannot happen, according to Paul.

The apologist will then ask the obvious question: what can be done? Well, discuss the gospel and sin and the need for a Savior. Help the natural man find a strong community of Christians. If you want to give them books about apologetics, then you can, it might help them to remain focused on spiritual things. But books about the trinity or justification by faith would be far more useful.

Where is the apologist of this age?

Apologetics can be useful for Christians in helping them to overcome doubts and reaffirming their faith. But in evangelism, the apostle Paul does not think that removing intellectual barriers is particularly useful. Personally, in my experience, apologetics helped me come to faith but only in the sense that it helped me think about spiritual things. There is no biblical warrant for apologetics and there are biblical motifs that make apologetics dysfunctional.

Where is the apologist of this age?