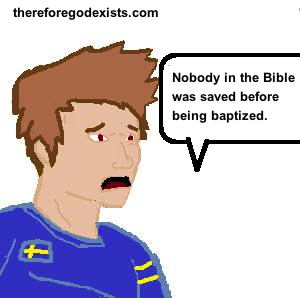 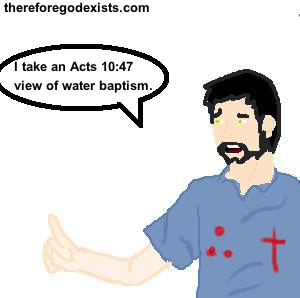 Now I should also point out that this essay will ignore some of the positive arguments and I will make a case of my own. It will ignore Acts 2:38. However, you may read my exposition of Acts 2:38 by clicking here. (But delay that until after you read this article!)

Paul puts this argument like this. “But if the Spirit of Him who raised Jesus from the dead dwells in you, He who raised Christ Jesus from the dead will also give life to your mortal bodies through His Spirit who dwells in you.” (Romans 8:11). He goes on to say that the Holy Spirit is the “spirit of adoption,” through whom we can call God our Father (v. 15). He concludes his argument by saying that the Spirit testifies that we are children of God (v. 16). Thus, by being filled with the Holy Spirit, a person has absolute assurance, the highest of authority, that they are saved. If salvation is anything other than being adopted into the family of God and calling God your Father, then I would like to know what your conception of salvation is. Thus, those in Acts 10:47 were saved before being baptized.

Now we have to be careful in how we frame this argument. People who believe in baptismal regeneration often reply that this is just an argument from silence. For example, Jesus said in Mark 1:15, “Repent, and believe in the gospel.” That he did not mention the Holy Spirit does not lead one to believe that we do not need the Holy Spirit. Similarly, just because Acts 10:47 does not mention baptism, does not mean that we do not need baptism. This is the objection. The problem is that Acts 10:47 does mention baptism. People are saved, and it says that afterwards, they are water baptized.

God’s Covenant With Men. Guilty sinners have come into a relationship with God since the very beginning, and God cast their sins out, as far as the east is from the west (Psalms 102:5). He was able to do that because even before the death of Christ, the sins’ of men were still atoned for by his death in a retroactive fashion. But actions such as circumcision and burnt offerings, grain offerings, peace offerings, sin offerings, guilt offerings and so forth were a response to grace. They were a consequence of salvation, not a cause of salvation. This is Paul’s argument in Romans 4, when he says very plainly, “Under what circumstances was [righteousness] credited? Was it after he was circumcised, or before? It was not after, but before! And he received circumcision as a sign, a seal of the righteousness that he had by faith while he was still uncircumcised.”

How Is One Baptized Into The Body of Christ? When we read passages such as “Baptism saves,” (First Peter 3:21), or that we were buried in baptism (Colossians 2:12, Romans 6:3-5), to which baptism is he referring? Paul expounds upon this for us in First Corinthians 12:13, where he says, “We were all baptized by one spirit, into one body… we were all made to drink of one Spirit.” Thus the baptism that initiates a person in the body of Christ is the baptism of the Holy Spirit.

Since water baptism and the baptism of the Holy Spirit always come at different times in the New Testament, we are left with the conclusion that the baptism in water does not bring a person into the body of Christ. It symbolizes that they were brought into the body of Christ. That is why they are baptized in water. Water is a symbol of the regeneration of the Holy Spirit (John 4:14). The water is an outward symbol of the inward regeneration. That is why when Peter says that baptism saves, he expounds upon this by saying that it is not the removal of dirt from the flesh, but the appeal to God for a good conscience. They are made new. They are baptized by the Holy Spirit, and water symbolizes that. That is the Pauline view of joining the body of Christ.

Is Baptism Necessary For Salvation? It seems to me that if there is even one instance in which somebody is saved without first being baptized, the answer must be no. The New Testament paints a picture of our model of worship and sacraments. If a group of people are saved before baptism, it follows logically and necessarily that water baptism is not necessary for salvation. But that is what we have in Acts 10:47. That is the nature of God’s covenants with men, and further evidenced by how one enters into the body of Christ. That is why I take an Acts 10:47 view of water baptism.