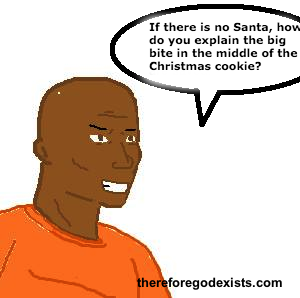 The Christmas tradition that we see today did not just pop into being in its’ fullest form. People did not wake up one day and place a pine tree in their living room and convoke the big man in a red suit. It is similar to many other social customs and holidays. It evolved over a long period of times with minor variations and mutations, eventually becoming what we know as Christmas. However the Christmas tradition would seem bland and lame without the towering and beloved figure known as Santa Claus. After all, you may argue, ‘How do you explain the presents under my tree? How do you explain the jingling bells that I heard on the darkest hour of Christmas eve? And where did my letter to Santa go? Why was it not returned to sender? And who ate the Christmas cookies?’ Alas, while it may rob you of your Christmas splendor, while all joy may fade, and you will be left drowning in despair, I would like to suggest 5 reasons Santa probably does not exist. 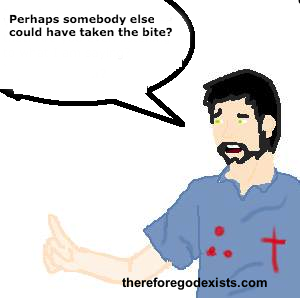 The absence of evidence is evidence of absence. When we consider the existence of God, atheists often tell us that the fact that there is no evidence for God suggests that he does not exist. The two fundamental errors that they have made is that there is evidence for God and that they are assuming that the absence of evidence is evidence of absence. God could exist and provide no evidence if he so chose (as I pointed out in my article 5 Reasons We Shouldn’t Believe Atheists Unless They Can Disprove God’s Existence). However, in contrast, the Santa narrative would produce conditions in which there was tangible evidence that literally everybody in the world could observe.

If Santa Claus existed, he would necessarily appear in the living room of every single home that has children in the middle of the night. One need only plant a video camera in their living room to capture him (after all, as canon reminds us, Santa is a big man and would be easily spotted) or simply stay awake, patiently awaiting his arrive. Now, one might reply that you dozed off to sleep for a moment without realizing it and in those moments, Santa arrived. But unless there are presents that were not there prior to your dozing off, that hypothesis would be unwarranted and simply ad hoc. You would be constructing a narrative to circumvent the evidence rather than basing your hypothesis on the evidence. This is one of 5 reasons Santa probably does not exist. His existence would insist upon evidence, and there is none.

The Funding Problem I know that it may be difficult to think critically about some of the beliefs that you hold sacred (many atheists struggle with this as well as I pointed out in my article 5 Reasons Atheism Is A Crutch) but just think for a moment about what we are being told to believe. We are being told that a man employs literally thousands of emissaries who venture throughout the world prior to Christmas to discover what literally every child in the world wants. When they return with these lists of demands, Santa dutifully fulfills them. But how? How is he supposed to manufacture millions of toys? Canon tells us that the elves help him. The North Pole is apparently one of the largest employers in the world. But who feeds the elves? Who pays for their housing? More critically, who funds the manufacture of all of these toys?

The industry at the North Pole must literally cost billions of dollars every year, and since they are in the business of charity, there is no income to sustain them. The only possible resolution to this problem is to say that private donors fund the North Pole’s lucrative industry. But for how long has the North Pole been functioning? It must be hundreds of years. Canon might tell us even longer. So there must exist a family who literally has trillions and trillions of dollars to fund the North Pole. But who are these people? Why do we know nothing of them? Not even Donald Trump and Bill Gates could fund the North Pole. Who is this incredibly rich and incredibly generous family? There do not seem to be any answers forthcoming. A more likely explanation is that this is one of 5 reasons Santa probably does not exist.

Santa is unknown in other parts of the world. Canon tells us that Santa delivers presents to children based on their merit. If they have been good throughout the year, then he will deliver these presents. However, there are several countries that do not celebrate Christmas and have never heard of Santa. These countries include Morocco, Thailand, Russia, Turkey, et cetera. Do children have to know about Santa for him to deliver presents to them? Suppose a mischievous parent tells their child that Santa does not exist? Is the child expected to believe in Santa in spite of what their parents said? Are children expected to believe in Santa even when they have not heard of him? Of course not, and canon tells us that he travels around the world delivering presents to children. He does not exclusively visit western nations. He visits the orientals. He visits the middle east. He visits Baghdad and he probably knew where Bin Laden was and yet did not tell us!

We are not just imposing what we want upon Santa. Canon tells us that he has traditionally gone around the world to deliver presents. But the fact that these people have not heard of him is quite telling. This is one of 5 reasons Santa probably does not exist.

There are no intellectuals who believe in Santa. While this may not necessarily serve as an argument against the existence of Santa, it certainly raises a few serious questions. It alerts us to what may be a flawed epistemology. For parents will relay the Santa narrative to their children at a young age and once they reach the age of sophistication, then they will tell them that Santa was just a silly myth and they were just having a laugh at the child’s expense. Once one reaches a certain age and intellectual minimum, they are required to deny the existence of Santa Claus.

Consider the fact that no sophisticated scientist believes in Santa Claus. But, as I pointed out in my article Is Belief In Santa Like Belief In God? there are scientists who believe in the existence of God – on the basis of the evidence. As Dr. Frank Tipler said, “When I began my career as a cosmologist some twenty years ago, I was a convinced atheist. I never in my wildest dreams imagined that I would be writing a book purporting to show that the central claims of Judeo-Christian theology are in fact true, and that they are straightforward deductions from the laws of physics as we now understand them. I have been forced into these conclusions by my own special brand of physics.” There is no comparable claim from a scientist about believing in Santa on the basis of the evidence. This is one of 5 reasons Santa probably does not exist.

If bad children get coal, then shouldn’t everyone get coal? There is a common belief that people are generally good and capable of doing more good than evil in their lifetime. Perhaps this belief may lead to a judgmental disposition. After all, if people are generally good, then they are better than those wretched sinners. The Santa myth seems to assume this doctrine. For it posits that children who are not naughty will get the presents that they asked for. But, children who are naughty will only find lumps of coal. However, if “all have sinned and fall short of the glory of God” (Romans 3:23) and “Nobody is righteous, not even one” (Romans 3:10) then what hope do children have of meriting these gifts? Further, how can a gift be merited? As Paul tells us, a gift is not given to the one who merits it. If it were, it would no longer be a gift, but something that was earned (Romans 4:4).

That is why when men come to God to be reconciled with him, all attempts to do so by their own merits fail, as I pointed out in my article Is Justification By Faith Or By Faith Alone? For all have sinned and all fall short of the glory of God. The only hope that we have is to put our trust in Christ. For when he was murdered, our unrighteousness was nailed to the cross and his righteousness was given to us and now we stand before God as though we had never sinned (Romans 3:21-25). If our hopes we in our own righteousness, we would be most of all to be pitied. Hence, the Santa narrative is dependent upon a doctrine that renders men most of all to be pitied. The biblical disconfirmation of the Santa myth is staggering and serves and the most powerful of the 5 reasons Santa probably does not exist.