Often we will hear atheists say that belief in God is just a crutch for those who cannot bear reality. It is something that some pathetic loser chooses to employ so that they do not have to bear the fact that they are eventually going to die, that they have to live alone in this universe, and so forth. In this way, atheism is thought of as the brave alternative. It is something for only those who are strong enough to bear it, something for only those who are smart enough and open minded enough to follow the evidence where it leads. However, far from it, I think an equal case can be lodged against atheism. I think there are at least 5 reasons atheism is a crutch. 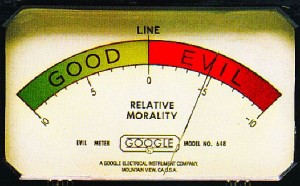 This is probably the most obvious example. People know that their conscience convicts them of the evil that they have committed. They know that if God is good, he must give justice to guilty sinners. He cannot just let them go, otherwise he would not be a good and just judge. Since every liar will have their part in the lake of fire, and everybody is a liar, we choose to remove the existence of God, so that we will not be morally accountable to God. If there is no God, there is no justice; no justice for you or I, while we have sinned against God.

In the end, atheists are willing to admit this. They will say, “I am accountable to myself,” or “I am accountable to other people.” But how much less severe is that? If we like what we are doing, we can simply change our moral stances, or just ignore our conscience. Morality changes all of the time, especially as we get used to doing bad things. This non-intimidating framework of moral accountability is obviously desirable for the person who wants to indulge in their sin. So the atheist removes the judge, and leans on the crutch of atheism.

2 – Atheists suffered while they were a Christian.

When posed with the problem of evil, most Christians are perfectly willing to say that it is part of God’s plan, that he has morally sufficient reasons and they simply trust in him. This is a position that they will intellectually take. But when tragedy actually strikes, their emotions soar powerfully in opposition of their faith. They ask how God could allow such a thing to happen to them. Though they intellectually know that it does not serve as an argument against God’s existence, the emotional factor of God allowing it to happen is too much for them to bear. In great anger, they declare that there is no God.

Of course, this form of false conversion is just a consequence of modern theology. Modern theology teaches that Christianity can give you health, wealth, fame and happiness. When the it does the opposite (as Christ promised it would) they become very angry in response. Out of anger toward the God who failed them, and those who lied to them, they declare that it is all a myth, and that there is no God. Atheism is a crutch in this way, because it helps them to deal with the anger that they feel.

3 – If God exists, their loved one went to Hell. 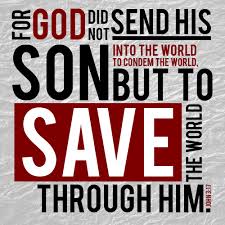 It is very difficult to say whether anybody has went to Hell. It is not at all implausible that while this person knew that they were dying, a great fear struck their heart and they cried out to God, were able to have true repentance and throw themselves on his mercy. Regenerations can happen in a mere second. That is why Jesus said, (John 3:8) “The wind blows where it wishes and you hear the sound of it, but do not know where it comes from and where it is going; so is everyone who is born of the Spirit.” Rebirth is based solely on the drawing of God, so it is very difficult to say that one person truly did go to Hell.

However, by all accounts, to the non-believers mind, if Christianity is true, that means their loved ones have faced the righteous judgment of God. But who could live with such a thought? If somebody does not already trust in God, who could really bear this idea? Since they are unable to bear the idea that their loved one has faced God’s wrath, they declare that there is no God, and therefore no wrath that their loved one had to endure. So, atheism is a crutch that helps them to deal with the

4 – If God exists, they have to trust a father figure. 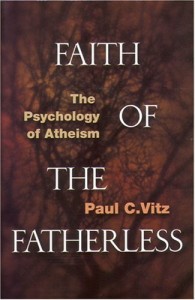 This position was outlined by a professor of psychology at NYU, Doctor Paul Vitz in his book The Faith of The Fatherless. He explained that when a male has a father figure that is inadequate in some way, (or possibly died) it would follow that they had psychological difficulties when putting their trust in any father figure. They will find the idea of putting their trust in a figure similar to that which has hurt them to be repulsive.

Since many fathers, today, are abandoning their children (or perhaps tragically dying), people who are victims of such a thing find it so difficult to put their trust in another father figure. After all, a previous father figure hurt them. So they have a psychological, or perhaps subconscious, disposition to avoid putting their trust into yet another father figure. As a consequence of this, they reject their Father in Heaven. In this way, atheism is a crutch that helps them deal with the anger they feel toward their own fathers.

5 – As an atheist, they can appear as intellectual elitists.

With everybody around them believing in God, all of their friends and family, to go along with the crowd is just not something that seems appealing. Everybody believes in God. Why should I believe in God too? In fact, they realize, if they contract the norm of belief in God, they will be able to give objections that people have never heard before.

When they quiz the religious about their belief in God, and the reasons to believe, the philosophical aspect is not something which they have previously encountered. They are taken aback by their terms such as the burden of proof and the insurmountable who created God? argument. Coming from such an unfamiliar angle, they appear to be an intellectual elitist. They are therefore able to overcome your previous insecurities (perhaps even subconscious insecurities) about their own intellect, through atheism. Thus atheism serves as a crutch for those who are insecure about their own intellect.