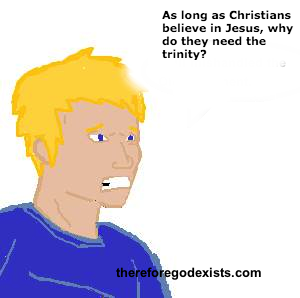 How many angels can dance on the head of a pin? I am not aware of any theologian who has investigated this matter, and unless there is some discourse in philosophical theology of which I am bereft, this is probably not a question that we can answer with our intellectual or theological resources, and there probably is no answer. As CS Lewis pointed out, many of our great theological questions are likely nonsense, as if to ask, ‘How many hours are in a mile? Is yellow square or round?’ When somebody (or even someone claiming to be a Christian) hears bickering about the trinity, they may be inclined to see it as our laboring to answer a nonsense question. After all, how could one really know? The trinity states that there is one God who is eternally present in three persons – the Father, the Son, and the Holy Spirit. How could we really know if that were true? And does it really matter if we hold in the depth of our mind this theologically precise concept? Does it really matter? Well, throughout the generations, the church has recognize the centrality of the doctrine of the trinity. Christians need the trinity. 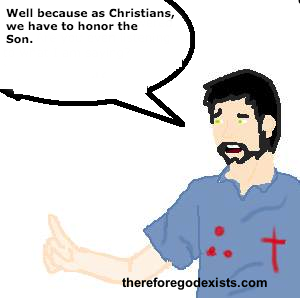 However, I can sympathize with the person who struggles with this. Perhaps they have a non-trinitarian friend, and they seem like they are a faithful Christian. Do we really need to do anything other than believe in Jesus and try to serve him? Do we need to have the correct list of beliefs? The trinity is so abstract as to be almost irrelevant, right? How can we really suggest that everyone must believe it? How can we say that Christians need the trinity? Well I would like to labor the point that Christians need the trinity because it makes sense of the biblical and philosophical data and it is the only possible model that ascribes much honor to God, while the other models dishonor him. 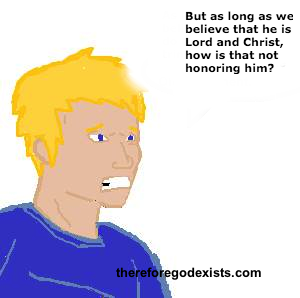 The trinity is the only model that honors the Son. Throughout the Old Testament, we read of accounts of the sins that God’s people committed against him. They intermingled with the Pagan nations and adopted their religious practices and rituals. They worshipped other deities besides God. But imagine that one of their crimes was to say that this deity, YHWH, was not the one true God. He was merely a powerful entity, not the supreme Creator of the cosmos, but just one among a pantheon of gods. He is a powerful being, like an angel, but not God. Would this be to honor God? Would such a belief be rightly considered orthodox? How can people steal the glory that is due only to God and give it to others? As God said in Isaiah 42:8, “I will not give my glory to anyone else.” When people say that the Son, Jesus, is not God, they are guilty of precisely this crime. They are like the people who say that YHWH is just an angel, a powerful entity, one of many gods to be feared and to butter up. 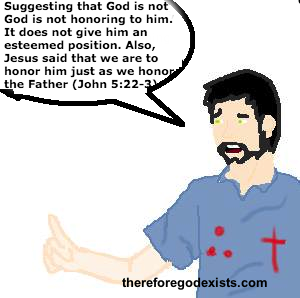 It makes sense of the relationship between Jesus and the Father. If you are theologically savvy, you might have noticed a glaring objection to my last subsection. There is another model that honors Jesus as God and is non-trinitarian. It is known as Oneness Pentecostalism. This is the view that the Father, the Son, and the Holy Spirit are just modes that God takes on. They are manifestations of the same person. Hence, Jesus is the Father, the Son, and the Holy Spirit and so is God. Does this not preserve the honor that is due to the Son? Well, first, it does not, because a Oneness Pentecostal would deny that the Son is God. They believe that the divine nature is the Father and the human nature is the Son. The Son is not deity and is not honored as the Father is. Hence, this model does not honor the Son and collapses as being a dishonor to God under John 5:22-23.

Further, this model makes no sense of the relationship between Jesus and the Father. As I pointed out in my article Does John 17 Teach Oneness Or Trinity? if Jesus is both the Father and the Son, then the intense prayer and the reliance upon God that we see, the perfect model of obedience is just an illusion. For when we have one person praying to another, the instantly accessible reality is that there are two persons present. If Jesus is praying to the Father, one can hardly be blamed for thinking that Jesus is not the Father. If I refer to a conversation that I had with a man named Bill, you would instantly gather than there were two distinct people present for this conversation, namely, Bill and I. Christians need the trinity because it makes sense of the relationship. If Jesus is both the Father and the Son, then he is wearing a disguises, he is putting on a show, he is fooling us. Christians need the trinity because the relationship between the Father and the Son is genuine.

But just think of how this dishonors God. As Dr. John Walton pointed out in his book The Lost World of Genesis the reason that we see God creating the heavenly host in a chronological order, with everything outlined, is precisely because Pagan traditions taught that all of these objects were gods. So the Bible exposed them as being inanimate objects because there is one God who created the heavens and the earth. It is a dishonor to them. The one who says that the Holy Spirit is an impersonal force does the very same thing. Further, to say that one sins against an impersonal force is to talk nonsense. It is like if I find a piece of paper with a list of rules. If there is no personal force behind it, then it has no authority. If I discover that a monarch wrote that list of rules, then it has authority. One can only sin against a person. Since people sinned against the Holy Spirit (Acts 5:3, Mark 3:28-30), it follows that the Holy Spirit must be a person. The only model that retains this reality is the doctrine of the trinity. Christians need the trinity lest they dishonor the Holy Spirit by comparing him to a mute, dumb, deaf, blind idol.

The trinity makes sense of God’s love. There is a sub-discipline within philosophical theology known as perfect being theology which posits that we can learn about the Deity by discerning which attributes a perfect being would have, for God is the greatest conceivable being. God could not be stupid or impotent because these do not comport with what the greatest conceivable being would be. But similarly, the greatest conceivable being would also be all-loving by his very nature, for it is obviously better to be loving than unloving. As Jesus said in Matthew 5:43-48, as a reflection of the Father’s perfection, he is loving. As 1 John 4:8 tells us, God is love. This means it is part of God’s fundamental nature to love. If he were not love, he would not be God. But then the question arises: before God made his creatures, who did he love?

One cannot say that God did not love anyone for all of eternity, because then he would not be essentially loving. We are also not permitted to say that God created humanity as an expression of his love, because that would entail that human beings were metaphysically necessary, that God was contingent upon his creation. Rather, it must be the case that God exists as more than one person. As Richard Swinburne pointed out in his book Was Jesus God? the Father must have begotten Christ – from eternity – so that they could love each other. But also, the Son must have begotten the Holy Spirit, because, argues Swinburne, as an expression of love, you would want to share your love with someone else. Since there is no other reason for other persons to be begotten, the Holy Trinity exists as a necessary expression of God’s love.

Does Truth Matter? We live in a culture that tells us that truth is something like an abstraction. It does not matter so much as what makes a person happy. If believing something about the world makes somebody happy, that will become their truth. But what if their truth is dishonoring to God? What if it does not honor the Son as it honors the Father? What if it renders the relationship between the Father and the Son a vain spectacle, a charade, a game that Jesus is playing with us? What if it makes the Holy Spirit into a mute, dumb, blind, deaf idol? What if it belittles the doctrine that God is love? Christians need the trinity because what we want to believe is not significant. What is true and honoring to God is what is significant.

A true Christian will believe the trinity and they will strive to honor God. For when we contort God to fit our human constructs, we become guilty of idolatry. Christianity is not a matter of believing anything we want to believe. We believe what God has revealed to us. God has revealed the trinity to us in his holy word, at the incarnation of his Son. When his Son came into the world, the full revelation of the trinity came with it. We needed to understand who the Son was and how he related to the Father. We needed to understand that it was God dying on the cross. The one who has existed from eternity, who is an expression of the love of the Father, came to earth and died on the cross. His name is Jesus Christ and calls all men to repent and believe in him. For all who do not honor the Son do not honor the Father.