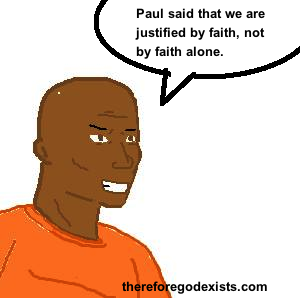 In Romans 3:28, Paul said, “For we maintain that a man is justified by faith apart from works of the Law.” This means that we are saved the moment that we put our trust in Jesus for our salvation. We recognize that he died on the cross for our sins, in our place, and because of that, we stand before God as though we had never sinned. That is Paul’s conception of justification and how the cross applies to our lives. Dissidents of Paul’s doctrine of justification will labor the point that Paul thought that we are justified by faith, but not by faith alone. The implication is that it is not enough to trust in Jesus for our salvation. Rather, when Paul argued that we are justified by faith, he was only pointing out one element of salvation. If we read Romans, we discover the necessity of faith, but not the sufficiency of faith. If we read other passages, we will discover the necessity of works and baptism and so on. Faith is merely part of justification. But it does not exhaust justification. Is that true? Is justification by faith or by faith alone? 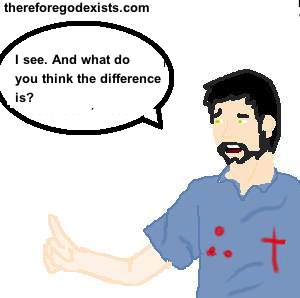 Romans is a systematic treatise on justification. The letter to the Roman church is unique in the way that it presents its’ theology. Paul and the other writers of the New Testament are usually reacting to something that is going on in the church. They usually do not present systematic summaries of doctrinal truths. But that is what we find in the book of Romans. Paul treats the doctrine of justification in the book of Romans so that his audience will have a full understanding of what it means to be justified and in Christ. We may follow the flow of his reasoning and see where the doctrine of justification peaks. In the first chapter, he portrays the wrath of God against sin. In the second chapter, he recognizes that his Jewish audience might have nodded in approval against the condemnation of the Gentiles, so Paul robs them of their pride and says that God’s wrath falls upon everybody. If you are going to say that you are righteous, you have to keep the Law perfectly. Since they have not done that, they are under judgment. This leads him to say in chapter three that “by works of the Law, no flesh shall be justified,” (v. 20). For nobody can keep the Law. Everybody has sinned and is subject to God’s wrath. This invariably leads to his discussion about justification in chapters 3-5. This is where he says, “To the one who does not work, but believes in him who justifies the ungodly, his faith is credited as righteousness.” After concluding his exegesis of Genesis 15:6 and discussion of justification, he answers objections to it in chapter 6. The flow of his reasoning is obvious. 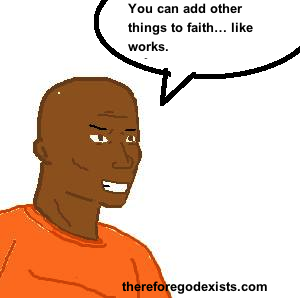 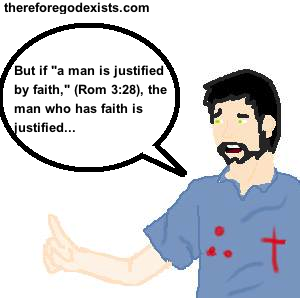 “To the one who does not work, but believes in him who justifies the ungodly, his faith is credited as righteousness.” (Romans 4:5). In this tremendous and powerful verse, Paul is expositing Genesis 15:6. He is offering his inspired interpretation of what it means that Abraham’s faith was credited as righteousness. In doing so, he says that the faith of Abraham was credited as righteousness. Abraham’s faith is treated as if it were outward righteousness of works that one performs. His faith is the substitute for a life of perfect obedience to the Law. Just think for a moment of a person who labors for their entire life, keeping every moral precept of the Law. If somebody did that (nobody aside from Christ could do that), God would give them eternal life, because they were righteous. Well, that righteousness is credited to Abraham. It is credited to him by the mechanism of faith. Is justification by faith or by faith alone? Paul’s inspired interpretation of Genesis 15:6 and application to the contemporary Christian reveals that it is by faith alone.

This means that Paul denied that water baptism, a lifetime of obedience or anything that we could conceivably add to our justification are not prerequisites to salvation. A person is justified by the mechanism of faith alone, which is the free gift of God. To the person who adds to his gospel, he pulls no punches, writing, “O foolish Galatians! Who has bewitched you?” (Galatians 3:1). “You have been severed from Christ, you who are seeking to be justified by law; you have fallen from grace.” (Galatians 5:4).

Justification is a free gift. Imagine your employer said, “I have a gift for you,” and handed your paycheck to you. You might be insulted. That is not a gift. You worked for it. You earned it. Similarly, imagine you gave somebody a gift for Christmas and they opened their wallet, asking, “Okay, what did this cost?” They want to pay you for it. You emphatically tell them that it was a gift. They do not and cannot pay for it. If they were to pay for it, it would no longer be a gift. It would be something that they bought. If you work for your money, it would not be a gift, it would be what was earned. This means that when Paul says, “The wage of sin is death,” he is saying that what we earn by sinning is death. But he adds, “The free gift of God is eternal life in Christ Jesus.” (Romans 6:23). If eternal life is a free gift, then there is nothing that we can give to God in exchange. We cannot offer a lifetime of obedient faith for which we will receive our justification. As Doctor James White pointed out, we can only receive it by the empty hand of faith. If we have anything in our hands to offer, it is no longer a gift.

You might be inclined to suggest that these are the descriptions that Protestant theologians have applied to gifts. But gifts can be bought. However, this is not my argument, but Paul’s. Paul argues in Romans 4:1-2, “What then shall we say that Abraham, our forefather according to the flesh, has found? For if Abraham was justified by works, he has something to boast about, but not before God. For what does the Scripture say? ‘Abraham believed God, and it was credited to him as righteousness.’ Now to the one who works, his wage is not credited as a favor, but as what is due.” That is precisely the same argument that I just rendered. Paul did not think that it was possible to work for your salvation. That is why he said, “For this reason it is by faith, in order that it may be in accordance with grace…” (v. 16). Justification can be by the grace of God only if it is receive by the empty hand of faith. Is justification by faith or by faith alone? It can only be by faith alone. Paul’s argument disqualifies any form of justification that adds to faith.

Paul writes in Galatians 2:17-20, “But if, while seeking to be justified in Christ, we ourselves have also been found sinners, is Christ then a minister of sin? May it never be! For if I rebuild what I have once destroyed, I prove myself to be a transgressor. For through the Law I died to the Law, so that I might live to God. I have been crucified with Christ; and it is no longer I who live, but Christ lives in me; and the life which I now live in the flesh I live by faith in the Son of God, who loved me and gave Himself up for me.” The reason that he said that was because in verse 16, he said that we are justified by faith and not works of the Law. The next logical question is whether we can live in sin. But the only way that this logical consequence exists is if the preceding argument is that justification comes by faith alone.

In response, you might say, “No, no, you have misunderstood,” for one reason or another. Perhaps you think that the sacrifice of Christ removed our original sin, or that he died for only some of our sins. But note well that this is not my argument. This is Paul’s argument. He wrote in Galatians 2:21, “I do not nullify the grace of God, for if righteousness comes through the Law, then Christ died needlessly.” He was unaware of the doctrinal developments that you have conjured up. He simply said that if righteousness enough could come by the keeping of the Law, it follows that Christ died needlessly. Notice also that this argument would apply to any model of justification by works. If we could live a life of obedient faith so as to warrant God’s acceptance, in any capacity, then Paul says that Christ died needlessly.

Is justification by faith or by faith alone? Men desperately want to be co-redeemers with Christ. They want to feel as though they have something to boast about before God. They want to work for their salvation. But God grants salvation as a free gift to any who will open their hands in faith. But that faith is necessarily alone, or it would not be a justification that comes by faith. Paul could never say that God is the justifier of the one who has faith in Jesus if the one who has faith in Jesus is not justified. I realize that you have a number of objections pertaining to other passages. But we have to remember that Paul’s letter to the Romans contains his systematic treatise of justification. So the second chapter of James needs to be interpreted through the lens of Paul’s systematic treatment on justification. For those who think of raising that objection, though, I reference you to my article Does James 2 Teach Salvation By Works? and my series on Justification By Faith Alone for other objections.