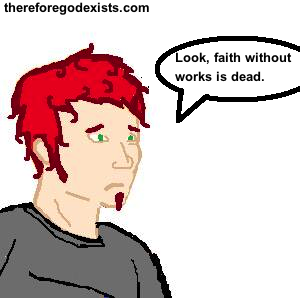 False religions throughout world history has men trying to earn favor with God by their own merit. They show God how much they are worth, and God chooses them above the others. When they do good works, God becomes their debtor and owes them eternal life. It is ironic, though, that the message of the Bible since the beginning of time has just the opposite. God tells his people to just put their trust in him. But instead, men have put their trust in their own works. They put their trust in their capacity to lay on beds of nails, pay the penance, and do good deeds. They have put their trust in themselves, their tradition, and their religious system. Even some who bear the title ‘Christian’ have ruptured their faith by falling into such a system, and they will appeal to James 2. So the question is, does James 2 teach salvation by works? 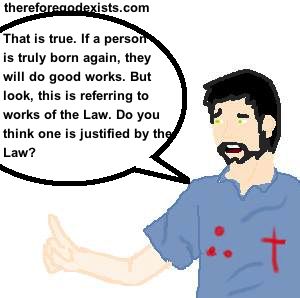 For us to understand this issue, I would call you to read the relevant verses. James 2:14-16, 21-24 What use is it, my brethren, if someone says he has faith but he has no works? Can that faith save him? If a brother or sister is without clothing and in need of daily food, and one of you says to them, “Go in peace, be warmed and be filled,” and yet you do not give them what is necessary for their body, what use is that? Even so faith, if it has no works, is dead, being by itself… Was not Abraham our father justified by works when he offered up Isaac his son on the altar? You see that faith was working with his works, and as a result of the works, faith was perfected; and the Scripture was fulfilled which says, “And Abraham believed God, and it was reckoned to him as righteousness,” and he was called the friend of God. You see that a man is justified by works and not by faith alone.” 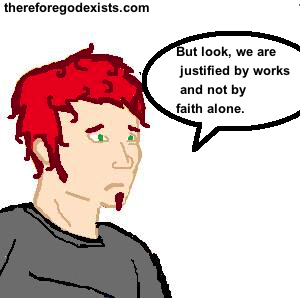 As we read things like, faith without works is dead, and you see that a man is justified by works and not by faith alone, one can understand how a good Protestant might be taken aback, because on the surface, it seems to stand in opposition with Paul’s doctrine of faith alone. But, context kills heresy.

To whom is James speaking? We see in the beginning of the letter that James is talking to the Jews who were scattered abroad (1:1). These people lived their lives entrapped by the confines of legalism. They are told that they must measure up, keep the law of Moses, earn the favor of God. That is the system that they spent their lives in. But then they heard the Good News of Christ. God loves them in their sins, as unbelievers, and that Christ finished their work on the cross. Now they need only put their trust in him. What a joyous discovery! 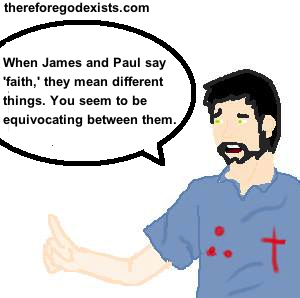 Well, people are inclined to rush from one extreme to the other. Throughout church history, men have continuously attempted to reduce Christian theology to a mere creed that one recites, like a vaccine. But not something that is evident in their daily life. That is what James was dealing with here. He compared their faith to the person who promises to help, then does not fulfill that promise (v. 15-16). They are somebody who just recites a creed, but does not keep the commandments of Christ. That sort of faith is absolutely useless. It is dead. Indeed, as James goes on to argue, that is not faith at all. Does James 2 teach salvation by works? If we are to answer this question, we need to understand the audience and the occasion of the letter.

To what sort of works was James referring? Those who propagate this interpretation will often raise a distinction between works and works of the Law. When Paul said, “to the one who does not work, but believes in him who justifies the ungodly, his faith is credited as righteousness,” (Romans 4:5), they will say that he was referring only to the Law of Moses. He was undoing the restrictions of the Torah, and putting a new system of works in its’ place. (By the way, I dealt with this objection in my article, Does Romans 3-5 Exclude All Works Or Just Works of The Law?) In this way, the works to which James is referring to cannot be the works of the Law. If it were, then James would be teaching that one is justified by doing the works of the Law. But that is a proposition that even the most ardent advocate of works-righteousness will deny.

But James is referring to the works of the Law. He writes in verse 8, “If, however, you are fulfilling the royal law according to the Scripture, “You shall love your neighbor as yourself,” you are doing well.'” He goes on to say that if you stumble at one point of the Law, you have broken the entire Law (v. 10.) He cites two of the commandments (v. 11). James’ central point in this chapter is that if you have faith, you will keep the Law. If James is teaching that one is justified by works, then he is teaching that one is justified by works of the Law. This would reduce the Roman Catholic apologist who advocates for works-righteousness to the position of the Pharisee or the Judaizer. One must keep the Law to be righteous. However, all Roman Catholics and all who identify as Christians and hold this stance will deny that. Does James 2 teach salvation by works? If it does, we must also concede that one must keep the Law to be saved. Thus, this interpretation is guilty of reductio ad absurdum.

Faith without works is dead. A person might rightly say, “Look, you have your faith. I have my works. How will you prove your faith to me? I will prove my faith to you, by the works that I perform.” (v. 18). That is ideal faith. That is what faith should look like. That is faith that is alive. But the faith of which James speaks is the faith that makes empty promises (v. 16). It is the faith that merely makes a claim. It is the mental assent of a proposition. But it is not biblical faith.

James objects to this sort of faith, arguing that even demons have mental assent of the same propositions (v. 19). If a person has biblical faith, Abrahamic faith, the faith that Paul speaks of when he says, “to the one who does not work, but believes in him who justifies the ungodly, his faith is credited as righteousness,” then they have been born again. They have been made a new creature by the power of the Holy Spirit (2nd Corinthians 5:17). They labor daily to live by God’s Law, not for their justification, but in their sanctification. Salvation comes by grace alone through faith alone. But, the product of salvation is a changed heart and a righteous lifestyle. That is what James is zooming in on. They do not live righteously. They are not changed by the spirit. They have not been born again. Does James 2 teach salvation by works? No! It is a warning against sin. It is a condemnation of antinomianism. It is the claim that true saving faith will bring forth a righteous lifestyle. If it does not, then your faith is dead. You do not have true faith.

How was Abraham justified? It is quite ironic that James used the very same text that Paul used in Romans 4:5. Abraham believed God, and was credited to him as righteousness. Perhaps this church commonly used this verse to justify their immorality. So James applied it to make the point that I made above. But he used it in a way that is very different from how Paul used it. Paul used it to say that Abraham was saved by faith at that moment. James said that it was not fulfilled until Abraham later did good works (v. 23). They are clearly using the same verse in a very different way. If this were an exegesis of scripture in the historical-grammatical method, then either Paul or James would be wrong.

But it is not an exegesis. Paul, and James, and the ancient near east as a whole were working within a very different methodology. Rather than exegesis, they were part of what we have coined inner biblical interpretation. Within this system, they were not concerned with what happened in the past. They were concerned with using the past to explain the present. The present was what mattered, and the past could be contorted to suit it. If that strikes you as dishonest, keep in mind that they were not trying to fool anybody. Everybody was aware of this approach to holy writ. Everybody applied it. So James can use Abraham in a way that is very different from Paul. (I realize that many people will find this confusing and probably have never heard of it before. I refer you to my article Did Paul Take Verses Out of Context?)

Does James 2 Teach Salvation By Works? This is because works demonstrate our faith. It is like wearing a parachute and jumping. There is no point in believing that the parachute can save you, if you are not going to show your faith by your actions. So the message of James: do not merely claim to be Christian. Prove that you are a Christian. Let your light shine before men in such a way that they may see your good works, and glorify your Father who is in heaven. (Matthew 5:16) If you refuse, then you may not really be a Christian.

We have to remember that James was dealing with something different from Paul. James was dealing with people who reduced Christianity to a creed. Paul was dealing with legalism. They use similar language, but in different contexts and with different meanings. It is by grace that you have been saved, through faith. It is the free gift of God, not of yourselves, so that no man may boast (Ephesians 2:8-9). But the evidence of that saving faith is that you will be born again, made a new creature (2 Corinthians 5:17), bringing forth the fruit of the Spirit (Galatians 5:22-23). You will show your faith by your works.