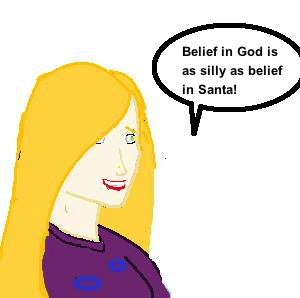 People are typically very superstitious by nature, and as such, are very receptive to myths about Santa Claus as they are children. Children are taught that a jolly character named Santa Clause arrives on the eve of December 24th, and brings gifts to all of the children who behaved, and brings coal for all of the children did not behave. There are elaborate stories of Santa commanding a tribe of elves in the wonderful wintery abode known as the North Pole, complimented by reindeer who can fly and help Santa to deliver gifts to every child in the world, arriving by plummeting through the living room chimney. Sometimes this type of belief is mockingly compared to belief in religion, and belief in God. So is belief in God like belief in Santa? 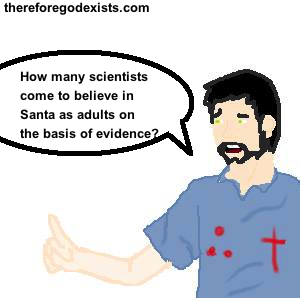 As we tell elaborate stories about Santa that are ultimately not true, but nonetheless dear to the hearts of children, so people also keep stories that are ultimately not true despite how much passion they hold about these beliefs. So when a child comes to learn that Santa is not real, they should also come to understand that God is also not real, assorting him with the Easter Bunny and the tooth fairy.

With that in mind, this is how many children regard the existence of God when they are taught about Santa. When parents make metaphysical claims that are not true, children sometimes make the connection to other metaphysical claims that are made. When parents tell children to believe in giant bunnies, elves, flying deer, and are found to be lying, their children sometimes think that they are also lying about the existence of God. This comparison is drawn not only by children, but many adults. So then, is belief in God like belief in Santa?

Why Do We Not Believe In Santa?

This comparison between belief in God and belief in Santa is not really an argument against the existence of God. Rather it is to say that we do not believe in Santa, because there are no good reasons to believe in Santa. We cannot disprove the existence of Santa, but are all rational to accept that he does not exist. So the same with our belief in God. The problem, though, is that this does not represent our non-belief in Santa.

Who Believes In God?

Many of these people who are convinced of the existence of God are eminent philosophers and scientists, sometimes even atheists. Now I have never met somebody who did not believe in Santa Clause, who later came to accept that he existed. Belief in God varies from the uneducated to even the highly educated. Scientists such as Anthony Flew and Robert Jastrow come to believe in the existence of God on the basis of the evidence of the physical world. Dr Frank Tipler said of his belief in God, “I have been forced into this conclusion by the inexorable logic of my own special brand of physics.”

Many scientists believe that there is strong evidence for the existence of God. They will cite the fine-tuning of the cosmos for intelligent life, or the DNA molecule, or the absolute origin of the universe. These reasons for belief in God are so compelling as to leave many scholars of science aghast, and only those who are already dogmatically committed atheists are not intimidated by what Robert Jastrow called, “the best evidence for the existence of God to come out of science, ever.”