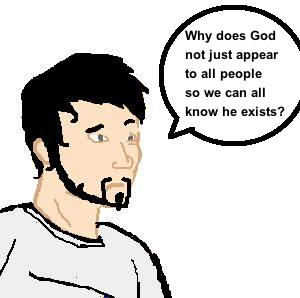 Our belief in God is often described as something that we can just see plainly as a consequence of the existence of the world, for it is obviously not rational to believe that nothing created everything. When speaking of our knowledge of Christ, the inerrancy of the Scripture and so forth, we might appeal to the internal witness of the Holy Spirit, that we know that God has revealed himself to mankind in the Scripture because he has revealed himself to us on a personal level. We know the Lord as we might know another human being. I would say that these are the most usual epistemological sources for certainty of Christian theology. But we might ask, why are they even necessary? If God were visible, we would not need them. Therefore the question that arises is, why is God invisible? 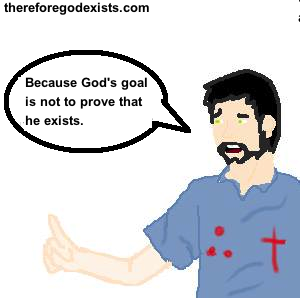 While many philosophers recognize that it is possible to reason to the conclusion that God exists by way of forensic evidence, we still ponder why we need forensic evidence at all. Why does God not just make himself known to all people of the world, declaring with booming voices across the sky that Jesus Christ is Lord? Why not hover in the sky crossed arms for all of the world to see as they look up into the sky?

Well, the immediate answer would be that God is immaterial and aspacial, and therefore could not be contained by the material and spacial world. However he could still manifest himself in some way that is visible to all people at all times, even if God in his fulness could not necessarily be revealed to us in that way. This is something that is consistent with the Bible, in that it tells us in 1 John 4:12 that nobody has ever seen God.

But why is that? Why is God invisible?

At face value, it may seem as though God being visible to all people would help to achieve his end since it would certainly make everybody aware of his existence. Indeed if God’s goal is to make all of mankind aware of his existence, booming voices across the sky or some sort of visible manifestation would be quite effective. The problem, though, is that God’s goal is not to bring people into knowledge of his existence. As Romans 1:20 tells us, “For since the creation of the world God’s invisible qualities—his eternal power and divine nature—have been clearly seen, being understood from what has been made, so that people are without excuse.”

The Bible tells us that God has left sufficient forensic evidence for us to believe that he exists, so that is not his goal for mankind. But rather God’s goal for mankind is for us to come into a loving relationship with him, freely. In light of this goal, there is no reason to think that a visible manifestation or booming voices across the sky would serve any function. Showing people that God exists may be of no affect in bringing them into a loving relationship with him. They may just not want him either way.

This can be demonstrated in that many people do believe that God exists, in fact know that he exists, and yet are not in a relationship with him because it is not what they want for their lives. From this I think it follows that assuring men of God’s existence may not necessarily draw people freely into a relationship with him, and therefore there is just no reason for God to reveal himself in that way.

What Would Visibility Do?

It may even be argued that visibility would have a negative effect on bringing people into a loving relationship with God of their own accord. If God were hovering in the sky, men might feel as they were being compelled to act in a certain way and being stripped of their autonomy. Something like how teenagers become angry and rebel in response to overwhelming parental strictures.

In this way, visibility may bring people further away from a relationship with God, even if it makes them aware of his existence. This is a behavior that we see all of the time in children and anybody who is forced into a situation where there is an overwhelming and overriding authority. Our society would be radically different from what it is now, and far from guaranteeing that men would behave better, I submit that many would display a conduct that is even more depraved than what is now present.

For this reason, as a logical argument against the existence of God, this does not really threaten anything, and as a purely intellectual question for Christians to ponder, I think the answers I have provided are quite sufficient.