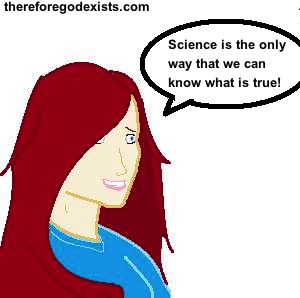 There seems to be an inordinate respect for men in the field of science in our society. Now that is not to say that we should disrespect scientists, however people tend to give scientists authority in fields that they do not have authority. There is popular meme that reads something like, “98% of the National Academy Of Sciences are atheists.” However that seems to me like saying that there was a poll that a high amount of people who own small businesses are atheists. It leads one to just say, “so what?” Scientists are not in a position to authoritatively say whether God exists. But our society has adopted a sort of empiricism wherein the word of the scientist is the ultimate answer, and there is no other way of coming to know truth. But is science the only way of knowing truth?

In many of the discussions that I have, that certainly seems to be the consensus of people who do not believe in God. Philosophy is treated as though it were irrelevant; our ability to answer a question through reason is treated as subordinate to the expertise of scientific circles. 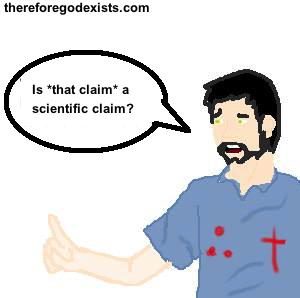 The iconic atheist and physicist, Lawrence Krauss, has made the claim a number of times, “Deductive arguments do not work.” Remarkably, Doctor Krauss has deduced that we cannot learn anything through deductive arguments. Only scientific discoveries can really resolve issues, because, he argues, our brains were evolved for survival, and not for learning truth about the world.

People tend to believe this sort of thing, not because it is intellectually tenable, but because it is coming from the mouth of a scientist. Lawrence Krauss is not an epistemologist, but is speaking authoritatively about how people come to know truth, and people are taken in by these arguments. So the same with Richard Dawkins’ The God Delusion. He is a biologist, and speaks authoritatively on issues of philosophy and theology, and people listen to him because of his expertise in his field.

Scientists are given an inordinate amount of respect in fields that are not even their own. When contemporary science yields some answer about some truth, people faithfully accept that answer, despite that the word of the scientist is like shifting sand.

Science Is A Slave To Philosophy

There is information and knowledge about the world that science is literally incapable of demonstrating. Science cannot demonstrate that science is a valid form of knowledge. That would be circular. Just think about it… is the claim, “Science is the only way of knowing truth,” a scientific claim? No! It is a philosophical claim. To make the problem even worse, the claim, “science works,” is a philosophical claim, that cannot be proven by science, lest, again, they reason in a circle. The scientist must presuppose that their own method is valid based solely on a logical inference.

Suppose it were the case that logical inferences were inadequate. It would follow that evidence and even proof of X could be present, but it could still be the case that X is false. The notion that empirical evidence and proof are indicators of truth is not something which can be established in the absence of logic. In a world without logic, probability does not increase from evidence; conclusions do not follow from proof.

Science is therefore desperately dependent upon philosophical presuppositions of rationality.

What Would The World Be Like If Logic Were Not Valid?

There are practical situations where logic and philosophy are necessary to live rational lives. The absence of these elements would alter how we relate to people and how our sense would fail in the absence of a logically based reference point. We could make observations about the world, however, we could not draw logical conclusions from them.

Suppose a husband were to walk home and find his wife puckering her lips, moving toward another man. Since this person can only make observations, but not draw conclusions from the observation, he would have to accept his wife’s excuse, that while the evidence may indicate cheating, that she was not in fact cheating. Empiricism can indicate the physical observations, but it cannot indicate what follows logically from them. He must appeal to reason to conclude that his wife was cheating on him.

But if reason were inherently not valid, it is impossible to determine if she was cheating, or if we were just fooled by our flawed reasoning. In a world in which we cast doubt upon our logical deductions, it is impossible to know if anything is true at all, and impossible for us to understand our world.

Then, is science the only way of knowing truth? Far from it, it seems to me that this view is not only irrational, but it radically and fundamentally compromises our world. But if this system were applied universally, I say without exaggeration: all human progress would be halted. Science departments in every university would be shut down, for intertwined within science is a plethora of assumptions that would be unjustified if logic itself were unjustified.

Our lives would radically change if logic were unjustified. Nothing, not even empiricism, would be rational. Every statement, no matter how ridiculous, would be of equal merit, and intellectual chaos would gain supremacy.