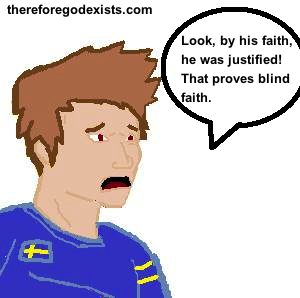 Suppose you were to encounter an adult who believed in the tooth fairy. When asked how he knows that the tooth fairy exists, he told you that while he has never observed the tooth fairy nor has any forensic evidence for its’ existence, he just has faith that the tooth fairy exists. He just believes, blindly, for no reason other than the fact that he believes. Of course this sounds absurd to many of us, however there are a number of Christians who have taken a very similar stance. There are people who say that they believe that Christianity is true just because they have blind faith. But what is a biblical approach to faith? Did the apostles encourage blind faith?

When Abraham was justified for his faith and deemed righteous, is that to say that he finally came to believe that God existed blindly? Not at all, rather it is to say that Abraham put his trust fully in God. 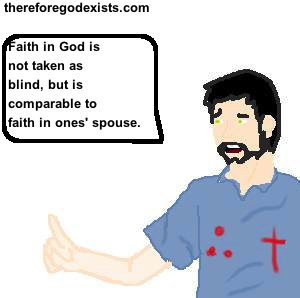 However there is a certain element of show, don’t tell, which is a principle in creative writing wherein the author, rather than just making a statement about what the character is thinking or feeling, will have them perform an action to show how they are thinking or feeling. This is a principle that the apostles seemed to have applied as well when they were evangelizing. While they could tell the Jews and the Greeks about their relationship with God, this would be less than convincing. So instead they decided to show the Jews and the Greeks using reason, evidence, culture, and Scripture, to demonstrate that the claims that they were making were true.

How Did Paul Show That God Exists?

When talking about the existence of God and religious epistemology, Paul did not say that those of us who believe in God do so blindly and on no foundation at all. But rather he offered an argument from the creation and existence of the physical world, namely he argued that if creation exists, there must have been a Creator. “For since the creation of the world God’s invisible qualities his eternal power and divine nature have been clearly seen, being understood from what has been made, so that people are without excuse. For although they knew God, they neither glorified him as God nor gave thanks to him.”

Indeed this argument has been adopted by many eminent philosophers, the most widely known being the Liebniz Cosmological Argument. Paul the apostle set the foundation for some of the most stunning and brilliant apologetics and philosophy with this little observation. So did the apostles encourage blind faith? Paul the apostle certainly did not.

When I say Cultural Apologetics, I mean an approach to evangelism which exposes the weaknesses in a certain set of beliefs within a culture and explains how it is that the gospel reconciles those weaknesses. This is a form of persuading people that what they are saying is true, and was employed by the apostles when encountering Jewish and Pagan tradition.

In Romans 2, when confronted with the Jews’ emphasis on the legalism, he argued that while it is true that everybody who keeps the law will receive glory, honor and peace, nobody has kept the law. They only preach the law, but do not keep it. He poses the question, “You who boast in the law, do you dishonor God by breaking the law?” There was a fundamental problem in traditional Judaism, namely that they attempted to justify themselves by their own work, by keeping the law, and as Paul pointed out here, they all fell short.

This precedent continued as Paul encountered people of all different religious beliefs. In Acts 17, he encountered a group of Pagans, who believed in an “unknown god” (verse 23). I think in seeing this, Paul noticed that the Athens emphasized the greatness of God; that he was so great as to be unknown by men. So he built upon that by preaching to a group of philosophers and laymen about the greatness of God, how he does not dwell in a temple made by human hands, nor is he in need of anything that he have. Indeed Paul even appealed to the writings of their religious texts, in saying, “We are his offspring.” Paul used their religious ideas as a foundation to preach the gospel.

Did the apostle encourage blind faith? It seems to me that far from preaching blind faith, Paul taught people why they should believe. He essentially told both the Pagans and the Jews that some of their ideas were correct, but then led them another step further in teaching what they have missed.

When I say Scriptural Apologetics, I mean that the apostles used Scripture to prove that what they were saying was the truth, particularly this was effective when evangelizing the Jews, who hold the Old Testament to be authoritative, inspired and inerrant. So rather than telling the Jews to take his word for what he was saying, Paul told his people to search the Scripture to see if what he was saying was the truth.

As it is written in Acts 17:11, “Now the Berean Jews were of more noble character than those in Thessalonica, for they received the message with great eagerness and examined the Scriptures every day to see if what Paul said was true.” When Paul taught the truth of the gospel and attempted to convince the Jews that the Christ had come, he would do so with the authority of the Scripture. One might expect that he appealed to Daniel, Isaiah, perhaps the Christophanies.

Did the apostles encourage blind faith? It seems to me that they encouraged people to believe on the basis of the Scriptural evidence that they had. Fulfilled prophecies and the date and circumstances of the coming Christ, and that was evidence enough for the Jews who sought the truth earnestly and honestly.

The apostles were eye-witnesses to the life and death of Jesus Christ, they would appeal to their own eye-witness testimony to demonstrate the truth of what had occurred. As Peter said in 2 Peter 1:16-17, “For we did not follow cleverly devised stories when we told you about the coming of our Lord Jesus Christ in power, but we were eyewitnesses of his majesty. He received honor and glory from God the Father when the voice came to him from the Majestic Glory, saying, “This is my Son, whom I love; with him I am well pleased.” We ourselves heard this voice that came from heaven when we were with him on the sacred mountain.”

But if the listeners were not convinced simply by their own testimony, at the time of the writing, there were hundreds of people who experienced appearances of Jesus alive, after his death, with whom they could consult freely if they wished. As Paul wrote in 1 Corinthians 15:6, “After that, he appeared to more than five hundred of the brothers and sisters at the same time, most of whom are still living, though some have fallen asleep.”

Did the apostles appeal to blind faith? It seems to me that they appealed to ample eye-witness evidence.