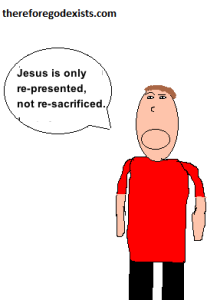 It could be understood that many Protestants probably do not think much differently of Catholic Mass than they would another denomination, and perhaps even a viable option according to ones’ own personal faith, since they do not really understand the practices that they are observing. In fact I might wager that many adherents to Catholicism do not really understand the doctrines that they are practicing. I therefore write this (while appealing to the Catholic authority known as the Council Of Trent) to the end of explaining what Mass is to those who might think that it is just another Christian church. So what is Mass?

I would note that Mass is pretty much the same; everywhere that we find Mass, it is identical, for Catholicism is almost entirely a monolithic religion, which is to say that it is the same, everywhere. 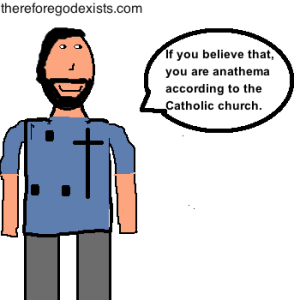 This is in contrast to Protestantism, which separated into denominations (while still loving our brothers and sisters in Christ of other denominations) usually based on secondary doctrinal differences. So this analysis and explanation of what is really going on at Catholic Mass most likely does apply to the local Catholic church.

Having said that, I hope my Catholic readers and sympathizers toward Catholicism do not take this personally nor are they offended, for I am not expressing a condemnation of every Catholic believer, I am merely explaining what practice known as the Catholic Mass. Moreover, I will cite the authority known as the Council of Trent, so that it cannot be said that I have lied or misrepresented their view.

There are a few aspects of the Catholic Mass that I will analyze.

The Sacrifice Of Jesus Christ 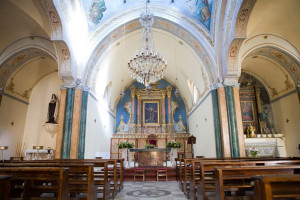 Upon entering a Catholic auditorium, we will often see what is regarded as Holy water, a large, beautiful alter with burning incense, and a Catholic priest in religious garments. These aspects, and many others, are a consequence of the book of Exodus and the Levitical priesthood, as most Catholics will admit. Their tabernacle is consistent with the tabernacle of ancient Israel. But there is one small difference: where is the burnt offering? Where is the sacrifice to the Lord as found in all of the tabernacles of old?

The Catholic Church does not abandon the concept of sacrifice, but rather, they adhere to what they call an unbloody sacrifice, namely, the sacrifice of the Lord, Jesus Christ. The teaching in the Catholic Church is that every time they have Mass, Jesus Christ comes from his throne, and is sacrificed yet again. Many Catholics will use terms such as that the sacrifice is presented for us again, but that is just not consistent with the findings of the Council Of Trent.

Session XXII Canon One: “If anyone says that in the Mass a true and real sacrifice is not offered to God or that to be offered is nothing else than that Christ is given to us to eat, let him be anathema.”

Therefore it seems to me that if the Catholic is to say that this is not an actual sacrifice of Jesus Christ being offered to God, that they are, by the standards of their own religious institution, anathematized (or, condemned). The official stance is that Jesus Christ is literally sacrificed again and again at the alter of the Catholic church.

But as Hebrews 10:12-14 tells us, But when this priest had offered for all time one sacrifice for sins, he sat down at the right hand of God, and since that time he waits for his enemies to be made his footstool. For by one sacrifice he has made perfect forever those who are being made holy.

At the event known as the Lord’s Supper, Jesus Christ told his disciples that the wine which he gave them was his blood, and the bread which he gave them was his body, and that they were to consume these things in remembrance of him. The Catholic interpretation of this passage is that, to be accepted into the New Testament salvation, men have to literally consume the body and blood of Jesus Christ.

They take the position that the bread literally changes from the substance of bread, and into the body of Jesus, and the wine, literally changes from the substance of wine, and into the blood of Jesus. Now, with the advent of modern science, perhaps it is possible to look into the body to see what this person has ingested, whether there literally is the flesh of a human being in the tummy of a Catholic. But they will usually reply that it does not matter, that it is still true even if undetectable.

Well, that seems to me to reduce Christian theology to mythicism, something like the undetectable Hindu Avatars. But I would reconcile this by saying that Jesus was using one of his many spiritual metaphors. In Matthew 3, John the Baptist said that Jesus would come and baptize with fire. Well then, if the idea of metaphors are so ridiculous, why are we not being engulfed in flames? Jesus said that those who drink from him will never thirst. Was he saying that those who drink Holy water, will never go thirsty again?

Obviously not, these are spiritual metaphors; Jesus used them constantly to explain what he was saying, usually a metaphor that was used in the Old Testament. So the same with the Lord’s Supper. Jesus used a spiritual metaphor as a symbol of the fact that we are accepted into the New Testament church by his sacrifice; his body and blood, and we eat the bread and drink the wine as a symbol of that sacrifice.

But this is not a point that Catholicism takes lightly or that we can call secondary, for they literally condemn those who take the view that I just described. The second canon of the Council of Trent in regard to the Eucharist is as follows: “If anyone says that in the sacred and, holy sacrament of the Eucharist the substance of the bread and wine remains conjointly with the body and blood of our Lord Jesus Christ, and denies that wonderful and singular change of the whole substance of the bread into the body and the whole substance of the wine into the blood, the appearances only of bread and wine remaining, which change the Catholic Church most aptly calls transubstantiation, let him be anathema.” 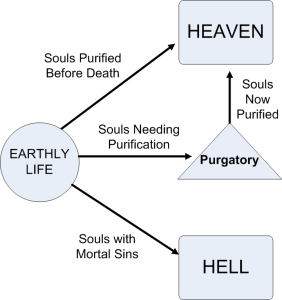 Since justification in the Catholic Church comes by faith and works through grace (which is in contrast with Romans 11 which tells us that there can be no works in grace), part of that justification process is in attending Mass and essentially gaining spiritual points so that they can spend as little in Purgatory as possible. This is why there is a Mass service every morning, so that the Catholics have the opportunity to atone for their sins.

However, outside of this system, there can be no atonement, for in Catholic theology, confessing sins to a Catholic Priest is necessary for justification, and attending Mass is necessary for justification. But to get out of Purgatory in a timely manner, one has to attend a multitude of Masses so that Jesus Christ can be sacrificed for their sins a multitude of times.

To help understand this system, think of the sacrifice of Jesus Christ as being equivalent to that of a goat or a bull, because each time the beasts are sacrificed, they are sufficient to cover the sins that the person has committed since the last sacrifice, and so the same with Jesus Christ in the Catholic system. Every time they go to Mass, the Priest submits their sins to be covered by the unbloody sacrifice of Jesus Christ. But that does nothing to cover the sins of the future, so they will have to come back so that their future sins can be atoned for.

Once again, what I have written here enjoys the support of the Council Of Trent. (Sixth Sesssion, 1547) Canon 30. If anyone says that after the grace of justification has been received the guilt is so remitted and the debt of eternal punishment so blotted out for any repentant sinner, that no debt of temporal punishment remains to be paid, either in this world or in the other, in purgatory, before access can be opened to the kingdom of heaven, anathema.

One Thought to “What Is Mass?”