When the Lord created man, he did so for himself; he wanted to show his glory and express his love, so that they will know that he is God, and that in him, they will live, and move, and have their being. But the people rejected the sovereign Lord and began to create idols; gods constructed in their own image. This is to be expected, because if one is to create their own deity, they are no longer subjected to the strictures of following the Lord. The Egyptians were guilty of this, and so God showed his glory and power through the 10 plagues of Egypt. Yet far from being random, these plagues were slights, and indeed judgments, against the false gods that men had constructed in Egypt.

Considering this, it seems to be the case that God had a double-motive when he freed his people from the clutches of the Egyptians, for if he wanted to, he could have released the Jews in a millisecond, but he wanted to show his power; that he, and not the Egyptian deities, was Yahweh; that his name would be proclaimed in these demonstrations of power (Exodus 9:16). The Lord delayed his release of his people so that he could proclaim his power, to show that his serpent would devour the magicians’ serpents, and that his powers exceeded the powers of their deities.

Moreover he wanted to execute judgment on the Egyptians for their worship of idols, because the men had turned away, even forbidding the Jews to worship in truth, and threatening to stone those who kept the commandments of the Lord (Exodus 8:27). Therefore the Lord sought to show Egypt who he is and that they deserve his wrath, and then he poured it out upon them.

But the Lord is sovereign over all creation; everything that exists on earth, angels and men, demons and devils, have to answer to him. So while God judged the wicked Egyptians, he judged also the gods they kept (Exodus 12:12). Let it be said that God is so powerful and just that he would smite even the deities that the Egyptians kept to demonstrate how worthless and impotent they are when compared against the Almighty.

So he reminds them, through the 10 plagues of Egypt, I AM THE LORD. But what were these plagues that were judgments against the Egyptian deities? 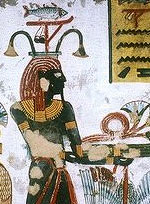 The Nile river was known to the ancient Egyptians as being under the sovereignty of the water god, Hapi. Indeed they regarded Hapi as being the father of the gods because in his absence, they would have no water and would soon perish. Hapi was known as the greatest of the gods, even greater than the sun god known as Ra, for the Egyptians put their trust in him that they would be sustained.

But the Lord, with his finger pointed to the Nile river and called out MINE, and he changed the liquid of the Nile from water to blood, so that the deity who the Egyptians had put their trust in could not sustain them. The Egyptians were forced to dig around the river to find water, and they were put at the whim of the Lord when confronted with the impotence of Hapi.

Yahweh called out to those who worship Hapi, I AM THE LORD.

The annual inundation of the Nile river brought fertility to the barren lands of Egypt and produced a multitude of frogs. This was attributed to the fertility goddess who the Egyptians knew as Heqet; a female figure with the head of a frog. As the fertility godess, it was not only a multitude of frogs that were attributed to her but also every life that comes to be was a gift from Heqet. In fact, as a sort of ancient prenatal vitamin, pregnant women would wear the Amulet of Heqet to protect themselves during pregnancy.

Perhaps it was even by the mercy of one of the followers of Heqet that Moses was spared as a baby. But years later he returned as God’s prophet to execute the fulness of the wrath of the Lord on this deity, and he swarmed them with frogs; in every square foot of every room, in every bed, at every table, there was another frog; the Lord of all, including fertility, did not even need the inundation to bring about this plague of the frogs.

Yahweh called out to those who worship Heqet, I AM THE LORD. 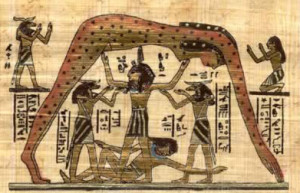 Often portrayed as laying on his side with plants coming forth from him, Geb is known as the god of the earth, or creation, having sovereignty over the dust of the ground, the plants and all of the world. The teaching is nothing on earth that exceeds Geb’s jurisdiction. Being the offspring of the god of air and the god of moisture, Geb was able to inherit a significant birthright, and became the god the earth.

But the Lord used his prophets to change the dust of the earth in Egypt, each little piece of dust, into gnats, and they overcame the people of Egypt, a power that even the Egyptian magicians could not duplicate. For they were forced to concede that the alleged god of the earth, Geb, was powerless, and they said what we find in Exodus 8:19, “this is the finger of God.” Indeed, the earth is his footstool.

Yahweh called out to those who worship Geb, I AM THE LORD. 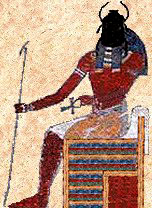 The Egyptians believed that when a beetle emerged, it emerged spontaneously, as if from nothing, and therefore the solar god Khephri was thought to be a self-created insect god. Since the Egyptians also associated the movement of the sun across the sky with the movement of a ball of dung when pushed by a beetle, they rendered him an insect god, typically depicting him as a man with a beetle in place of his head.

As a judgment against Khephri, the Lord plagued the Egyptians with flies; it is written that everywhere they went, in their homes and in every room, in even the ground they walked on was consumed by flies. God showed that there is no authority under the name Kephri, and that he was the sole authority over everything, that none, not even Kephri, can hold back his hand. There is no dominion which God does not inhabitat and rule over.

Yahweh called out to those who worship Kephri, I AM THE LORD. 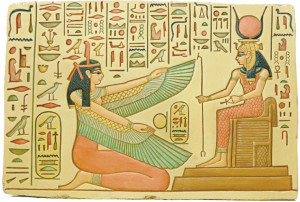 It may be possible to say that there are manifestations of the Egyptian goddess Hathor in contemporary Hindu religion, since she is dated so far back that it is difficult to trace her origins. She has been represented in a variety of ways, such as a goddess of the sun, motherhood, protection, and indeed, even livestock. Hathor was regarded in ancient Egypt as a cow goddess. As such, cows were regarded as sacred by Hathor and her followers.

Having little tolerance for opposing religious ideas, God sent yet another plague upon the Egyptians, namely, death pursued the cows owned by the Egyptians. These animals who were regarded as sacred and holy, God killed, as if to say, You worship created things and not the Creator. In his hatred for idolatry, the Lord demonstrated his power by destroying the idols kept by the Egyptians.

Yahweh called out to those who worship Hathor, I AM THE LORD.

After being bitten by a poisonous snake, the sun god Ra was conned into endowing Isis with the irrevocable power to cure people of their illnesses. Being one of the most popular Pagan deities, there is much else that is attributed to her, but this plague relates closely the capacity to heal that is commonly attributed to Isis.

Therefore the sixth plague that the Lord sent challenged the deity Isis to demonstrate her power and to heal the boils that were on the faces of even her magicians. But again, the ability that the Egyptian’s deity was alleged to have proved to fall short of the glory of the Lord. Indeed the magicians could not even stand before Moses because the boils were so numerous and painful. The plague of the boils swarmed all of the Egyptians, and thus they were left to the mercy of the Lord.

Yahweh called out to those who worship Isis, I AM THE LORD. 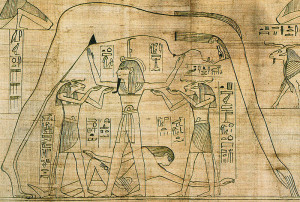 The origin of the goddess Nut is found in the creation account of Heliopolis, and as such, she is one of the oldest goddesses in Pagan mythology. But she was awarded the position as being the goddess of the sky, and the Egyptians worshipped her likewise. She was said to have been in the sky, constantly having sexual intercourse, and that the sun and moon would travel across her body during the day, and at night, they would be swallowed up into her belly.

But as the Lord sternly reminded the Egyptians that the sky declares his glory, and that when lightning strikes, he is the one who chooses the target. Thus the seventh plague was hail; it is written in Exodus 9 that the Egyptians received a hailstorm as never before; God himself uprooted the authority and power of the sky of Nut and declared his majesty.

Yahweh called out to those who worship Nut, I AM THE LORD.

The deity known as Seth was demonized among most Pagan cults for his questioning the authority of Horus, tearing through his mothers’ womb, and in ancient Egypt, all storms, destruction and chaos were attributed to him.

But the eighth plague was thought of as a wave of destruction, with a storm of locusts emerging from the sky eating all of the crops and food that were not destroyed in the hail storms. In this way, the Lord told the Egyptians that it was not Seth who they needed to fear, but his wrath, for he is God over all.

Yahweh called out to those who fear Seth, I AM THE LORD.

Ra was a god of great antiquity, with many different stories and traits attributed to him, so it is difficult to formulate any sort of concrete analysis of him, however, one thing that even the oldest accounts agree upon is the idea that Ra is the god of the sun, the one who brings the light as he drives the sun through his chariot in the heavens.

After attacking every dominion that the Egyptian gods were sovereign over, they must have remained confident in Ra, the god of light, for what has been more constant in life than the light from the sun? God cast his judgment upon Ra when he showed that he was the creator of the heavens and the earth, and that it was he who said “Let there be light.” So he plagued the Egyptians with absolute darkness, left only to see how much their gods could do for them.

Yahweh called out to those who worship Ra, I AM THE LORD.

The ancient Egyptians believed that the Pharaoh himself was a Pagan deity; a man, a ruler, and a god. They maintained that he was the actual manifestation of Ra, so that it was understandable that with such an ego that he would attempt to bargain with and even threaten Moses, after witnessing the nine plagues. He said, “if I see you again, you will die!” In his anger, Ra threatened to bring death upon Moses.

Alas in his righteous justice, God displayed his anger by taking the lives that he gave; killing the first born of all of the Egyptian families, leaving the Pharaoh powerless against his wrath. Therefore, even the firstborn of the Pharoah’s family was subjected to the wrath of God and was killed that very night.

Yahweh called out to those who worship the Pharaoh, I AM THE LORD.