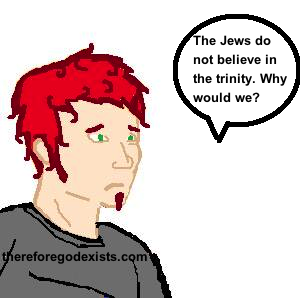 Something interesting that I have encountered is the difference between Jewish and Christian theology. This is interesting because Christianity sprung forth out of Judaism. Christ came from a Jewish background, affirmed that the Old Testament were Scriptures, and provided atonement and revelation to the world. But Christ’s revelation, in many instances, is in contrast with the beliefs of traditional Judaism. Most Jews disagree with many of the fundamental dogmas of Christian belief, not the least of which being the doctrine of the trinity (Note: if you do not know what the trinity is, you should first read my article, Is The Trinity In The Bible? before reading this). Jews typically find the doctrine of the trinity to be abhorrent and offensive. But Christians believe it. So this raises the question: is the trinity in the Old Testament? 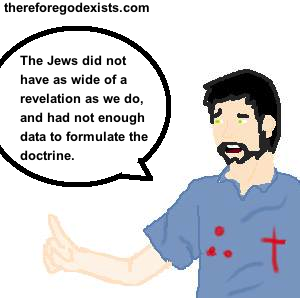 This is not something that Jews should be unfamiliar with, because they believe that for thousands of the years, the word of God was evolving, gaining more and more revelation as time passed. There was a point in the past, where all the Jews had, were the ten commandments. The Jews during the day of Moses or the early Patriarchs did not have as wide of a revelation as the Jews of the day of Isaiah. So the same with Christians and Jews. Jews just do not have as wide of a revelation as Christians do, because they reject the New Testament manuscripts, and they reject Christ.

Plurality In The Godhead

The authors of the Old Testament used plural pronouns and even verbs when referring to God, and this is evident from the very beginning. It is rather remarkable how God used men to do this. Perhaps Moses and the other authors did not even know why he was writing what was we being relayed to him by God. But they just faithfully recorded what God told them. When Moses wrote, in Genesis 1:26, “Let us make mankind in our image…” one wonders if Moses even knew why God inspired him to write, “let us make…” Moses obviously knows that there is one God, since he wrote Deuteronomy 6:4. Despite that, he was commanded by God to write, “let us make…” This is clearly an indication that there is more than one member of the Godhead. The Father is talking to the Son.

With that in mind, the most usual response that Jews give is that God is addressing the angels in this context. The Father is not addressing the Son, but rather, the Father is addressing the angels. But there are a number of problems with this. To tell the angels, “Let us make…” would imply that they were creating alongside God. But the very next verse (Gen 1:27) tells us that God alone created man. This is again confirmed in Isaiah 44:24, which tells us, “This is what the LORD says– your Redeemer, who formed you in the womb: I am the LORD, the Maker of all things, who stretches out the heavens, who spreads out the earth by myself…” Therefore, the angels were not creating alongside God. This is the Father addressing the Son (John 1:2-3).

This is not one isolated example. As the theologian Anthony Rogers pointed out, the trinity is found throughout the entire warp and woof of the Old Testament. Genesis 1:27 is complimented by Genesis 2:18 (LXX), 3:22, 11:7, 20:30; Isaiah 6:8, and 41:21-24, Deuteronomy 4:7, and many more. All of these are examples of God being referred to in plural form. Further, and this is evident in the original Hebrew, the word that is often translated into Lord in the Old Testament, is Elohim. Elohim is the plural form of the word El. It is, again, an indicator of the three persons found within the Godhead.

There are many instances in the Old Testament in which Jesus appears to men to speak on behalf of the invisible God. In each case, Jesus Christ appears to men, and it is made clear that he is God. However, in each case, it is also clear that there is a distinction between the Father and the Son.

In Genesis 18, it is said that three visitors appeared to Abraham, one of these visitors is the Lord. Therefore, God appeared to Abraham as a man, and therefore, Jesus Christ appeared to Abraham. Being referred to as Lord (with the same respect that God is given), Jesus tells Abraham that he will go down to Sodom and Gomorrah to see if they have sinned. But in doing so, Jesus is declaring that he is not omniscient. He does not know everything. He has to go into the city to see for himself if it is true. Therefore, Jesus is God the Son; the human version of the invisible God (Colossians 1:15). But that is precisely what trinitarian theology teaches.

This phenomenon occurs multiple times. Jesus encounters Jacob in Genesis 32, and wrestles with him, showing that he is not all-powerful. Despite that, he is called God (Genesis 32:30). In Joshua 5, a character known as the Captain Of The Lords Armies appears to Joshua, and Joshua worships him without being rebuked. So in each case when Jesus appears in the Old Testament, he is regarded as God, despite that God the Father is not a human being (Numbers 32:19). Therefore, we see at least two of the members of the Godhead in the Old Testament – God the Son, and God the Father. Therefore, the trinity is in the Old Testament.

God Has A Son

The Old Testament makes it clear that God the Father has a Son. Psalms 2:7 says, “I will proclaim the LORD’s decree: He said to me, ‘You are my son; today I have become your father.'” I think we can all safely assume that God is not his own Father, and that he has not begotten himself. Therefore it follows that God’s Son is a person distinct from him, known to his followers, of course, as Jesus Christ.

This occurs again in Proverbs 30:4b, in which it says, “Who has established the ends of the earth? What is his name, and what is his sons name? Surely you know!” For somebody to be a son directly indicates that they have a Father. We can assume that he is not his own father, nor is he his own son. Therefore, there is a distinction between God the Son and God the Father.

So, is the trinity in the Old Testament? From these three lines of evidence, we can establish the following: there is more than one member of the Godhead, who created the world and inspired the prophets; two of the members of the Godhead are God the Father and God the Son; there is a distinction of persons between God the Father and God the Son. Therefore, the trinity is in the Old Testament.