Many of my followers are aware that I have come from a Oneness Pentecostal background, and I often make harsh comparisons, in saying that they are similar to the Mormon church or the Jehovah’s Witnesses. Of course I went into this thoroughly in my subsection Oneness Pentecostal Heresy but I think it would be profitable to briefly lay out 5 problems with Oneness Pentecostal doctrines. I should also note that not all who claim to be Oneness Pentecostals believe all of these things. Many members of the UPCI do not even realize what the larger organization believes.

1 – Whose Wrath Went Out Upon Jesus? 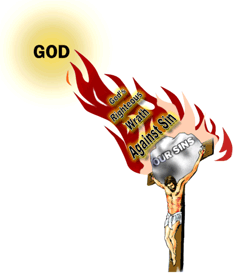 The most terrifying truth in all of Scripture is that God is good. This is terrifying because while God is good, we are not. So what does he do with us? His wrath abides upon us, he must give us just condemnation for our sins. But Christ stepped in and paid our fine when he was murdered. All of the wrath of God that we deserve went out upon him. The main problem is the Oneness Pentecostal doctrine implicitly denies this absolutely fundamental truth.

Oneness Pentecostalism teaches what is known as modalism. This means that the Father, the Son, and the Holy Spirit, rather than being three distinct persons, are just manifestations of one person, in the same way that a man can be a father, a son, and an employee. If that is the case, that means that Jesus is both the Father, and the Son. But this raises the question, whose wrath was satisfied on the cross? Who poured out his wrath upon Jesus? We are left to say that nobody’s wrath was poured out, because the Father was the one who was dying. Despite that, the Bible teaches that it pleased the Lord to crush Jesus (Isaiah 53:10), and that Jesus entrusted his Spirit to the Father (Luke 23:46).

2 – They teach people that they are saved when they are not.

The mark of salvation in Oneness Pentecostalism is not bringing forth good fruit (Galatians 5:22-23), it is not repentance (Mark 1:15), and it is not throwing yourself on the mercy of God (Acts 16:31). It is tongues. When one speaks in tongues, then we can say that they are born again. This is precisely what happens to many people. They go to a Oneness Pentecostal Church, have no repentance in their heart, do not know anything about Christ or the Bible. But despite that, they are surrounded by members of the congregation and told “talk like me! talk like me!” Once they do, they are declared to be saved. What is this? This seems to me to be more peer pressure than the work of the Holy Spirit.

3 – They condemn anybody who does not speak in angelic tongues.

It can be credited to Oneness Pentecostal theology that they teach that before you can be saved, you must be born again by the regenerating work of the Holy Spirit. You must be indwelled by God himself and have a born again experience. The problem is that they attempt to tie angelic tongues, necessarily, with salvation. When somebody is born again, they must speak in angelic tongues. If they do not do that, then they are not really born again and do not really have the indwelling of the Holy Spirit. They believe that if you are saved, you must speak in gibberish tongues.

The problem with this is that it is just completely unbiblical. There is absolutely no place in Scripture that says that everybody who has the Holy Spirit will speak in tongues. There is no place at all. It is just a traditional doctrine. Yes, people do speak in tongues (which are probably foreign human languages) in the book of Acts. But they never, even once, indicate that everybody must do this. In fact, twice in the book of Acts, people are filled with the Spirit without speaking in tongues (4:13,8:17). Also, Paul indicates that while he wishes everybody could speak in tongues, they cannot, and he would prefer that they prophecy (1 Corinthians 14:4-5).

4 – They condemn other denominations for their baptismal formula.

Oneness Pentecostalism teaches that when you are water baptized, the baptizer must recite the words ‘in the name of Jesus.’ If he does not recite those words, the baptism is illegitimate, and you cannot be saved. If the baptizer says anything other than the formula, ‘in the name of Jesus,’ you cannot be saved. They think that the words that you recite over the baptismal tank make or break salvation.

5 – They think that we are still in the apostolic age. 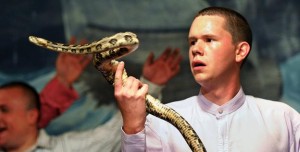 The apostolic age is the time between the death of the Jesus and the death of the last apostle. It was a time in which Jesus promised that the Father would answer all of their prayers for the growth of the church (John 14:13-14), people would instantaneously learn other human languages so that non-believers would be convinced (1 Corinthians 14:22), people would be able to handle snakes and drink poison (Mark 16:17-18), and perform many miraculous signs. This is how the early church sprang out of an obscure village in the middle east on the backs of 11 peasants. God made provisions just for the early church, and when the last apostle (John) died, the apostolic age ended.