Some atheist laymen regard Richard Dawkins as a very sophisticated thinker and a very good apologist for atheism. In fact many will say that Dawkins’ body of work persuaded them to cross over from being backslidden into outright atheism. Despite the high regard in which laymen hold him, academics tend to view him as a joke figure, shaking his fists at sky fairies. That is why the philosopher, Doctor Alvin Plantinga said, “Dawkins’ forays into philosophy are at best sophomoric. But that would be unfair to sophomores.” I think there are at least 5 mistakes Richard Dawkins has made. 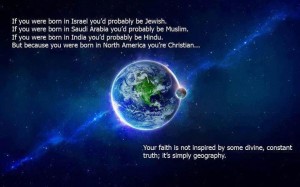 Dawkins admitted that when he was a boy, he was stricken with doubt about his faith because of the fact that people from other countries believe just as strongly as he does, about different things. Today he attempts to represent this as an argument against religious belief. He will say, “if you had been born in India, you would be worshipping Vishnu.”

Now this one-liner seems to me to be something like saying, “if you had been born in China, you would be a communist,” or “if you had been born in the former Soviet Union, you would be an atheist.” But so what? How one comes to know their beliefs says absolutely nothing about whether their beliefs are true. I could learn in a comic book that the earth is round. While the comic book may not be a good way of coming to know truth, nevertheless, my belief about the earth being round is valid. Dawkins commits a textbook example of what is known as the Genetic Fallacy. He attempts to show how a belief originates, and thereby prove the belief to be false.

2 – His criticism of the ontological argument.

The ontological argument moves from the possibility of God’s existence, into God’s existing in a possible world, and finally, in an actual world. I explained this argument here. Dawkins said that he went to a convention filled with theologians and philosophers, and in front of them, attempted to refute the argument by talking about a maximally great flying pig.

Now, as Doctor William Lane Craig pointed out, this is just embarrassing. I wonder what a spectacle Dawkins must have made of himself at this conference of theologians and philosophers. Further, Dawkins writes, “They resorted to modal logic to refute what I was saying.” Which seems to me to be like saying, “they refuted what I was saying.” After all, the ontological argument is an exercise in modal logic. So it is almost as though Richard Dawkins just has no idea what he is talking about.

3 – His criticism of the kalam cosmological argument. 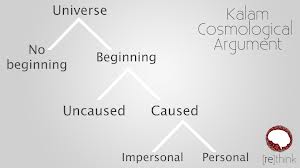 The Kalam Cosmological argument states that everything that begins to exist has a cause, and the universe began to exist, therefore concluding that the universe has a cause. From here, we just unpack what it means to be the cause of the universe. I explained this argument here.

4 – His thoughts on complexity.

Dawkins thinks that God is an enormously complex entity, and as such, would not be an advance in knowledge. We cannot posit God as an explanation, because God is even more complex than that which he is being invoked to explain. This is part of the central argument of Richard Dawkins’ book The God Delusion. Of course, simplicity is one of the principles by which we measure a scientific hypothesis, so in that respect, he is right.

5 – Who designed the designer? 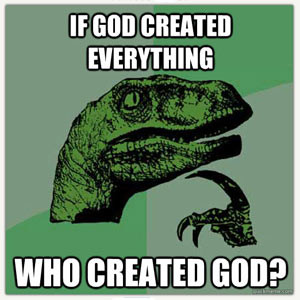 Richard Dawkins thinks that we cannot use God as an explanation for the universe, because a new problem immediately arises, namely, who created God? This question has been championed by many atheists, often calling it, “the question that no theist can answer.” Dawkins holds a self-congratulatory attitude as well, often telling people that “this is a very serious argument, to which no theologian has been able to come up with a convincing answer.”