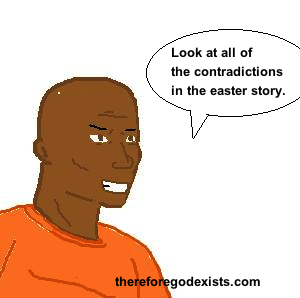 Dan Barker issued the Easter Challenge a few years ago as an indicator of the demerits of the Christians’ Easter tradition. While we use it to commemorate that Christ had risen from the dead, there are serious flaws in the Easter story that many Christians do not realize. This aligns with what is known as the Synoptic Problem. The Synoptic Problem points out the contradictions between Matthew, Mark and Luke. Since they overlap in the events that they record, a good Christian will assume also that they overlap precisely in the accounting of every detail. But they do not. Likewise, the Easter Challenge points out that there are contradictions in the events that the Easter story records. 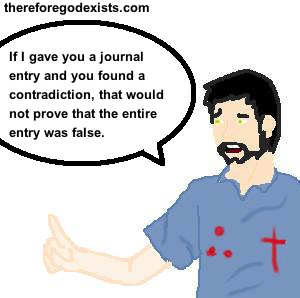 So Barker, and other atheists, pose this challenge to Christians. We are to look through the gospels and answer the following questions about the Easter story. What did the women visit the tomb? Who were the women? What was their purpose? Was the tomb open when they arrived? Who was at the tomb when they arrived? Where were the messengers situations? Et cetera. Since the answer is different in each gospel, Barker argues, we have contradictions in the Bible. So the question presses hard upon us: how is it that we can reconcile the Easter Challenge with our faith?

We are asking the wrong questions. This entire discussion presupposes that if the Bible is the word of God, then there would be no errors at all. Both the atheist and the Christian are making this assumption and arguing on that foundation. What good reasons are there to think that? Perhaps God allowed his people to tell the story as they recounted it, even if some of the details were different or even contradictory. A tenable theory of inspiration does not demand inerrancy. There could be errors. If there are, it should not bother Christians. We should not take the position that the entire faith will collapse if one mistake is found in the Bible. 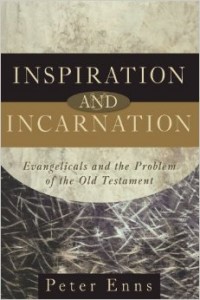 It would be a mistake for us to forget the human element of the Bible. It would be a mistake for us to think that biblical inspiration is akin to qur’anic inspiration. In Islamic theology, the Qur’an is literally dictated from Heaven. Muhammad was a passive recipient of what God had to say. As such, there can be no errors. But the Bible is different. The Bible is a very human book that was sometimes influenced by culture and even subject to human blunder. That is not to say that it is not inspired of God. It is to say that our conception of inspiration seems like it is a consequence of a modern way of thinking.

In his book Inspiration and Incarnation, Doctor Peter Enns compared the doctrine of inspiration to the incarnation of Jesus. Jesus is both fully God and man. There is an ancient heresy known as docetism that says that Jesus is God, but only had the appearance of a man. He did not die, but only appeared to die. Likewise, argues Enns, would be for us to remove the human element from the Bible. The Bible is God’s word, but he used men, and men make mistakes.

If Mark says that there is one angel at the tomb, and Matthew says that there are two angels at the tomb, I would just point out that two presupposes one. Perhaps Matthew’s source saw two angels and Mark’s source saw one angel. Two presupposes one. If this sounds contrived, let me remind you of what a contradiction is. A contradiction is when these two facts are irreconcilable. If they are reconcilable, then it is not a contradiction. That is not to say that it is not contrived. It is just to say that these two events can be reconciled. That is also not to say that all of the alleged contradictory events are like this. Some are more challenging than two-or-one angels. But it is to say that some of these claims might not have underwent the scrutiny of critical thinking.

In fact, the only time that we do see the same story with the same details is either in an incredible coincidence or when the authors are collaborating. If the authors are collaborating, getting together to talk about the story, then the details would align precisely. But since they are different, this seems like an argument against the reasoning that says that the disciples made it up (of course, this would presuppose that the disciples wrote the gospels. This argument would dissolve if it could be shown that people who were incapable of collaborating wrote the gospels. But that is another topic and another debate.)

The Easter Challenge. My main objection to the Easter Challenge is that it sets up a standard that the Bible does not have to reach. It makes the assumption that the Bible cannot differ in background details, and lodges an argument on the basis of that assumption. But I just do not see any compelling reasons to think that this assumption is true. Further, many of the contradictions are just different details, which can serve as an argument against collaboration. I think that the Easter Challenge is a little misguided. However, I do understand that this attack is directly related to fundamentalism. The fundamentalist will declare that there can be no contradictions, and that if you cannot trust one line, then you cannot trust any of it. Of course, that sort of reasoning would refute the ability to trust any document that contains a single error. My fundamentalist brethren have so thoroughly defended the Bible that they have rendered it indefensible on some fronts.