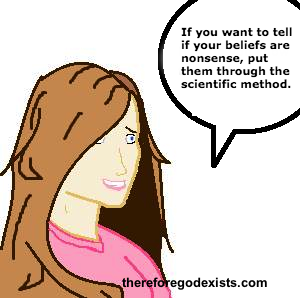 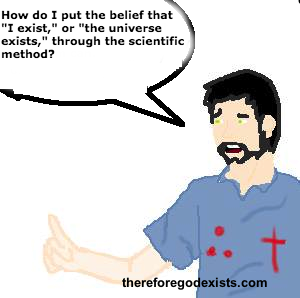 One can understand why secularists will want to count the scientific method as one of their resources. This process has hoisted mankind into the era of technology and contributed to the flourishing of western culture. It has advanced our knowledge about the universe. Scientists can create models of reality and predict some actual feature of the universe almost a prior. One of the best examples of this will be the Higgs boson. Science has even been the ally of the Christian apologist, finally providing concrete evidence for Genesis 1:1. The scientific method should not be thought of as an enemy to the faith. It complements it. Yet there are skeptics who overextend the scientific method.

The Scientific Method Vs Empiricism

The scientific method is a system of inquiry. Accordingly, it can be used within certain limitations to establish some truths. However, in the linked video above, titled How To Tell If What You Believe Is [Nonsense], the speaker treats the scientific method as though it were equivalent to empiricism. He suggests that you can take “what you believe” and put it through the scientific method, thereby verifying or falsifying your beliefs. Whether he knows it or not, what he is advocating is known as empiricism, and it is a few steps beyond the function of the scientific method.

Based on these three arguments (and others), we can conclude that empiricism is false and that it is possible to believe that some things are true without putting them through the scrutiny of the scientific method. One cannot tell if what they believe is [nonsense] simply by appealing to the scientific method.

Evidence is only as valuable as the ability of the person who is interpreting it. That is one reason that it is a mistake for people to esteem scientists too highly. They often draw conclusions that exceed the evidence. For example, when Neil deGrasse Tyson uses his expertise as a scientist and his knowledge of how the universe began to conclude that “we do not need God,” he is speaking out of turn. The evidence can only tell you how to the universe began, and to conclude that you do not need God is to stretch the evidence further than it will go.

What About Non-Evidential Claims?

Further, for us to say that one can discern whether her beliefs are [nonsense] based solely on whether it passes through the scientific method unscathed, that will be absolutely destructive to basic epistemology. Even the most fundamental belief, namely, “I think, therefore I am,” is not an evidential belief. It is axiomatic. There can be no evidence for the proposition that I exist. Yet I know that I exist because even when I doubt that I exist, there must be a conscious mind here to do the doubting. This would be a distinction between reasons and evidence.

Similarly, even if we ignore the problem of our own existence, we would still have to ask the further question of where we exist. Is the universe that we perceive really real? The proposition that “the universe is real” cannot be processed through the scientific method, because the scientific method occurs in the very universe that you are testing. Basic beliefs regarding one’s own existence and the existence of the external world will fall into the category of non-evidential beliefs. It is rational to hold them even without any evidence. In fact, it would be literally insane to believe that you do not exist.

Can God Be Put Under The Microscope?

As a classical apologist, I do believe that there are theological claims that can be supported or contested with scientific evidence. However, that is not to say that theological claims are scientific claims in and of themselves. The proposition that God exists could be true even if there were no evidence. As the atheist philosopher, Dr. Kai Neilson pointed out, “Even if the proofs of God fail, it may still be the case that God exists.” God therefore cannot be put through the scrutiny of the scientific method. That is not to say that there is no evidence for God, but only that one does not need evidence to believe in God.

The Evidence Will Not Be Enough

Yet religious claims go a little beyond the existence of God. We maintain that all are under sin (Romans 3:23), without hope of life beyond the grave. Only through Christ is the problem of sin solved. When he was murdered, he absorbed God’s wrath, dying in our place (Romans 3:21-25) and three days later, he rose from the dead. Now, his death is our death and his resurrection is our resurrection. This is the centerpiece of the Christian faith.

Yet even if I provide the evidence for the resurrection, it will not be enough. People deny the gospel not because of the evidence but because of the practical implications in their lives. If the gospel is true, they will have to lay their lives down, surrendering their will to the will of God. These implications are enough to prevent anybody from believing. That is why Paul said that the gospel is foolishness to the world and the power of God to believers (1st Corinthians 1:18).

What we believe is not something that can be put through the scientific method. Even if the evidence works, the natural man will never believe it. He is biased, naturally inclined to reject it because accepting it will mean surrendering his autonomy. Faith comes only as a gift from God (Ephesians 2:8-10) and while it does make some evidential claims, the natural man will always reject what the scientific method yields about them.

The greatest philosophers in history were competent scientists. Philosophy and theology are the great unifiers of the distinct fields of study. That is why schools of higher education are called universities. There is unity in diverse disciplines. To emphasize natural sciences too much will lead to several critical errors. In summary, some of those errors that we have covered are:

Recommended Reading:
Do Our Experiences of God Give Us Reasons To Believe In Him?
CS Lewis, Cosmic Fake News And Atheistic Naturalism
The Evidence For God series
Did Jesus Rise From The Dead?