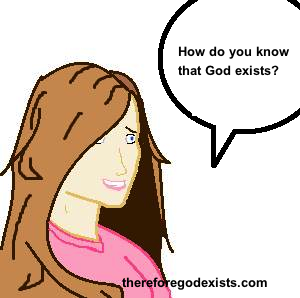 It is often difficult for people to articulate why they believe in the existence of God. This may not be because they are stupid or uneducated, but rather that they have never thought about it from that angle. So they as they ponder this question, they may reveal answer that are either inadequate, or they are unable to defend. They believe in God because of the Bible, or because of the risen Savior, or because of the abundance of the natural world, or because of their relationship with Christ. These are all good answers for why a person believes in the existence of God. But people often find that they are just unable to defend the thesis that God exists upon rigorous scrutiny, and this is just because they have never had the need to engage in any form of apologetics. So when atheists think that they are intellectual elitists, asking trivial questions, like Who Created God? the good Christian might not know how to answer these questions. But what they do know is that they have a relationship with Christ. Does this relationship give them reason to believe? Do our experiences of God give us reason to believe in him? 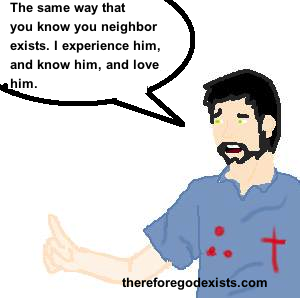 You have been born again. Those who truly know Christ have been born again. They were spiritually dead, lost in their sins and enemies of God. They hated righteousness. Any time they tried to do righteousness, it was always as though they were locking themselves in a legalistic cage. That is why when somebody who is not born again tries to live a Christian life, they grow to hate it, and they develop a deep hatred for God and all of his restrictions, because that is all they are to the unregenerate. They are arbitrary restrictions. Hence, the one who is not born again will leave the Christian faith and have a sense of freedom. 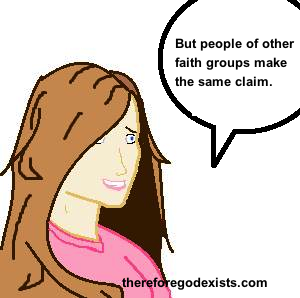 Thus for someone to believe in Christ, for someone to give their life to him is a miracle. For someone to have their heart of flesh replaced with a heart of stone is a miracle. Such a person does not hate righteousness, but rather they love to do the will of their Father, and labor with joy for him and for his glory. They have been born again. They have seen the changes that God has wrought in their heart and they know that such a thing could never happen by the power of the flesh. They interact with God daily, and know his presence and recognize him. They hear the voice of the Son of God and they follow him. 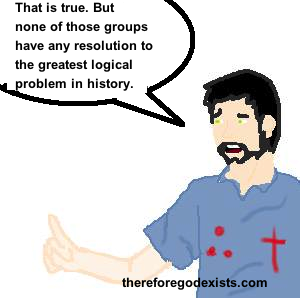 In this way, their relationship with Christ is akin to a relationship with another person. Do our experiences of God give us reason to believe in him? Well that seems like asking if our experiences of our neighbor give us reason to believe that we really have a neighbor. Of course it does. The Christian can stand firmly in their knowledge of him because they know him, and he knows them.

So in the same way, the atheist might point out the possibility that we are just hallucinating God. But I am not sure if that is a proper approach for us to take in reality. If you are going to say that I am hallucinating something, then there had better be a really good reason for it. You had better be able to provide some evidence to substantiate the claim that I am hallucinating. In other words, you will need to provide evidence that God does not exist, if I am going to believe that I am hallucinating. If you are unable to do that, then the default position is to trust what I see plainly. It is a properly basic belief in this way. Do our experiences of God give us reasons to believe in him? We do not question the existence of that which we can see plainly in the absence of evidence.

What about other faith groups who see things plainly? The existence of somebody who sees something plainly that is not really there does not undermine belief in the external world, or people or cars or plants or food. I can believe that I am eating a turkey sandwich, even if the person across the table thinks that they are praying to a religious figure that I do not believe in. There is nothing there to compromises that properly basic belief. In fact, as I said, in the absence of a defeater, we can probably say that they are justified (at least from a logical angle) in that belief.

However, I would suggest that in the case of the world religions aside from Christianity, there are overriding defeaters. They hold to a conception of God that is not maximally great, though many of them claim to be. Many of the world religions believe that God does not punish sin. A God who does not punish sin is like a court judge who lets a guilty criminal walk out of the courtroom a free man. He is a corrupt and immoral judge. If God is maximally great, then he is good, and righteous, and holy, and so he must punish sin. He must do justice. The world religions labor to solve this problem, and tend to either deny that evil exists, or put man into a legalistic cage, and suggest that he must earn his favor with God. He must do good works to wipe away the bad ones. But upon that model, God is still not righteous. He is still overlooking the sin that man commits, and letting him walk free. But if a guilty criminal standing before a court judge were to say that he has committed more good deeds than evil deeds, he would still be found guilty, because the evil that he committed deserves to be punished. Hence, the world religions are found lacking, because they do not solve this logical quagmire.

This is one of the greatest logical problems in all of history. It is the problem that all of the world religions have tried to answer. God provided an answer for us in Romans 3:23-26. “All have sinned and fall short of the glory of God, being justified as a gift by His grace through the redemption which is in Christ Jesus; whom God displayed publicly as a propitiation in His blood through faith. This was to demonstrate His righteousness, because in the forbearance of God He passed over the sins previously committed; for the demonstration, I say, of His righteousness at the present time, so that He would be just and the justifier of the one who has faith in Jesus.” Christ died in our place, as our substitute. He paid for our sins. He absorbed the wrath of God in full on the cross, and then he rose from the dead, in vindication and glory.

What about unfalsifiable beliefs? If somebody holds to a belief in the almighty square circle (as most of the world religions do), then we would point out that there is an overriding defeater of their experiences of the almighty square circle, namely that a square has four corners and a circle does not have any. This conception of religion is mostly to what I am referring when I am speaking about overriding defeaters.

But suppose a person has a belief that is both irrational and unfalsifiable. Something for which there just is no overriding defeater. A person is claiming to have a conversation with an invisible unicorn. If I try to touch, it moves away and I cannot feel it. I inquire as to why I cannot hear it or detect it in any way, and the person has a reason. There is no overriding defeater of this belief. Does that make it reasonable? I do not think so.

For someone to believe in an invisible unicorn that is totally undetectable by the outside world is absolutely unprecedented. It is not something that even Christians propose. Our testimony is, “seek, and you will find. If you draw near to God, he will draw near to you.” Salvation is a free gift offered to all men, everywhere. It is also something that many people experience. It has a precedent. Billions of people alive today and throughout the world claim to experience God. In contrast, there are probably 0, or 1, or 2 people who see and interact with undetectable unicorns. Thus it is just not something for us to take seriously.

Is this a blind belief in something that we do not know or understand? I am not advocating that sort of belief. You are reading from a website called thereforegodexists.com. I believe in apologetics. I believe in evidence. I think there is good evidence that God exists in the natural world, in science, and in history. But even if the Christian has no access to these disciplines, they still have reason to believe that God exists, on the basis of their personal experiences of him.

But that is not a blind belief. When I say a blind belief, I mean something that we believe in despite that we have no reasons to believe. But our experiences of a person are reasons to believe. I have no evidence that I am not hallucinating my neighbor. It is strictly an unprovable assumption. But I still know that he exists on the basis of my experience of him, and it would be unreasonable to deny it. In the same way, we know that God exists on the basis of our experiences of him. That is not a blind faith any more than belief in my neighbor is a blind faith. Do our experiences of God give us reason to believe in him? Yes, they do, and this belief is warranted, and not blind.