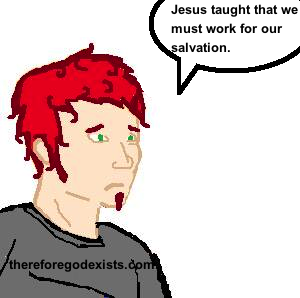 The person of Christ is often smeared by the non-believer (whether intentionally or not) to put salvation by works in his mouth. Some will suggest that while Paul taught that salvation comes by faith alone apart from the works of the Law, he departed from the teachings of Jesus. Paul said that “To the one who does not work, but believe in him who justifies the ungodly, his faith is credited as righteousness.” (Romans 4:5). This would be in contrast with Jesus, so the argument goes. Jesus maintained salvation by accordance to the Torah and to the righteousness revealed therein. In this way, one would be saved by works and by their righteousness, rather than by faith. But what did Jesus teach? Did Jesus teach salvation by faith alone? 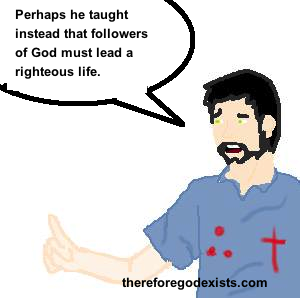 It is important to point out that this is not a denial of the letters of Paul. Paul’s letters were Scripture. Rather, this is an answer to the question that the unbelievers will pose as they labor to pit Paul’s letters against what Jesus said. Further, some people who claim to align themselves with historic Christianity think that both Paul and Jesus taught that salvation comes by works, and they will appeal to Jesus quite frequently, since he had a lot to say about living a righteous lifestyle. But the question is not whether he wanted us to live a righteous lifestyle. Rather, the question is whether that righteous lifestyle would merit our salvation. 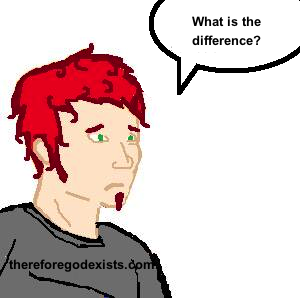 It is finished. In John 19:30, Jesus cried out, “it is finished,” and then he died. Most people believe that Jesus was saying that the debt for sin had been paid. He made a sacrifice on our behalf, because God could never forgive guilty sinners. It is like if a judge had a guilty criminal in a courtroom. He could not just let him go, lest he be a corrupt and an immoral judge. Since God is not corrupt or immoral, a debt must be paid. He must do justice. He must pour out his wrath. When Christ died, all of the wrath that we deserve was poured out on him. He paid our fine. He died in our place, as a propitiation for our sins (1 John 2:2, 4:10). That is the theology of John, and these are the words that we see Jesus saying in John’s gospel. Jesus died with the declaration that the debt for sins had been paid. Then he rose from the dead, proving that he was who he claimed to be. 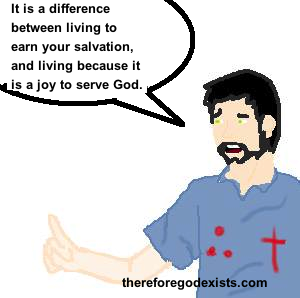 If the debt for sin had been paid, if Jesus did die for the sins of the world, then there is nothing more that needs to be done to add to that sacrifice. Jesus already paid our fine. For the person to try to earn their salvation is an utter rejection of the payment that Christ already made. Christ did the work for us on the cross. He already died the death that we deserve. He already took away the sins of his people. He did that precisely because we could never do it ourselves. Did Jesus teach salvation by faith alone? Of course he did. He taught that his work on the cross was the end of the atonement to be made for sins. 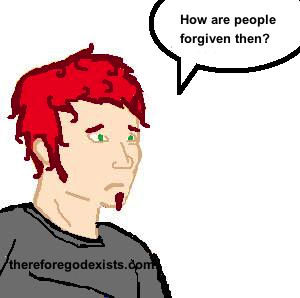 His sheep hear his voice. When Jesus calls, his sheep hear his voice. Those who have been predetermined as God’s elect will come to him. But there is no way for somebody to become righteous enough to be God’s elect. It is determined solely by the sovereign decree of God. This decree determines the distinction between the sheep and the goats. The sheep are God’s elect people. They follow him, and he knows them. Those who believe in Christ hold that disposition because they are God’s sheep. Those who do not believe in Christ hold that disposition because they are not God’s sheep. To that effect, Jesus says, “But you do not believe me, because you are not my sheep.” (John 10:26). The reason that they do not believe him is precisely that they are not his sheep. 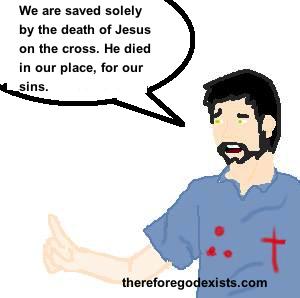 Those who are his sheep hear his voice (John 10:27), and they follow him upon hearing his voice. In this way, salvation is provided to those who answer the voice of the Son of God. Those who answer his call are his sheep, and they are given eternal life. The causal determinant of their following Jesus is that they are his sheep. He gives them eternal life. They do not earn it, because the only reason that they are following him in the first place is that he called them and preserved them, as the text says, “I give them eternal life, and they will never perish, and no one will snatch them out of my hand.” (John 10:28).

The reason that the Son possesses the sheep is that the Father gave them over to him. He says, “My Father, who has given them to me, is greater than all,” (John 10:29). The Father sovereignly decreed who the sheep were and handed them over to the Son. Did Jesus teach salvation by faith alone? He taught that one is saved solely by the sovereign decree and choosing of God. Thus, it is impossible for a person to work for or earn that salvation.

It is impossible to keep the commandments. A rich man approached Jesus and asked how it is that he could attain eternal life. But the way that he phrased his question triggered a very interesting response. He asked, “Good Teacher, what shall I do to inherit eternal life?” (Mark 10:17). Jesus replied, “Why do you call me good? No one is good except God alone.” (Now I will say that I do not think that Jesus was claiming to be a bad guy, and I did expound upon the Christological implications of this statement in my article Is Jesus God In The Gospel of Mark?)

Jesus called this man to consider the words that he used. He told him that nobody was good. If nobody is good, then nobody can merit eternal life with God. Then he listed the commandments. Perhaps this can be taken as a challenge to this man. Have you met this standard of righteousness and holiness? Do not murder, do not steal, do not commit adultery, do not lie, do not defraud, honor your father and mother (v. 19). This man claimed righteousness. He claimed to be precisely what Jesus just said that no man is. He claimed to be good (v. 20). But Jesus knew that he was lying, or deceiving himself. So he said that he still lacks perfection and told him to sell all of his possessions and give the money to the poor. He said this to show the man that he was unrighteous. He said this to expose sin to this man so that sin might become exceedingly sinful. This man wanted to know how to earn eternal life. Jesus told him that he must keep all of the commandments, be perfectly righteous, every day, from the time he is born, until the time he dies. He must never sin.

After the man left, Jesus declared to the people, “How hard it is to enter the kingdom of God! It is easier for a camel to go through the eye of a needle than for a rich man to enter the kingdom of God.” (v. 24-25). This astonished the disciples, because they viewed the rich as people who were blessed of God. If they cannot be saved, who can? If it is that hard to be saved, “Who, then, can be saved?” (v. 26). Who can be saved if you have to live in absolute perfection for all of your days? Who can be saved if it is harder than pushing a camel through the eye of a needle? Who can be saved? Jesus answers them, “With people it is impossible. But not with God. All things are possible with God.” (v. 27). Did Jesus teach salvation by faith alone? He taught that the only way that a person can be saved is by trusting in God for their salvation, and not in themselves. So, yes.

Your faith has saved you. Luke 7:36 records that the professors of theology invited Jesus to come and dine with them, perhaps so that they might challenge him, or get to know his doctrine and understanding. As Jesus was in the professor’s house, an immoral woman approached and anointed him and kissed his feet. Offended, the professor thought that if Jesus really were a prophet, he would know that this woman was an immoral woman (v. 39).

Knowing what he was thinking, Jesus turned to his disciple Simon and told him the parable of the two debtors. One man owes a large debt, the other a small debt. The man to whom both were indebted decided that he would forgive their debt. Of this, Jesus posed the question to Simon, “which of them will love the moneylender more?” and Simon answered obviously that the man who has the larger debt will love him more.

In this way, the woman who had sinned so much was forgiven of her sins, and that was why she loved Jesus so much. Jesus forgave her sins. Jesus was like the moneylender, and she was the debtor, and Jesus forgave her sins. Her forgave her sins on the basis of her faith. Did Jesus teach salvation by faith alone? He said to the woman, “Your faith has saved you, go in peace.” (v. 50). Jesus knew that she had saving faith because of the love that she showed (v. 47). So Jesus did not think that works saved her. Rather, works were a demonstration of her faith. She loved much because she had been forgiven. As a result of the forgiveness that she received, she had love.

He offered people salvation immediately. Upon a model of works-righteousness, one is saved only after they achieve a measure of righteousness. They labor vigorously until they reach a point where they are holy enough for God to allow them into their presence. Thus, for somebody to be saved in an instant would be unthinkable. Nobody can be saved in an instant. Salvation is a process that takes a long time and a lot of hard work.

We see this again in the thief on the cross (Luke 23:32-43). Jesus is nailed to a cross between two thieves, and one of them begins to repent of his sins. Of course, there are no good works that he can do. It is strictly internal. He changes his mind about his sin. He changes his mind about Christ. He changes his mind about God. He saw the mercy of Jesus. He saw that Jesus prayed for the very men who were persecuting him. So he cried out to the other thief, “And we indeed are suffering justly, for we are receiving what we deserve for our deeds; but this man has done nothing wrong.” (v. 41). Then he pleaded with Jesus, “When you come into your kingdom, remember me!” (v. 42) He knew that there was nothing good in himself that could bring him to that kingdom. He knew that he was dead in his sins, worthy only of condemnation. He asks only that Jesus remember him. But Jesus replied, “Truly I say to you, today you shall be with Me in Paradise.”

Did Jesus teach salvation by faith alone? He offers mercy, freely, to the greatest of sinners. He tells them that today they are being offered eternal life. As unbelievers, as enemies of God, they are offered new life. They are born again, made new creatures, and repent of their sins. They are transformed instantly from a state of condemnation to a state of justification. Praise Christ for offering us this salvation that we could never earn.