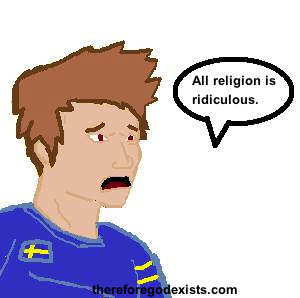 Often when a secular minded person describes religion, or thinks about religion, it becomes evident that they have created a caricature in their mind. They conceive of religion in a way that those who believe in it would not. Then when they share their sentiments with those who are religion, their bias and lack of critical thinking will emerge. People do not care to be engaged with sophisticated philosophy of religion, instead, they only conceive of it in a way that best suits them. They only criticize their caricature of religion. They want to religion to appear to be ridiculous, so that they will not have to think about these things. So then, is religion ridiculous? 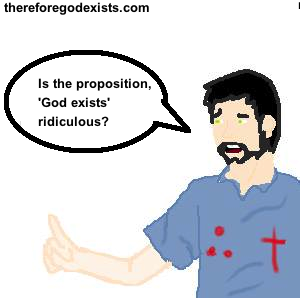 What is religion? Is religion ridiculous? I think religion can be defined by two essential propositions, neither of which are ridiculous. 1 – God exists. 2 – God has revealed himself to men.

1 – The proposition: God exists. Now a person can disagree with this proposition, and still recognize that there is nothing ridiculous about it. When it is said that God exists, it means that there is a being who created all matter, energy, space, and time. In fact, some people think that this is just self-evidently true. There is a creation, and therefore, there must be a Creator. In fact, we could probably say that the negation of God’s existence is more ridiculous, for it would mean that the entire known universe just popped into being, uncaused, out of nothing, with incredible order, and extreme fine-tuning. In the words of CS Lewis, “No philosophical theory which I have yet come across is a radical improvement on the words of Genesis, that ‘In the beginning God made Heaven and Earth.”

The Equadistant Letter Sequencing method of finding prophecy is ridiculous. The same principles can be applied to Moby Dick to find prophecy. When we have a religious claim that can be subject to criticism and is unquestionably refuted, it is ridiculous. However, the general claim, “miracles occur” or “some doctrines, like ‘God exists’ is true,” is not ridiculous. These things must be examined on and individual basis and cannot be categorically dismissed. A person cannot say that bad theology proves that there is no good theology.

If religion is ridiculous, it follows that many prominent, world renowned intellectuals are ridiculous. This list would include men such as Isaac Newton, Saint Anselm, William of Ockham, Francis Bacon, Galileo Galilei, René Descartes, Gottfried Leibniz, Michael Faraday; the list goes on. Men who have literally revolutionized their field, who have sunk into the depth of philosophy of religion and came to the very same truth that even the simplest of men can reach, namely, that God created the Heavens and the earth and has revealed himself in Christ. If we are to say that religion is just dismissible with the wave of a hand, manifestly ridiculous, then we are forced to say they our most brilliant intellectuals were taken in by something that is manifestly ridiculous.