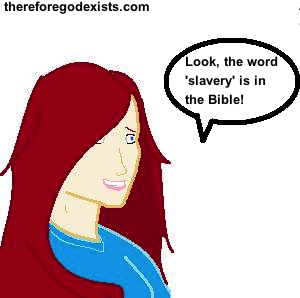 When westerners think of slavery, we immediately think of the breed of slavery which took place in the United States a few hundred years ago. In fact, there is similar slavery throughout the world and there has been slavery throughout history. There is even slavery in the Bible. But when we think of slavery, something very different comes to mind than that which was practiced in the ancient near east. Does the Bible condone slavery? In a sense, it does, but the slavery practiced in the Bible was very different from the slavery practiced throughout the world today and in the ancient near east. 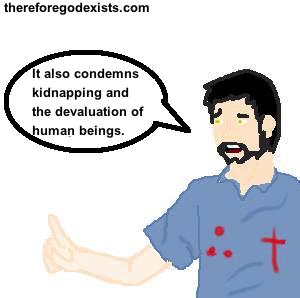 The practice of slavery in the west has a few crucial ingredients which the biblical practice of slavery lacks and even condemns. Slavery in the west has race-based devaluation of human beings. Since these people are of a particular race, they are not valued as much, and deemed unworthy of human rights. That is what happened in the Holocaust, and that is what happened when the Jews were enslaved by the Egyptians in the book of Exodus. That is the breed of slavery that we are most familiar with. Human beings are treated as less than human beings. It is said that while they possess the biological traits of a human being, they are not human persons (this sort of reasoning is what also sustains the pro-choice abortion movement). The second crucial ingredient of our understanding of slavery is kidnapping. They are hunted down, taken from their homes, and enslaved. Does the Bible condone slavery? The breed of slavery which contains these ingredients is not supported and is explicitly condemned in the Bible.

Does the Bible condone slavery? It values human beings! Every man, including those of another race, are to be cherished because we are all made in the image of God. Every human being has a common ancestor, that is, God himself. He specially created each man in his image. We are thus to love each other as we love ourselves (James 2:8). God does not see a distinction in value between races (Deuteronomy 10:17, Romans 2:11, Ephesians 6:9) and we should not either. That is why Paul said, (Galatians 3:28) “There is neither Jew nor Gentile, neither slave nor free, nor is there male and female, for you are all one in Christ Jesus.”

Does the Bible condone slavery? The apostles told masters to treat slaves fairly. Paul and the apostles were unable to undermine the social system that was in tact. However they did tell masters to stop threatening their slaves, and to recognize that there is no distinction in value between themselves and their slaves (Ephesians 6:9). They are told to treat them justly and fairly, knowing also that they are enslaved to God (Colossians 4:1). This, of course, is a stark contrast from the breed of slavery in early American history. Slaves were not regarded as being equal in value, they were threatened and they were not treated justly or fairly.

Does the Bible condone slavery? It condones willful slavery in the Old Testament. The word translated into slave in the Old Testament probably could be better translated into bondservant, since the word slave has implications that do not belong. In ancient Israel, when somebody had financial difficulties, they had the option to sell themselves into slavery, to become a bondservant. After a certain amount of time, they could either leave, or stay, if they loved their master. This was a reasonable option for people who did not want to toil just to eat every day. So they sold themselves into this servitude.

But do not let anybody tell you any differently. The Bible prohibits slavery that entails kidnapping, devaluation of human beings, and unjust, and unfair treatment.