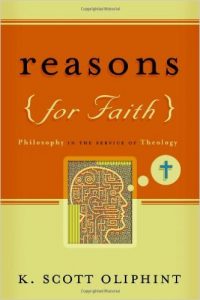 If I were to ask somebody why they believe in God, she might tell me that God is the most plausible explanation for the existence of the universe. She might say that if she were to concede her belief in God, then she would have to concede more than most people would be willing. The intellectual pricetag is too high. The presuppositional apologist might say something similar. The presuppositional apologist might say that all people, everywhere, presuppose that God exists and that this can be demonstrated by showing that God is the epistemological foundation for their other beliefs. Despite this lofty goal, the classical apologist will recognize how presuppositionalism is theistic fizz; it makes God a programmed, arational belief.

The Difference Between Cause/Effect And Grounds/Consequent

An obvious example might be believing something that one’s parents taught or acquiring some cultural value. In these cases, there is no reason for their belief. There is a cause, but there is no grounds. We might hear one debater criticize another by saying, “You only believe that because…” and point out some deficient cause for belief. If somebody only believes something because of an arational cause, she will have reason to be skeptical of that belief.

To cause a belief is not to prove that belief. A mental patient may have cause for believing that he is the messiah (that cause being the chemistry in his brain). A man may have cause for believing that his faithful wife is having an affair (his overbearing jealousy). During a late night, somebody may have cause to believe that there is a ghost in the house (she has had nightmares). But while all of these beliefs have causes, they lack grounds. They are not logical consequents and rational conclusions. They are just beliefs.

Is Implanted Knowledge A Grounded Belief?

God could feasibly implant both the knowledge and the grounds for that knowledge. But in this case, Oliphint specifically described the knowledge of God as instant and “non-ratiocinative” which is to say that it is not related to the process of logical reasoning. This qualification will eliminate any possible grounds for belief in God. The only reason that we believe that God exists is that this knowledge has been implanted in our minds.

Yet if we are made aware that the we believe because it is hardwired into our brains, that in itself should cause us to be skeptical of our belief in God. If you discovered that you believed something only because it was passed down by tradition, one can understand how you would become skeptical. Ancestry is an arational source for beliefs, since one does not pass down reasons for beliefs in genetics. In exactly the same way, hardwiring is arational. Once we discover that this is the case, we should be skeptical of it. If we are hardwired to believe in God but do not have any grounds for that belief, then our belief in God becomes unreasonable.

Classical apologetics provides what presuppositionalism cannot, namely, a grounds for the belief. Even if our belief in God is hardwired into the human brain, it can become reasonable if we acquire good reasons to believe. Acquired beliefs are examined. Implanted beliefs can just be accepted by default.

It may be that in the struggle for survival, belief in the transcendent has helped us to unite with one another, to develop cultural values and to give our lives purpose. This could account for an innate belief that God exists. An atheist could grant Calvin’s point that a sense of deity is engraved on the human heart. Innate knowledge does not seem to be enough because there could be natural causes for innate knowledge. We will need reasons to believe that God exists.

How Presuppositionalism Is Theistic Fizz; It Makes God A Programmed, Arational Belief

I want to emphasize, as I always do in my articles about presuppositionalism, that arguments and evidence do not provide the only grounds for believing in God. The gospel, God’s working on our heart and the witness of the Holy Spirit constitute religious experiences that warrant our faith. But even that is beyond the notion that we believe merely because we are hardwired to believe. Believing something that you are hardwired to believe is not reasoning, it is reacting.

The cause of your belief in God is something like the cause of the fizz in a shaken can of soda. You fizz theistically. You do not believe in God because it is true, but because you were programmed to believe in God.