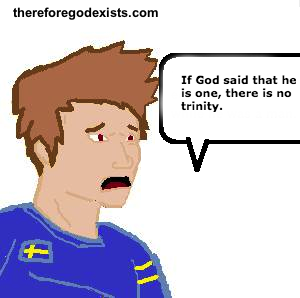 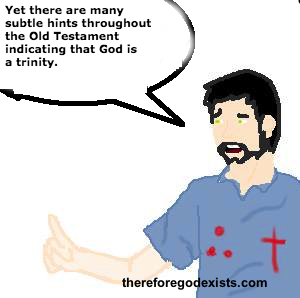 First, what is Oneness Pentecostalism? Readers of this blog will know that I have written extensively about this topic (see my series Oneness Pentecostal Heresy). Oneness Pentecostalism is a movement that adheres to neo-modalism, denying the doctrine of the trinity. They believe that God is only one person, and that person is Jesus. Jesus has simply manifested himself in different ways. Jesus is the Father, the Son, and the Holy Spirit. They claim to draw this (perhaps primarily) from the Old Testament, which declares that God is one, and therefore not three.

Isaiah 44:24 – “I am the LORD, who made all things, who alone stretched out the heavens, who spread out the earth by myself.”
It is worth beginning by pointing out that many Oneness Pentecostals believe that the doctrine of the trinity teaches that there are three gods. There is one sense in which we cannot blame them for that belief. We should blame their teaches who relayed this lie to them. There is another sense, though, in which they are responsible for learning truth on their own. A simple Google search will reveal that the Trinity states that there is one God who is eternally present in three persons. So, passages that declare monotheism actually go to support the first premise of the doctrine of the trinity, namely, there is only one God.

But this argument takes a more robust form when this particular verse is used. The Oneness Pentecostal may grant that the doctrine of the trinity states that there is one God who is eternally present in three persons. At this juncture, they may read Isaiah 44:24 and ask, “Who is speaking?” If one person of the trinity is speaking, then it would follow that the other two persons were not involved in creation. It does seem, though, that there is only one person speaking. To say, “I am the LORD” is to use a singular, personal pronoun. Therefore, they will suggest that there was only one person speaking, and this seems to falsify the doctrine of the trinity.

There are a few things that we may say in response to this. First, consider the scope of this passage. God is responding to the influence of Paganism; the doctrine that there are multiple gods who had a hand in creation. He is saying that he alone created the universe. The doctrine of the trinity is simply not in view. To use it as a falsification of the trinity is to overreach the boundaries of this passage. Second, since the Father, the Son, and the Spirit are all truly God, any of them could rightly say, “I alone am God.” There is a sense in which they are all in each other. In John 14:11, Jesus said, “Believe Me that I am in the Father and the Father is in Me.” In summary, then, whoever is speaking here has a specific scope in mind. He is referring to the being of God over and against Pagan mythology which asserts that there are other gods. That says nothing about the trinitarian doctrine that there is one God who is eternally present in three persons.

Genesis 19:24 – “Then the LORD rained on Sodom and Gomorrah brimstone and fire from the LORD out of heaven.”
The early chapters of the book of Genesis chronicle the birth of the Jewish nation, and in particular, the father of the nation, Abraham. Throughout his journey, he hears of a great city several times, and in fact, Lot (one of his kinsmen) and his wife wanted to establish a life for themselves there. But they were evil people who engaged in every manner of sexual crime. So when God approached Abraham in Genesis 18, he told him that he was going to judge them. In Genesis 19:24, we see that judgment take place. God rained brimstone and fire on the wicked city.

However, there is something remarkable about verse 24. In verse 24, there seem to be two YHWHs (the name of God, replaced by LORD in most translations). There is the YHWH on earth, who was standing before Abraham, and the YHWH who was in Heaven, sending fire and brimstone down onto the earth. Of course, Oneness Pentecostals could conjure up an interpretation of this passage. They might say that God manifested himself in different ways (he is omnipresent, after all). But the question is, what good reasons are there to think that? It seems far more plausible and natural to read the text as portraying two YHWHs, because there are two YHWHs right there. The trinitarian model seems to make more sense of this passage than the Oneness Pentecostal model.

The Angel of The Lord
The concept of two YHWHs does not exclusively appear in Genesis 19:24. It appears in this divine figure known as the Angel of the Lord. One might be inclined to think that since his title is “Angel” that he is a created being and not God. However, throughout the Old Testament, the term angel can sometimes refer to the office or the function rather than the ontology. In short, God is sometimes referred to as “the angel of the Lord.”

What does this mean? Could it just be that “the angel of the Lord” is just one more manifestation of the unipersonal God? I think that there are good reasons to think that is not the case. In Zechariah 1:12, the angel of the Lord spoke with the Lord. He said, “O LORD of hosts, how long will You have no compassion for Jerusalem and the cities of Judah, with which You have been indignant these seventy years?” Similarly, in Exodus 23:20, God sends the angel of the Lord and commands the Israelites to obey him, giving the angel his name. Since God shares his glory with no one, we may posit that the trinitarian model outstrips the Oneness model on this count.

For the sake of argument, I will not mount a case that the Son of Man was God. Since Oneness Pentecostals believe that Jesus was God, I will take it as an assumption that the one who received worship from all people and shared in the glory of God was God himself. What is significant about this passage is that the Son of Man is not the only divine figure in the vision. In Daniel 7:9-10, there is also the Ancient of Days, who is clearly depicted as God. There are two persons who are God and yet they are distinct from one another.

But there are always ways to reinterpret the text. In his book The Oneness of God, David K. Bernard made the interesting observation that in Revelation 1, Jesus is depicted with many of the same characteristics of the Ancient of Days. From this, we may conclude that Jesus is the Ancient of Days. Although, Bernard’s case seems to be overstated. Jesus had several characteristics that the Ancient of Days did not, such as eyes of fire, bronze feet, a voice like the sound of many waters, a seven-pointed star in his hand, a two-edged sword in his mouth, and his face shining with the strength of the sun. In fact, the only characteristic that they shared was wool hair. But suppose for a moment that Jesus had identical characteristics. That would still not establish that Jesus was the Ancient of Days. It would only establish that Jesus is the the exact representation of the Father. They share the same essence. They are both equally God. So, I think that Daniel 7 is plausibly a trinitarian text, given that there are two figures who are both God.

Why Didn’t The Jews Ever Believe This?
There are many more passages that we could have analyzed. The Oneness Pentecostal might point out that the Jews never believed in the trinity on the basis of those texts. Well, the first point that I want to make is that this is not necessarily true. There were Jews who believed that there are two powers in Heaven on the basis of the texts that I have pointed to. The orthodox Jewish scholar Dr. Daniel Boyarin argued on pages 89-11 of his book Border Lines that orthodox Jews regarded the “two powers in Heaven” as heresy only after the Christian concept of the trinity was popularized. It was a response to Christianity. But there were many Jews who believe in something like the trinity.

But let’s concede the point for the sake of argument. Let’s suppose for a moment that no Jew, at any time in history, ever believed that there were two powers in Heaven. Would that be sufficient to deny what these texts are saying? I should not think so. People often have their traditions so thoroughly ingrained in them that they find it difficult to think objectively. The Jews did not believe in the Suffering Servant. They did not think that the Messiah would be crucified and murdered. We have texts, such as Isaiah 53, which seem to clearly indicate that. Why did they not think that? Is the fact that they did not think that a basis for reinterpreting Isaiah 53? If you are going to be consistent, that would have to be your position.