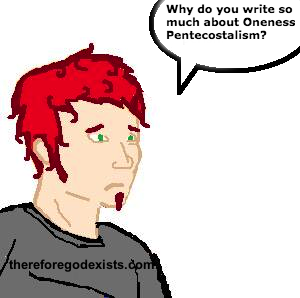 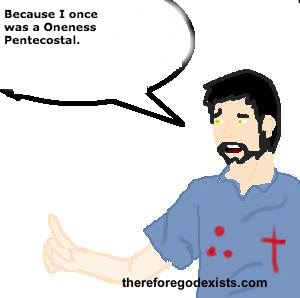 Christian preachers often argue that the Bible is true on the basis of the resurrection. They might say something like, “Muhammad is dead. Buddha is dead. But Jesus is alive” and that is meant to serve as a foundation for our belief. I think that certainly is true. But that seems to only push the question back another step. I wanted to know what good reasons there were to believe that Jesus really was alive. I sought answers everywhere, including charismatic experiences and speaking in tongues. I hoped that tongues would serve as the evidence for the faith. After all, how could I say that my faith was in vain when I knew a whole new language?

But doubt crept in, because, after all, tongues can be faked. Anyone can speak in tongues, including Pagan religionists. So I began to ask God to “strengthen my faith.” Those were my exact words, several times. I wanted God to give me a greater depth of belief; not necessarily to overcome the doubts by providing some sort of justification for my faith, but to simply strengthen my faith.

Shortly after I started asking for that, a relative of mine brought a book to the Oneness Pentecostal church and placed it on the bookshelf. It was titled I Don’t Have Enough Faith To Be An Atheist by Dr. Frank Turek. This relative of mine did not really have an interest in apologetics, so her purchasing it and bringing it to the church seems uncanny (as I think retroactively). I did not realize it at the time, but when I started reading that book, that was when my conversion from Oneness Pentecostalism began. I regard my finding that book as highly providential.

These Authors Were Trinitarians
As I read through Dr. Turek’s case for Christianity, I was very compelled by his style of writing and the points that he was making. This was very much my introduction into Christian apologetics that eventually developed into this website and podcast that I have started. After reading I Don’t Have Enough Faith To Be An Atheist, I realized that I was not finished yet with apologetics. This was not a topic that I was going to just put away. So I looked up Dr. Turek’s debate with Christopher Hitchens. This led me to the apologetics ministry of Dr. William Lane Craig and several other Christian scholars.

However, as I was watching videos of Dr. Craig, Dr. Turek, and several other apologists, I came to realize that they were trinitarians. For some reason, I had not even thought about whether they believed in the trinity. Yet these seemed like godly men. They did not seem like compromisers or heretics. They seemed like fine Christian gentlemen who labored for the name of Christ. Now, that by itself was not an argument, but it did cause me to think twice. Particularly, about the way that they defined their faith.

But that blatant misrepresentation was not the only one that I had come to encounter. Oneness Pentecostal pastors also said that other churches taught that one does not need the Holy Spirit. The Holy Spirit is unnecessary. They represented the doctrine of justification by faith alone as though it were just a sinner’s prayer that one recites and then is saved with no repentance. Everywhere I turned, every single time that a Oneness Pentecostal pastor represented the faith of other Christians, they were abjectly misrepresenting it. This experience is not unique to me, as evidenced by the fact that the majority of Oneness Pentecostals that we encounter believe that the trinity is the view that there are three gods.

What does this misrepresentation mean? Obviously, even with all of that being the case, that does not mean that Oneness Pentecostalism is false. Nonetheless, it was very significant to me that the pastors who were respected as teachers seemed to have absolutely no idea what they were talking about. They had no idea if they were correct, had never investigated what trinitarians believed, but preached it over the pulpit as though it were the truth. That was very disquieting.

The Necessity of Tongues And Baptism And Oneness Theology
By this point, I had already immersed myself in Christian apologetics and had even started this blog. However, none of the posts from this period in my life prevailed (I deleted them long ago). I was investigating the issues, but I was still a Oneness Pentecostal at the core. What do I mean? I believed in oneness theology, that baptism “in the name of Jesus” is the biblical model, and that the tongues in the book of Acts generally followed those who received the Holy Spirit. But I began to deny one crucial element of the Oneness Pentecostal faith, namely, that these doctrines were necessary for salvation.

I recall a sermon about Matthew 7:22f, when Jesus said, “Many will say to Me on that day, ‘Lord, Lord, did we not prophesy in Your name, and in Your name cast out demons, and in Your name perform many miracles?’ Then I will tell them plainly, ‘I never knew you; depart from Me, you workers of lawlessness.” The preacher declared that this verse is referring to those Christians believe in the trinity and who do not speak in tongues. If I remember correctly, that sermon marked the last time that I attended a Oneness Pentecostal church as a member.

Amazing Grace
This might seem like a nice story, but up to this point, the keen observer will note that something is missing. I merged into a trinitarian church and learned true doctrine and was henceforth a practicing Christian. That does not seem to be a sufficient end to that story. It lacks the narrative of how I was born again. Shortly after my leaving the Oneness Pentecostal church, I began to reflect on the sin in my life. I realized that I regarded righteousness as something like a legalistic cage that I had to impose on myself. The picture of the natural and carnal man in the Bible really did apply to me. Righteousness was not something that I wanted.

Somebody soon recommended me to read Dr. John Piper’s book Desiring God. Piper suggested that Christ is the ultimate fulfillment of human joy, and that if you do not have joy, then you are not a Christian. We are righteous out of our love for Christ, because our cup is overflowing and we want to share with others. After I finished the book, I listened to a sermon by Dr. John MacArthur, and the topic of that sermon was the cross of Jesus. Contemplating the cross, that Jesus Christ died for the sins of his people and that he offers the free gift of everlasting life to anyone who will believe, the love of God was infused into my heart and I was saved.

It is remarkable to think that I could go from denying the trinity and believing that only Oneness Pentecostals are saved to believing in a gospel of pure grace, a trinitarian salvation at its’ core, and that salvation is a free gift of God, that we are justified solely by faith alone in the sacrifice that Jesus made on our behalf. Writing this, I am reminded of the words of one of my favorite hymns, Amazing Grace.

Amazing grace how sweet the sound
That saved a wretch like me.
I once was lost but now I’m found.
Was blind but now I see.
‘Twas grace that taught my heart to fear
And grace my fears relieved.
How precious did that grace appear
The hour I first believed.