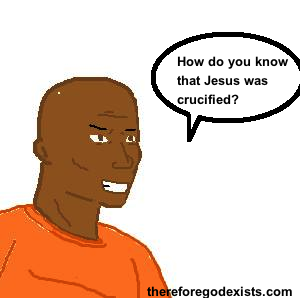 It is less than surprising that laymen attempt to call into question the gospel account of the crucifixion of Christ, because they often attempt to reduce all of Christian belief to pure mythology. But the crucifixion is one of the most profound events that ever occurred; the sheer wrath of God went on the head of his only begotten Son. As Paul Washer put it, it took the slaughter of the Son of God to justify people like us. It is not surprising that this tremendous event would be bitterly questioned by every voice from Hell. In light of this, one may ask, “Was Jesus crucified?” Despite that, it is really not questioned in contemporary scholarship. It is really only atheists and Muslims who raise this objection.

However in this article, I will not analyze the Muslims’ counter hypothesis, that Judas was crucified in the place of Jesus, and the apostles who were witness to it just did not notice that it was not Jesus. I am really only examining the claim that Jesus of Nazareth was, in fact, murdered by crucifixion under Pontius Pilate. 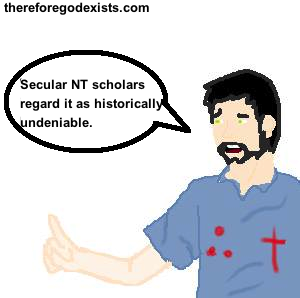 Although it is rather surprising that, in this day of information, that I would even have to post about this. This is one of the most firmly attested to historical facts. In fact, historians measure the validity of other relevant events by their consistency with the crucifixion. The atheist New Testament scholar, Doctor Gerd Ludemann said that the crucifixion of Jesus is historically undeniable.

This goes to emphasize the point that among the scholarly community, this is not an issue that is under question. Most secular New Testament scholars do hold to the truth of the crucifixion of Jesus under Pontius Pilate. The only people who call this into question are internet infidels who post pseudo-intellectual articles. But questions about whether Jesus was a mythological character, or that the crucifixion did not occur, are not taken seriously in historical circles. It is comparable to denying the round earth. Thus, when we ask, “Was Jesus crucified?” I want you, dear reader, to keep in mind that the overwhelming consensus of contemporary scholarship is that Jesus was crucified. Also, be aware that this really only scratches the surface of the historical and theological evidence.

What we should realize about traditional Judaism is that its’ lifeblood was in recited creeds, known as oral traditions. Most people in this part of the world were illiterate, and so they were taught theology through these oral traditions. This ability to memorize and teach was highly developed and prized in Jewish tradition. Doctor Gary Habernas identified 41 portions of the New Testament letters which were memorized creeds, one of them being 1 Corinthians 15:3-8.

Paul’s letter to the Corinthians was written when he was staying in Ephesus, and therefore can be dated between 53-57 AD. In 1 Corinthians 15:3-8, he writes that what he received, he delivered to you (the church at Corinth). This is the most standard form of passing on a Rabbinic oral tradition; what they delivered, they received. The next trademark is four lines. The four lines of this passage is that Christ died (earlier in letter, in 1 Corinthians 2, confirmed to be by crucifixion), was buried, was resurrected, and appeared to the twelve and to over 500 people.

This was the oral tradition that Paul said that he delivered to the church at Corinth. But who delivered this oral tradition to him? Most scholars think that it was delivered to him by Peter and James in Jerusalem (Galatians 1:18), which was three years after Christ visited him. Thus, three years after the death of Christ, there were reports of the crucifixion. But if there was anywhere that a legend about Jesus could not have arisen, it was Jerusalem. The Jews were all too eager to stomp out the Christian movement. So, was Jesus crucified? It seems to me that there are very early reports of the crucifixion and was unlikely to be a consequence of legendary development.

Despite that, the Old Testament very clearly teaches that the Messiah would be crucified. Before Jesus died, he cried out, “My God, my God, why have you forsaken me?” In saying this, he was referring back to the prophecy of Psalm 22, essentially saying that this prophecy was fulfilled with these events. Look at the following parallels between the crucifixion account and Psalm 22.