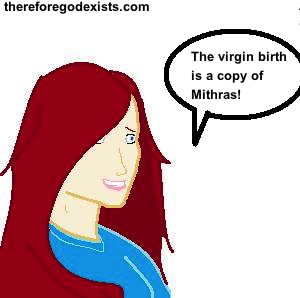 Many atheist non-historians have made a point to attack the historicity of the gospels, and the historicity of the life of Jesus of Nazareth. The point that this is an attack by non-historians is important because historical and theological scholars do not take seriously these claims. The overwhelming majority of historical scholars acknowledge that Jesus of Nazareth was an actual human being, there being more source evidence for his existence than the existence of Tiberius Ceasar (the emperor who reigned at the time of Jesus). Despite that, atheists will still say that the life of Jesus was a myth, and they defend this argument by saying that Jesus was just a copycat of older Pagan religions. So, is Jesus a copy of Pagan myths?

They will say that the gospels of Jesus have been around for hundreds of years, in the form of Horus, Mithras, Krishna, Dionysus, and various other Pagan deities. So that this story is not at all original, but rather is a Pagan invention that was adopted by the apostles, and on the basis of these stories, concluded that Jesus of Nazareth had risen from the dead. 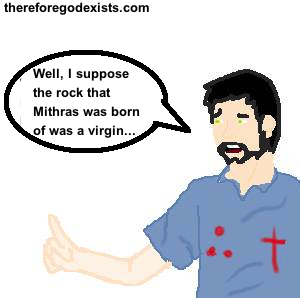 Often we will see interesting comparison charts counting similarities between Jesus and various Pagan deities (for example, Mithras was born of a rock, and that rock was a virgin. Jesus was also born of a virgin). Due to these similarities, atheists will argue that the story of Jesus is just a copy of older religions.

This hypothesis is based on a school of thought mostly represented by the History of Religions movement in Germany. But it collapsed a few hundred years ago insofar as scholarly defenders are concerned, and is only represented by laymen bloggers on the internet. So this idea of explaining Jesus of Nazareth on the backdrop of Pagan mythology does not persist at all in contemporary scholarship, but is really only represented on a popular level from atheist laymen. So, as usual, the mainstream atheists stand in stark contrast with the wind of modern scholarship. So, why do scholars not defend this position?

Is Jesus A Copy Of Pagan Myths? There Are No Parallels.

What is interesting about these internet infidels who attempt to draw these parallels is that they never cite the original source material. They will never cite the Mithraic writings, nor the writings of any ancient Pagan religion. This is because if one is to look at the original writings, one will discover that these stories are nothing like the story of Christ. The examples are absolutely spurious and completely misrepresent the stories of the Pagan deities.

The gods in Pagan mythology, for example, are often not thought to be actual historical figures, but rather, they were symbols of the crop cycle. The death and resurrection of Horus and Osiris were symbols of the crop cycle, but they were not said to have bodily rose from the dead. The body of Osiris was spread across the wilderness, and he did not actually rise from the dead. Instead, he, and the other Pagan deities, were said to have lived on in the underworld, but did not actually rise from the dead bodily. So the same with all of the examples. Mithras did not have 12 disciples, but instead, was once depicted next to the 12 zodiac signs.

These are just poor comparisons which are defended by atheists, because they prefer these conclusions, rather than seriously investigating the issue. Any serious investigation yields that conclusion that the comparisons between Pagan mythology and the life of Jesus of Nazareth always turn out to be complete misinformation and misrepresentations of ancient religion. That is this school of thought is not complimented by scholarly advocacy.

Is Jesus A Copy Of Pagan Myths? There Is No Causal Connection.

If it were true that the story of Jesus came as a consequence of Pagan mythology, it would have to be the case that the original disciples believed that Jesus had risen from the dead on the basis of these myths. The problem, though, is that a group of devout Jews would never believe that. The myths about Horus, Osiris, and so on, were known throughout Judaism, and they were regarded as utterly abhorrent. The Jews found these myths offensive and foreign to their conception of religion.

Therefore, to say that a group of devout Jews would sincerely come to believe that Jesus had risen from dead, because they read these myths, is as ridiculous as it would be for one of us to believe that our relatives had risen from the dead because they had heard these myths. There is no reason that the disciples would read these myths and believe them. There is, further, no evidence that they read these myths and believed them. In the letters to the churches, and in the gospels, they cited Old Testament Scripture, but never did they cite Pagan mythology to make their case that Jesus had risen. So there is just no causal connection between the disciples and these myths, nor is there any evidence that they based their beliefs on them.

Further, when the disciples were teaching the gospel to Gentiles, they could have easily appeased them by pointed out the merger between the gospels and the Pagan belief system, if such a thing existed. But they did not, and in fact, their story of Christ was called foreign, and strange, by Greek philosophers (Acts 17:18-20). If these stories really were similar to myths propagated throughout Pagan nations, they would not have called the gospels strange. Therefore, we can justifiably conclude that the gospels are nothing like Pagan religions.