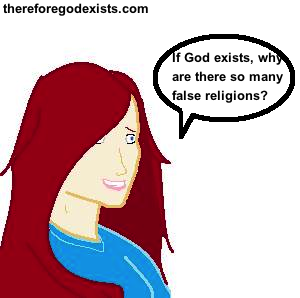 I usually cannot go more than a few days without being engaged by someone of the Islamic faith, typically offering arguments that Jesus is not the eternal Logos, that the trinity is not true and that the Bible has been corrupted through the centuries. I have been to salons with statues of Buddha, met women bearing a Bindi between their eyes. There have been a number of encounters with those who bear the Pagan symbol and I have met a number of atheists. In fact I have even initiated a blog series on How To Evangelize people of different backgrounds. The question that often arises from this is why any of this is even necessary. If God exists, why are there so many religions?

One might expect that if God revealed himself in mankind, he would disallow all false religions so that men could come exclusively to him and that there would be no confusion. 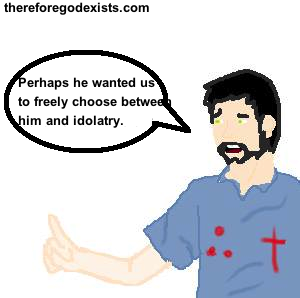 That is how this argument is usually submitted by atheists, that if a loving God were to reveal himself, there would not be so many religions. Since there are, when a rational person comes to realize that God exists, he is faced with an even more enormous problem of decided which revelation, if any, is the true revelation. But the problem becomes even more difficult because many of these revelations condemn the other, so that we had better be very diligent in determining what is the correct system of belief.

That is essentially how the argument is usually laid out, and in fact even the iconic atheists, Richard Dawkins, said that his faith was shaken as a teenager when he realized that there were people who believe in different religions just as fervently as Anglicans believed theirs. People sometimes look to the Satanic counterfeits that men worship in the world and wonder if Christian belief is like that.

So why would God allow such confusion to sting the hearts of men? If God exists, why are there so many religions?

As A Logical Argument

I always find it very important to draw a distinction between the emotional element of an argument and the logical element of the argument. As such, I cannot avoid assessing an argument from a logical angle. From such an angle, I just do not see any reason to believe that if God exists, that he would necessarily disallow false religions. It may be the case that God has morally sufficient reasons for permitting counterfeit religions to be preached.

As God said in Job 41:11, “Who has given to Me that I should repay him? Whatever is under the whole heaven is Mine.” It is often easy to forget that God is more righteous than we are, and loves men even more than we do. He is worthy of our trust, and therefore we have good reason to believe that he has morally sufficient reasons for allowing counterfeit religions.

I might hypothesize that those morally sufficient reasons are that he wants us to have free will. If men choose to worship idols, God is not going to force their hand. He wants men to either choose to come into a loving relationship with him, or reject him. But he wants them to be able to do that of their own accord. Thus to annul the counterfeit religions would be to violate the free will of men.

Suppose there were ten containers filled with clear liquid, each labeled with the word water. Nine of those containers actually contain a deadly poison, but one of them really does contain water. Do the nine false labels falsify the one true label? Well obviously not, it is still truly water and correctly labeled even if all of the surrounding bottles are not. So the same with God’s revelation to man.

If God has revealed himself in Jesus Christ, that revelation is not falsified simply because a number of groups claim to also be God’s revelation. A wide number of false claims do not undo a true claim. As Winston Churchill said, “The truth is incontrovertible. Malice may attack it, ignorance may deride it, but in the end, there it is.” Truth is true even if people do not believe it and even if people claim that something else is true.

Conviction Of The Spirit

If somebody is truly seeking God, God will, and does, reveal himself to that person. Indeed, there are thousands of Muslims in the middle east who claim to have dreams of Jesus Christ and come to be his followers.

This is represented in the Bible as well, with men such as Job, who lived during the time of the Patriarchs, had no knowledge of Scripture. He just drew near to God, and God revealed himself to him. So the same with Paul of Tarsus, in that God revealed himself to him on the road to Damascus. Men are not alone in their quest for truth. God desperately pleads with the hearts of men to come to him and be in a loving relationship with him.

False religions do not and cannot override truth. If God really has revealed himself in Jesus Christ, then that is what happened, even if everybody in the world disagreed. Truth does not depend on consensus. We should be careful with questions that begin with, Why would God… because it implies that we have an agenda for the world that God must fulfill if he is to be considered good. But that is obviously ridiculous. God is even more righteous than we are, so for us to pass judgment upon him is something like a rapist or a murderer to point at us from behind prison bars and tell us that we are evil.