A few years ago, Richard Dawkins aligned with a secular organization to publish a banner on a bus in England that read, “There is probably no God. Now, stop worrying and enjoy your life.” This message is a representation of the direction of society. Secularism has a more prominent voice than it did in recent centuries. As children of Descartes (who, ironically, was a Christian), we are less inclined to conceive of the world in light of Christian theology. We are not inclined to interpret any phenomenon as the work of God. Everything in the natural world is thought to have some sort of natural explanation. That is how we think. As this mindset has become more pervasive, a message like, “There is probably no God,” has become more acceptable, particularly in the increasingly secular England. However, ironically, Dawkins message that there is probably no God lends support to theism. This is because if God is improbable, it follows that God exists. 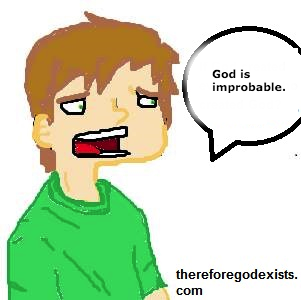 Informed readers probably know that I am preparing to mount what is known as the Ontological Argument for the existence of God. Unfortunately, the Ontological Argument is frequently misunderstood. Many atheists do not realize that there are different renderings and versions of the argument. They usually only know that one form of the Ontological Argument defines God as existing, because it is better to exist than to not exist. That is not the version of the argument that I am defending. I am outlining the version that is defended by contemporary philosophers such as Dr. Alvin Plantinga, Dr. William Lane Craig and Evan Minton. So, now I will explain why it is that if God is improbable, it follows that God exists. 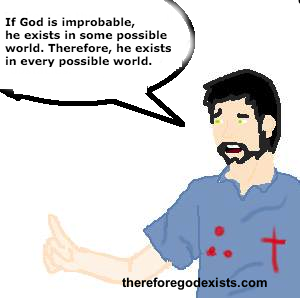 If God Is Improbable, Then He Exists In Some Possible World 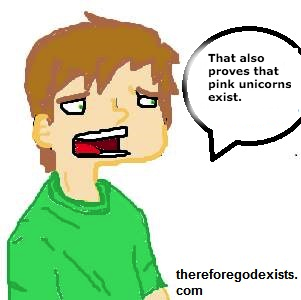 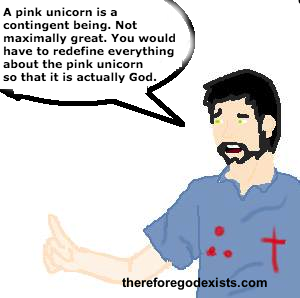 The way that Dr. Alvin Plantinga defends this argument is to use the concept of a Maximally Great Being (MGB). An MGB is a being who possesses all of the great-making properties, or all of the omnis. For example, an MGB will be omnipotent, omniscient, omnipresent, omnibenevolent, et cetera. He is the greatest conceivable being. As Saint Anselm pointed out, if you could conceive of anything that is greater than God, than that would be God. However, at this juncture, one of the New Atheists will probably blurt out in frustration, “But where is the evidence for God? God is improbable!” Let’s grant the atheist’s point for a second and suggest that God is improbable. As we have seen, if he is improbable, it means that he exists in only some possible world. But is he limited to some possible world? Are there only a slim number of possible worlds in which this MGB inhabits?

Pink Unicorns And Other Parodies

Thinking himself an intellectual elitist, the atheist will usually rejoin with some sort of parody. They will try to run a parallel argument that establishes the existence of some entity that we all regard as absurd. They may suggest that there exists in some possible world a maximally great sandwich, and therefore this sandwich would exist in every possible world. They might wave a dismissive hand as they argue that there exists a maximally great pink unicorn in some possible world which extends to every possible world. Do these parodies expose the idea that if God is improbable, it follows that God exist? I do not think so.

One could retreat and suggest that it is not truly a pink unicorn, but rather that God has revealed himself as a pink unicorn. From there, it would follow that a maximally great pink unicorn exists. The problem is that this conception of God would be an unjustified consequence of the argument. It would not be induced from the premises. If one thinks that God has revealed himself as a maximally great pink unicorn, that is something that we can discuss further. But it is not a submittable parody.

How Do You Know That It Is The God of Scripture?

Upon reading why I reject the parody of God’s revealing himself as a pink unicorn, the atheist may think to respond that attributes of God as revealed in Scripture are an unjustified consequence of the Ontological Argument. Well, first of all, that objection would not challenge any of the premises of the argument. Even if I were to accept that, it would not at all contest the conclusion that God exists. We would just have to have further discussion about whether that God has revealed himself in Scripture. However, I think that the attributes of a MGB are remarkably consistent with the God of the Bible. This is because a MGB would have to be a trinity and would have to be just.

First, a MGB would have to be a trinity. As Richard Swinburne pointed out in his book Was Jesus God? the doctrine of the trinity follows from the love of God. Since God is all-loving, he must have the intrinsic desire to express that love to another person. However, humanity could not be the fulfillment of that desire because [1] that would make God contingent and [2] God has existed for eternity without humanity. So, there must be a relationship within the Godhead. As Christians, we recognize that this relationship is between the Father and the Son. Further, Swinburne argued that the greatest expression of love is to share it with another. Therefore, he concluded that God must be a trinity. So, since we have shown that a MGB exists, and a MGB is necessarily all-loving, it follows that this MGB is a trinity. We may even revise our premise (“If God is improbable, it follows that God exists”) to be “If the Trinity is improbable, it follows that the Trinity is true.”

Second, if God is omnibenevolent, then he must be just. As I pointed out in my article Would A Loving God Send Anyone To Hell? God cannot blink at sin. It is something like when a criminal stands before a judge. If that judge were to let him go, knowing that he was guilty, we would not praise his love. We would condemn him as being unjust. Similarly, God would never be so unjust as to allow guilty criminals to go free. But that is precisely what he does in the majority of world religions. In Islam, justification is based on one’s performance. If you perform enough acts of righteousness, God will release you. However, imagine that a judge let a guilty criminal go just because that criminal did good deeds in addition to his crimes. The judge would again be condemned as unjust. This is perhaps one of the greatest conundrums in all of history. How could a loving God allow guilty sinners to go free? How can he justify us when we have sinned against him? Answering this problem, the apostle Paul wrote that God displayed Christ Jesus publicly, as a propitiation for sin (Romans 3:25). He died in our place, and just as he rose from the dead, those who put their faith and trust in him will rise with him.

So, if God is improbable, it follows that God exists. But this is not an argument for some sort of generic theism. We are arguing that a maximally great being exists. A MGB excludes every world religion that is non-trinitarian and does not provide an adequate model of God’s justice and love. Therefore, if the God of Scripture is improbable, it follows that the God of Scripture exists.

Is God Even Improbable?

Probably the primary argument that the New Atheists will use is to say that there is no evidence for the existence of God, and therefore we are justified in unbelief. But I am always a little startled when I hear an atheist say that there is no evidence for God. It makes me think that this individual has not done even a moment of research that was not tainted by bias and assumed conclusions. There is a plethora of evidence for God. Each line of evidence makes God’s existence significantly more probable than it would have been in the absence of that evidence. The existence of the entire known universe, the absolute beginning of the universe, the fine-tuning of the universe, the phenomenon of consciousness, the reality of the moral realm and the historical evidence for the resurrection of Jesus all make the existence of God far more probable than not. The atheistic counterarguments really do not weigh enough to mitigate the power of these arguments.

Further, what about Professor Dawkins’ primary argument, namely, the Boeing 747 Gambit, otherwise known as ‘who created God?’ The conclusion of his argument is that ‘Therefore, God almost certainly does not exist.’ If the argument is successful, this would make God highly improbable (which entails that God exists). However, the problem is that this conclusion does not follow from the argument. All that would follow if the argument were to succeed is that one cannot infer design on the basis of the fine-tuning of the universe. (If you would like further discussion of Dawkins’ pitiful argument, please see my article Who Created God?)

The New Atheists are usually not keen to mount many arguments of their own. Instead, they would rather point out that atheism is merely a lack of belief in the existence of God. It is only their duty to sit back and assess the arguments that theists will provide for them. However, the Ontological Argument seems to shift a heavy burden of proof onto the atheists’ shoulders. Now, they do not only need to provide evidence against the existence of God. They need to provide proof that demonstrates that there is absolutely no God. This argument really forces atheists to reformulate their position. After all, if God is improbable, it follows that God exists. So it is no longer enough to say that God is improbable. The line “God is improbable” serves as a premise in an argument leading to the existence of God.

If you would like to read similar content, check out my article The Case Against New Atheism.