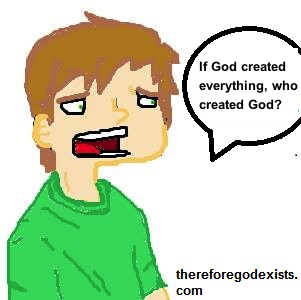 The most frequently cited evidence for the existence of God is the existence of all creation; all matter, energy, space and time, surely could not have come to be by accident, and surely it is irrational to say that the entire known universe just popped into being, uncaused, out of nothing. It is surely not implausible that the cause of all nature, space, and time, would transcend nature, space, and time. Many atheists believe that they have dealt the death blow to this type of argument, namely that if God created the universe, another question immediately arises: who created God?

I would say that the reason that this argument is so popular among Generation Y is that the zoologist Richard Dawkins attempted to write a book on philosophy, which he titled The God Delusion. The God Delusion has been the source of what has become the rallying cry among atheists, namely the who created God? argument. 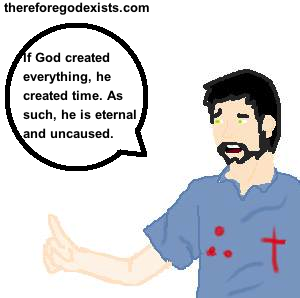 So I say again, this is a zoologist writing about philosophy, and despite its’ popularity, it is a patently fallacious argument (I will not criticize the syllogism as I did in my article How To Identify Fallacious Reasoning), but rather I will just examine the who created God? question itself).

In the words of the philosopher Doctor Alvin Plantinga, “One could say that Richard Dawkins forays into philosophy are at best sophomoric, but that would be unfair to sophomores. Indeed, his arguments would receive a failing grade in a sophomore philosophy class.” This goes to underline the point that Richard Dawkins arguments are not taken seriously by academics in a related field; his is a popular level book, not a scholarly book, and the who created God? argument as such is brimming with holes.

Must I Explained The Explanation?

For example if we came across a pit of ashes in a field, we would be justified in inferring that there was a fire, even if we had no idea whatsoever where the fire came from or what caused it. The explanation of the fire is simply irrelevant to the inference that a fire was in fact there. Now I am hesitant to use an example like this, because people tend to attack the illustration. Note well that the illustration goes only to emphasize the main point: in order to recognize that A caused B, you do not have to show where A came from.

The question of where God came from is just left in open question for future inquiry, but from a logical angle, cannot serve as an argument against God as a creator and designer of the universe.

So What Is The Explanation Of God?

Though it is not necessary to show to infer design, as I demonstrated above, it is trivially easy to answer the question of God’s explanation. Although it is a bit of a misnomer to ask who created God? because God is not a created entity. As a necessary consequence of the argument, God transcends all nature, all space, and all time. As such, he is supernatural, aspacial, and atemporal. As such, he is eternal, and uncaused.

Now this is a necessary consequence of the argument, for if we are to say that God is the cause of the universe, that necessitates that God is eternal and uncaused, and thus this cannot be rebutted by asking who created God, because the answer is necessarily that God is eternal and uncaused. That would be the case for any possible cause of space and time, it would have to be without space and without time; eternal and uncaused, because the cause of time cannot be contingent upon time. Thus it is quite irrational to ask who created God, and that is precisely why it is not regarded as a scholarly treatise of philosophy but only a popular level book aimed at people who do not know any better.

I therefore do not think there is anything fallacious about the intuition that we all have, that the natural world is a product of design. What we need to remember is that the nature of the designer is irrelevant to whether the universe is a design. Even Richard Dawkins admits that he intuitively perceives design in the universe in his book, for he said that that appearance of design is overwhelming. He just thinks it is a false intuition.

The who created God? question is probably the most frequent objection that I hear, and yet is also the worst argument for atheism.

2 Thoughts to “Who Created God?”