Skip to content
People will sometimes suggest that Christianity is a white man’s religion. The only reason that there are Christians who have a darker pigmentation is that the white man manipulated them into believing and promulgating Christian theology. Christianity was taught to slaves in the American south and now it is still promoted despite that it had those roots. Opponents of Christian belief will ask the Christian who happens to have a darker pigmentation why they would be a Christian when Christians historically treated “your people,” so poorly. White Christians have enslaved black people. Even after slavery, white Christians did not regard them as equals, did not permit the mingling of marriage and even today, there are strands of racism among white Christians. What are the implications for black Christians? Does the history of slavery prove that black people should not be Christians? 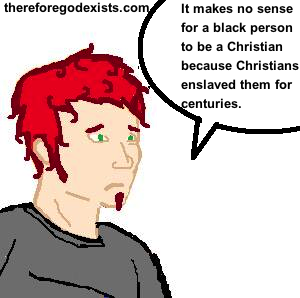 This objection seems to pull on the heart strings of the individual. The black person who recognizes their history and everything that has happened to them will recognize that their race is sacred. They will recognize that despite that, people have oppressed them and robbed them of their human value. Many people of African descent will feel a measure of pride and effervescence concerning their race. Opponents of Christianity labor to pit that pride and effervescence against their Christian faith. The Christian faith should be seen as an enemy of their pigmentation. Christianity is a white mans’ religion, and we have manipulated the black man into believing it. Is that the case? 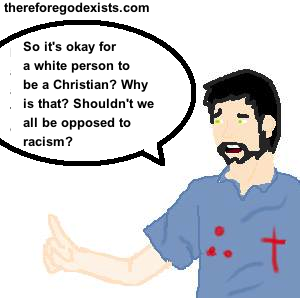 There is only one race – the human race. Christian theology proposes that mankind is made in the image of God. This means that there is something special about us that renders us distinct from animals. We have intrinsic value. Human beings have intrinsic rights. They are not to be abused or used as means to an end. Human beings are ends in and of themselves. There are many bigots who will suggest that there are some biological human beings who are not really persons, and often among them, will be those with a different pigmentation. But the Christian view is that if somebody is a biological human being, it follows that they are made in the image of God. As the apostle Paul said, unifying all races, “There is neither Jew nor Greek, there is neither slave nor free man, there is neither male nor female; for you are all one in Christ Jesus.” (Galatians 3:28). Pigmentation is merely the result of your adaptation and where your ancestors lived. It is of no more significance than a freckle or a sunburn. 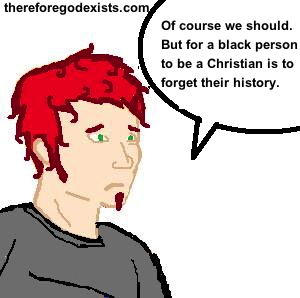 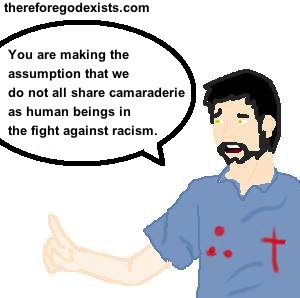 There were black people in the Bible, and probably no white people. The majority of the biblical narrative chronicles the history of ethnic Jews. Most of the people throughout the Bible were Jewish, and did not share the pigmentation of the Caucasian. Jesus was not a white man. There is a temptation among people to want to imagine Jesus as sharing the same pigmentation as they do. Many television programs about the life of Jesus will depict him as a white man. Likewise, there are some groups that depict Jesus as a black man. These varying views of Jesus’ pigmentation strike many with malaise. Sometimes white people will dislike seeing a black Jesus because they feel as though they cannot relate to him as well as they would a white Jesus. But, in reality, Jesus was not white. He was an ethnic Jew. This means that he looked like a Middle Eastern man.

This should not strike us as surprising. In fact, most of the people throughout the Bible have been non-white and usually ethnic Jews. Caucasian followers of God are an abnormality! Even in the history of the early church, most of the Christians were not white. Most were Middle Eastern. Many were even from Africa, hence, they were black. Doctor Dan Rogers, a scholar in historical theology, has pointed out in his article Evidence of Black Africans In The Bible that Abraham probably mingled with black people. The Ethiopian Eunuch in the New Testament could have been black. The descendants of Cush were probably black. Ishmael was probably black. His descendants known as the Kedarites were probably black. Does the history of slavery prove that black people should not be Christians? Not at all. They are continuing in the tradition of their earliest ancestors. There are a lot of black people throughout both the Old and the New Testament and there is no indication that there is an inferior pigmentation.

Should black people be Americans? This detractor of the Christian faith in this situation is not so interested in logical discourse. They are interested in emotional manipulation. They are not asking whether they are being reasonable. They are asking how they can manipulate this individual into abandoning their faith. There is an underlying logical assumption in this argument that is being ignored. If an adherent to a system of belief treats me poorly, does it follow that this system of belief is false or immoral? Does it follow that they are abiding by their pure and undefiled beliefs? Think of it like this. Imagine that I were once beat up by a group of black men. Later, I am found associating with a friend of mine who happens to share the pigmentation of my persecutors. Am I behaving inconsistently? Of course not. Indeed, it would be foolish for me to say that I cannot associate with any black people because in the past, some have treated me poorly.

European men would invade Africa and kidnap people. They would take people from their homes, separate them from their families and sell them as though they were a mule. The only difference is that it is illegal to steal a mule. Yet this practice is forbidden by the Bible. Exodus 21:16 reads, “Whoever steals a man and sells him, and anyone found in possession of him, shall be put to death.” Further, one of the more abominable practices of these slavers was the practice of sex slavery. But the biblical data also forbids that as I demonstrated in my article, Does Islam Allow Sex Slavery? Does the history of slavery prove that black people should not be Christians? Not at all. It proves that Christians have disobeyed the Bible.

This will lead one to ask different questions. It will lead one to ask who Jesus was. It will lead one to ask whether he was telling the truth about his claims and ultimately, whether he actually rose from the dead. If Jesus really did rise from the dead, then we can be confident that he was who he claimed to be and that he has the authority to forgive our sins and give us the free gift of eternal life. I would like you to begin exploring the available evidence and looking for answers to this question. As a Christian, I am firmly convinced that God exists and that he raised Jesus from the dead. You will notice that you have stumbled upon a website titled “ThereforeGodExists.com”. I engage with the claims of atheists and present evidence for the Christian faith. You may begin by reading my article, Did Jesus Rise From The Dead?