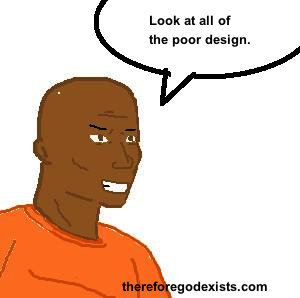 The concept of unintelligent design is a response to the creationist movement and philosophy of intelligent design. It proposes that there are too many flaws in the universe to have been created by an intelligent agent. If this argument is successful, it leads to the conclusion that an omniscient and omnipotent and omnibenevolent creator is not the cause of these things. Yet it does raise an interesting point. As we render our argument that the universe is designed, how can we explain that there are some things that are designed poorly? If God designed the universe, why is there poor design? 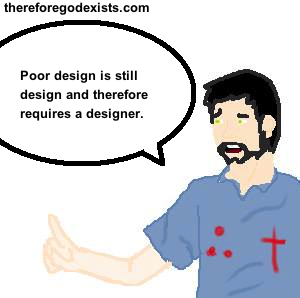 This argument usually manifests as a response to creationism. The idea is that God could not have created man, or the universe, as is, because there are too many flaws. There are biological and cosmological treatments of this argument, such as the objection from the human appendix. The human appendix serves little to no biological function, is more apt to kill you than anything, and therefore God would not have created such an organ. There is the objection from the human eye, that there are receptors in the front which loop around in an indirect route, while it would be more convenient if the receptors were in the back. There is also the uninhabitable universe and even the earth, that much of it is uninhabitable, and therefore God could not have created human beings for it. 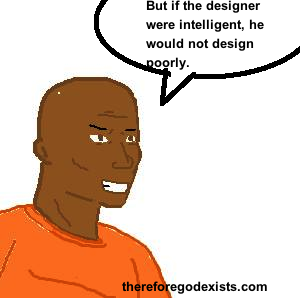 Poor design is still design. You and I are on our way to a Nickelback concert. I am quite reluctant, but acquiesced upon your desperate pleas. With tears in your eyes, you cry out, “The Backstreet Boys are headlining for them! Give me a ride! Please!” As we are driving down the highway, my vehicle begins to emit a strange mechanical sound, and it precipitously slows down and I am forced to pull over to the side of the road. You and I exit the car and look inside the engine. In frustration, I say, “Ah! They must have sold me one of these self-designing cars. No intelligent designer would have assembled a car that malfunctions.” You find yourself nodding in agreement of my assessment. However, later that night, in a flash of insight, you realize that just because my car was designed poorly, that does not mean that it was not designed. You further conclude that a poor design is still a design and demands a designer. Therefore, the conclusion that my car did not have a designer is not only unwarranted, but it seems that the opposite conclusion is warranted. If my car was designed poorly, then it had a designer. It was designer poorly. Therefore, it had a designer. 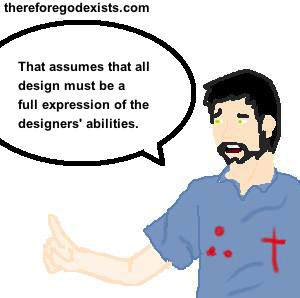 Is God an engineer, or an artist? Imagine that you were an architect as a professional career. But as a hobby, you also enjoy painting, particular old colonial houses. Well, your employer has assigned a project wherein you are part of a team that is assembling a colonial home. After a few weeks of diligent progress, your employer visits your home and sees some of your paintings of colonial homes. Furiously, he tells you, “Johnson! These will never function as blueprints. These are paintings! What in the world is wrong with you?” Obviously, your employer thinks that you intend for your paintings to function as your architectural work. Then you reveal the actual blueprints and his anger subsides.

This is akin to the mistake that the atheist has made in saying that the universe is too expansive to be created by God. The atheist is assuming that God’s work is like that of an engineer, which is just functioning to get the job done, when he could be more like an artist. God could enjoy the process of creating. This would seem to shut down the objection that suggests that the universe is too large to be created for us. There is too much in the world that is uninhabitable. Well, perhaps the reason that it is uninhabitable is precisely that it was not intended to be inhabited by us. We were not intended to live on the surface of the sun. We were not intended to live in the depths of the ocean, resting our head on the ocean floor. If God designed the universe, why is there poor design? In the case of the expansive cosmos, God created these things because he enjoys creating, and it is not all about us.

What are the designers’ intentions? I challenge you to a game of basketball. You are not very good at that particular sport, but you thought it might be fun, so you agreed to the engagement. When you arrived, you saw me dribbling a giant beach ball up and down the court. As I prepare for the game, I try to sink the beach ball into the net and I am growing more frustrated as I seem to be accurate, but it just keeps falling off without sinking. I complain, “Who designed this ball and this net? What a terrible design!” I write a letter to the manufacturers of the beach ball and the basketball hoop complaining of this flawed design. After a few moments of heavy contemplation and philosophical reflection, you come to realize that the problem is not the design. The problem is that I am holding an expectation of these designs that the designer did not intend. They are suboptimal because I am misusing them. I have assumed that the designer intended the beach ball to be thrown into a basketball hoop.

This is logically equivalent to what the atheist has done in complaining that there is poor design in the universe. We may look to biological organisms and say that the features of that organism are such that no intelligent designer would create them. But all we have done is make assumptions about the designers intentions. A panda bear may have suboptimal thumbs relative to the needs of a human being, and so we might look at them and complain that the designer did a poor job. However if one looks at the bears’ natural habitat, one discovers that the he uses his thumb for shedding bark. Therefore the bear might look at our thumbs and call them suboptimal because they are insufficient for the purpose of shedding bark. If God designed the universe, why is there poor design? The notion that a design is optimal or suboptimal cannot be assessed unless we know the intention of the designer.

We are not God’s pets. When we say that an organism is not optimal, we mean that it is not optimal for the flourishing of human beings or for human happiness and survival. But the intention of God as revealed in Christian theology is not one that ends in the flourishing of human beings, happiness or survival. The end of God, according to his revelation to man, is that we come into his mercy, are conformed to the image of the Son, justified, and glorified. God wants to glorify himself and for all of his creation to glorify him. Therefore, there is sin in the world so that God can reveal his wrath and his justice. If there were no sin, there would be no cause for these things. So, we see an imperfect world because only in an imperfect world could God reveal his perfect attributes to us.

We are not God’s pets for whom he wants to create a comfortable environment, and it is therefore no surprise that the design reflects a lack of concern for human comfort and flourishing. It could be the case that it was the purpose of God that some areas of the earth are uninhabitable for humans, just as it could be the case that it was God’s purpose that some things cause us discomfort and suffering, because our worldly comfort is not a priority. The priority is instead that God would be glorified, and that God’s people comes into a loving relationship with their Creator. Everything else, including comfort, is secondary. That is not to say that all suffering and discomfort goes to support salvation, however, it is to say that man was not created with such things in mind, and therefore we should not be surprised at the lack of interest in mans’ comfort and flourishing.