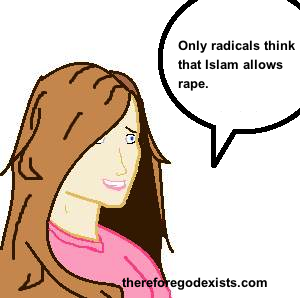 It is tempting for us to be sympathetic with our Islamic friends who want to disassociate themselves from the renegade terrorists who blow themselves and kidnap young children, taking them as sex slaves. Muslims who grew up in the west (and perhaps many even in countries where Islam is the majority religion) think that the uprising of jihad is a stain on Islam. It is like if somebody stole my car and then used it to evade the police after robbing the bank. You would not blame me for their crimes. They stole my car. Likewise, contemporary Muslims contest that these renegades have hijacked Islam. They stole Islam. They are committing the wicked deeds of their heart and sprinkling it with Islamic language. Is that the case, when examining of the most vile practices of these men? Does Islam allow sex slavery? 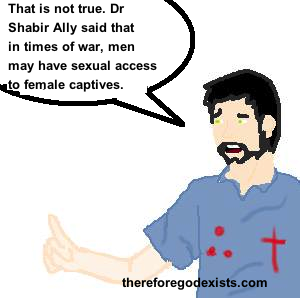 We are told that no real Muslim would condone such behavior. Practicing Muslims who adhere to Qur’anic values are peaceful people who want to live in harmony with folks of other religions in society. It is akin to skeletons in the closet of the history of Christian church. Church history is marked with iniquities such as the Inquisitions and the Crusades. Just as Christians are viewed as peaceful people and their doctrine is peaceful, so also Muslims are peaceful people with peaceful doctrine that has been abused by a group of wicked men. This is the model that we have been presented of Islam. Of course, it cannot be denied that there are a lot of nice and peaceful Muslims. The question is, what does their doctrine teach? Does Islam allow sex slavery?

Spoils of War. As we reflect upon the barbaric armies of history, it is difficult to understand how men could demonstrate such depravity, and how rulers could just shrug their shoulders and suggest that it is just part of the paradigm of war. For when an army is defeated, and a city is conquered, the residents of that city who were not participating in the war were just bystanders. They were not fighting. They are waiting for their husbands and sons to return from the battle. They and their children are crouched down in dark corners of their home as they listen to howl of screaming men and the constant clamor of steel against iron. These children, who have never been away from their father for more than a day, are wondering if they will ever see him again. They hope that they can just fall asleep, so that when the sun breaks across the horizon, their loved one will return and their incessant weeping will be undone. Many of these mothers knew that if they had been freshly widowed, the conquering army would take them as spoils. They would not only lose their loved ones, but they would kidnapped and repeatedly molested, and those with daughters knew that their daughters would suffer the same fate. This is the reward that men would take for themselves when they won a battle.

Yet anybody with the slightest inkling of a moral intuition knows that such a behavior is unworthy of the people of God. God could never prescribe such a behavior. It would be contrary to his character and his nature to allow his creatures to command such a behavior. Yet this is what we see in the Qur’an. When the renegades would win a war, they would take females as sex slaves. After one particular battle, the renegades wanted to force themselves on these women, but they were afraid that they would get them pregnant. But Muhammad, offering what must have been seen as brilliant theological insight, said, “It is better for you not to [ejaculate outside of the vagina], for if any soul till the Day of Resurrection is predestined to exist, it will exist.” (Bukhari 5:59:459) Likewise, when married women were captured, the renegades were told that they were permitted to have sexual access to these women. While married women are forbidden in a normative context, they were not forbidden when they were captives of war (Qur’an 4:24). So even while their husbands were still alive, perhaps even watching, these Muslims men took these women and had sex with them. Does Islam allow sex slavery? Well, the question is, do you really think that any of these captives of war were willing to have sex with them, after their husbands and sons just fell in battle? What of those whose husbands were still alive?

One might be inclined to think that this is just a critics’ view of Islam. I am just a critic, on the outside, looking in, making accusations because I am a mean person. But, astonishingly, this is conceded, by one of the most reputable and well-known Islamic scholars of the day. He acknowledges everything that I said in the above paragraph, and he proposes it as a morally acceptable view. In explaining why Boko Haram was wrong to kidnap schools girls, Doctor Shabir Ally pointed out that they distorted Islamic law. Islamic law does not teach that one can just invade any place they want and just take anyone. Rather, according to Doctor Ally, “It is traditional Islamic Law that if the result of the war would be that if Muslims are victorious, they would pick up the spoils of war… women were taken as captives and then allotted to the male soldiers or sold on the open market. If they were allotted to a male soldier, it was taken for granted that the male soldier would have access to her sexually, as though she were a wife, but the difference is that she was not free to leave.” (Start the video to the left at 4:03 to hear the quote.)

Even the most conservative Islamic scholars, who are revered as intellectuals, who oppose radicalism, are forced to concede that in Islamic law, women can be taken as sex slaves during a time of war.

Was the Islamic system superior to the surrounding civilizations of that time? Of course, one could appeal to a cultural understanding of the renegades’ behavior. That was just, as it were, the way of war. Since everybody else is doing it, we can understand that the renegades would adopt it, for it was a custom of that day. We can understand the cultural system in which they were living. Well, I am inclined to first point out the theological problems with this. Muhammad is said to have received these suras from God himself. God told Muhammad to allow these men to force themselves on married women, and to ensure that they ejaculate inside of the vagina because what is predestined to happen, will happen anyway, so our actions do not really matter (my fingers are itching as I deny myself the space to point out the logical error in Muhammad’s reasoning). If God is giving these commands, then clearly it is insufficient to appeal to the cultural standard. Is it not possible for God to have provided a system that was not morally repugnant? Could God have provided a system that was morally praiseworthy? One that does not reflect the wicked desires of the human heart?

In fact, that is precisely what God did, and it shuts down the argument from cultural comparison. For there was another society that even within a culture of evil behavior in times of warfare, made allotment to treat captives of war and prisoners with respect. What we see the Jewish Torah is a model of treating captives of war with civility, in a way that far exceeds Shari’ah. There is no rape, for rape is strictly condemned (Deuteronomy 22:25-27), and sex outside of marriage was condemned (Deuteronomy 22:28-29). Men are not given “sexual access” to a woman “as if she were a wife.” This may be taken, then, as an assurance that women are not forced into sex slavery.

They are taken as wives, but only after a month of mourning for their families. (Deuteronomy 21:10-11). Men do not charge into the homes of women who just lost their husbands or sons and molest them. Yet there was no prison system, so what are we to do with them? They are taken as wives. The men are instructed, “It shall be, if you are not pleased with her, then you shall let her go wherever she wishes; but you shall certainly not sell her for money, you shall not mistreat her, because you have humbled her.” The men are commanded to treat their new wives with respect. Further if they are neglected by their husband or divorced, they are freed. If they are divorced, they are also freed (Exodus 21:10-11). These laws may be taken as an expansion of Numbers 31:18, which reads, “But all the girls who have not known man intimately, spare for yourselves.” It may be tempting to read sexual slavery into that verse, but considering the host of laws that forbid it, that interpretation is nullified.

Does Islam allow sex slavery? According to the conservative scholar, Doctor Shabir Ally, who has a doctorate in Qur’anic exegesis, it absolutely does. It is insufficient to appeal to the culture around them because [1] according to the Qur’an, God gave these renegades direct permission to rape these women and [2] there are societal models cut from the same mold that are morally praiseworthy.