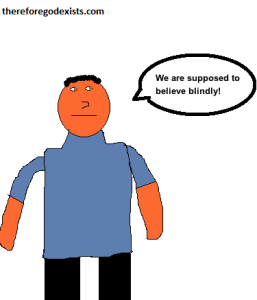 Sometimes when a person is expressing their lack of religious belief, they will explain that they are more compelled science than they are religion, the insinuation being that we must choose between science, intellectualism, and religion, that we cannot hold on to both. This may be partially due to the vehement criticism of science in the church, the absolute opposition to any advance in knowledge aside from that which is biblical. Thus when young people are in school, they are left to think that they must either choose between what their teachers are telling them and what the church is telling them. However I think that this is unjustified, the problem is that these people are simply not exposed to credible answers or any sort of Christian apologetics (or, a defense of the faith). So do Christians need apologetics?

I would say, that depends! Sometimes Christians are in a position where apologetics really would not help them, nor do they have the time to learn about these things, and for them I would say that there is nothing wrong with staying strong in your Christian faith without apologetics. However, I think that for parents and students, apologetics are a very helpful, and often important resource. 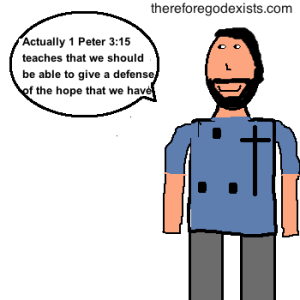 In fact, I myself came to faith after being exposed to Christian apologetics, for some people need Simple Answers To Difficult Questions which often stump Christians, relating to why God permits evil and suffering, why we believe in Christ, why we believe the scriptures and so forth. These are questions which often leave Christians stumped, and when a young person is challenged intellectually on that level, and sees that nobody in their life has any answers, how will they react?

Often it is not enough to teach our children Bible stories, in our world, they need doctrine, and they need apologetics so they can know that there are answers to these difficult questions. Today, three of every four young people leave the church either in high school or in the early years of college, relaying to their parents, “Mom, dad, I do not believe in God anymore.” Suppose your child said that to you.

Call it spiritual warfare, or whatever you will, but often in liberal universities, there are professors who target outspoken Christian students to the end of persuading them to abandon their faith in Christ, and they do this by exposing the ignorance of the students. There are professors who will argue that the historical figure, Jesus of Nazareth, never even existed, and they are able to fool their students because the students have no idea how to approach this issue intellectually. Despite that this view is on the outskirts of scholarship and not seriously defended, because they are a professor, the student is forced to take them at their word.

This is not a problem that is exclusive to backslidden Christians or those whose faith is not too strong. I admit though that often, people who are subconsciously looking for an excuse to abandon the Christian faith are the ones who are most vulnerable to these types of attacks. But there have also been cases of parents who thought their child’s faith was strong as they left for college. Regardless of how strong their faith is, parents often make the detrimental mistake of sending their children in a warzone, unarmed, and unarmored; no answers to the questions that are posed to them. As Doctor William Lane Craig rightly said about this, how dare we.

Further, this is not always necessarily a case of an intentional assault from the educator, but rather they are just teaching what they believe is best reflective of the curriculum, such as an old earth, the Big Bang, macro-evolution, and so forth and the student, remembering how sternly their pastor condemned these positions, comes to the realization that if the Bible contradicts these things, and if these things are right, then the Bible must be wrong.

So I say again, both the church and parents often fail to give young people any answers to difficult questions at all, so they are left with their doubts being piled up every day. Do Christians need apologetics? Church ministers, parents, and young people absolutely do.

People often argue that if we apply apologetics and teach our youth arguments, we are feeding them cleverly devised fables as spoken of in 2 Peter 1:16, that we are giving them philosophy, argumentation, but not the word of God. I would say that this is a fundamental misunderstanding of what apologetics is. I am not, nor would any apologist that I know, argue that we need to replace evangelism or the word of God with apologetics. But rather, apologetics is a slave to evangelism.

The Holy Spirit is ultimately the one who convicts and converts, but often God uses men to bring people into himself, which is why we do evangelism. So the same with apologetics, God can use men to edify and bring struggling people into a greater understanding. As 1 Peter 3:15 tells us, Always be prepared to give a defense of the hope that you have, but so so with gentleness and respect.

In fact, even 2 Peter 1:16, which tells us that we are not to use clever fables, appeals to apologetics, Peter writes that he was witness to the majesty of Jesus Christ. He was an eye-witness, and as such he was not telling people to simply believe, blindly, but rather he was telling people to believe based upon his, and others, eye-witness testimony. Paul commanded in Acts 17 to search out the scriptures, to see if what he was saying was the truth. The Old Testament is filled with genealogy reports and settings so that those who want to investigate the story to see if it was true were enabled to.

The Bible is filled with calls to confirm what is being said. It is not a myth that we are supposed to just accept. If we do an actual intellectual pursuit of truth, we will find ourselves satisfied, and that is all I ask that churches do with young Christians and parents.

To that end I posted an academic debate between a Christian and an atheist to the right. I also recommend the book I Don’t Have Enough Faith To Be An Atheist by Doctor Frank Turek.