There is something to be said about teaching children Christian truths at a very young age, for even Jesus promoted it by saying that if we teach them things when they are very young, they will not forget it, and in Timothy 3:15, we are commanded to remember what we learned even as children. Atheists will often call this indoctrination, that Christians are leading their children astray, and in fact that even babies are atheists until they learn these these. But is that the case, are we all born atheists?

Atheists often defend the idea that Christian theology leads children astray by positing that everybody is born an atheist, that atheism is the default state of existence, as they so define it as a lack of belief in God, and babies do lack a belief in God as a default. So are we all born atheists?

What Else Do Babies Lack A Belief In?

I am probably willing to concede that babies do lack a belief in God, for they lack also the mental capacity to conceive of God or ask any deep philosophical questions. Babies do not question their existence, nor do they question where the universe or human life came from. They are completely ignorant, possessing a mental capacity comparable or even inferior to lower animals, so it is no surprise that they lack a belief in God, or anything.

As it happens, babies lack a belief in anything, including the milk that they are drinking. Babies even lack a belief in physical objects, and all of the basic beliefs that human beings hold. They only come to grasp them later in life as they begin to observe the physical world, and so the same with belief in God. If the atheist is to say that babies are born atheist, because they lack a belief in God, a parallel argument could be applied in saying that the default state of existence is lacking a belief in physical objects. But that would obviously be absurd, a babies’ lack of belief is only reflective of their ignorance, the default state of existence is not developed until later as we begin to learn and observe about the natural world.

Since they are completely ignorant, it could be argued that if atheism is the default state of existence, then so is ignorance, because we all begin ignorant. Knowledge only comes when people begin to indoctrinate us with it. Further, babies are born lacking a belief in evolution, so perhaps it could be said that a lack of belief in evolution is the default state of existence.

I think it is patently absurd to say that newborn babies are the model for the default state of human existence, and this is basically the mistake that atheists make. 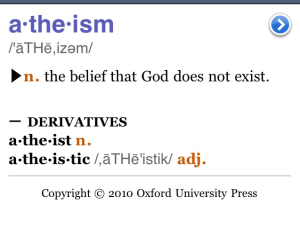 As I pointed out, atheists often will emphasize that to be an atheist, we need only to lack a belief in God, and they do this to avoid bearing any sort of burden of proof in making a claim that there is no God. Typically they justify this stance by appealing to the Oxford Dictionary, which, I admit, does define atheism as a lack of belief in God.

But there is a reason that they appeal to the Oxford Dictionary, and that is because it is basically the only popular dictionary which agrees with them. However even if it were the case that every dictionary unanimously agreed that atheism is the lack of belief in God, we still cannot use a normal dictionary as a foundation use for philosophical terms. We need a dictionary of philosophy, because while atheism, in grammar, might mean a lack of belief in God, we have to see how it is defined as a philosophical concept. But in even the Oxford Dictionary Of Philosophy, atheism is defined very clearly as the belief that there is no God.

This is just a standard reflection of all work in philosophy, as even atheist philosopher Doctor Michael Tooley pointed out in his debate with Doctor William Lane Craig, “Atheism is so defined as the belief that God does not exist.” However to avoid quibbling over terms, I usually just appeal to the term naturalism, or the view that nature is all that there is, and this keeps the burden of proof, appropriately, on both sides.

Therefore, to be an atheist, one must believe the universal statement, that there is no such being as God. Now, that is not to say that everybody must take this stance, obviously, people are free to take any stance that they like. But to call yourself an atheist is inaccurate if you do not believe this statement (even though most atheists will say it, but refuse to defend it).

From this philosophically accurate definition of atheism, it follows that nobody is born an atheist, for nobody is born believing that God does not exist.