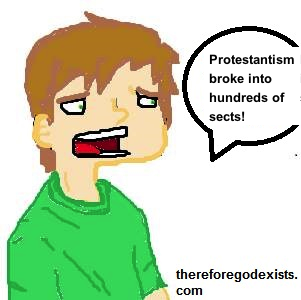 A man has been slowly seeking answers about Jesus, eternity, salvation, the Bible, and so forth, and after a considerable amount of time, he finally admits that the Bible is the word of God, and that he wants to come to know what God’s will is for his life. Of course, when this occurs, it is a tremendous victory. However another problem immediately arises in western Christianity: which denomination should he join? Which denomination is accurate? Is only one accurate? This sort of question, for some people, can be rather discouraging because it is rather difficult. So are denominations good or bad?

Of course, this is often an attack that the Catholic church makes against orthodox biblical Christianity, that Protestantism immediately broke into many different sects across the world. 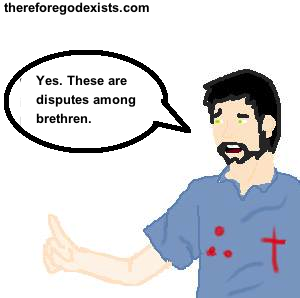 Therefore, the Bible teaches that we all have the authority to read and interpret the Scripture. An inevitable consequence of that will be that we come to different opinions.

It is obviously a good thing for us to align with a biblical precedent, and Paul did set one down when he said that even children can read the Bible, and when he commanded laymen to read to see if what he was saying was the truth. So the view that anybody can read and interpret the Bible is obviously a good thing since it is biblical. Often we do come to different conclusions about secondary doctrines based on our interpretations.

So in regard to the fundamental truths of Christian belief, such as salvation by faith, the trinity, the exclusivity of Christ, and so forth, we usually agree. Most denominations agree about the core doctrines, while only disagreeing about things such as, how God made the world, how God will end the world, the manner in which we are elected, and so on. But most of the Christian denominations that we encounter maintain beliefs that do not compromise salvation. These disputes are disputes between brethren.

Unfortunately, many ministers have abused their ability to freely interpret and read the Bible, creating doctrines that compromise orthodox biblical beliefs. There are denominations that turn men against the body of Christ, condemning those who say that because they have put their trust in the Lord Jesus Christ, they will be saved. There are denominations that can lead people away from God and away from what the Bible tells us.

But new Christians are vulnerable to this sort of thing because they do not know anything about the Bible. When a Jehovah’s Witness knocks on their door and seems to be trained in biblical studies, they are forced to take the JW at their word and on their authority. After attending a few meetings, they become ensconced.

Therefore the bad part of denominations is that people abuse it. They deny their brothers in Christ and separate from the rest. This has happened since even the very early churches, when Jezebel mislead the church in Revelations 2, when Sabellius ascended and presented modalism to the world, when Joseph Smith offered a false revelation to the United States. This is the bad consequence of denominations.

How To Recognize A False Denomination

The easiest way to recognize a false denomination is to understand the Bible and study it in context. When somebody gives you a verse, read the entire chapter to see if what are really saying is the truth. As we understand our Bible, when we hear false preaching, a red flag will immediately rise up and we will know that this is a false denomination.

Further, there are a number of indicators of a false church. Almost every false church rejects the doctrine of the trinity. The trinity is something like a measuring stick, with which we can hold it up to a church to see if they are teaching the truth. Mormons, Jehovah’s Witnesses, modalists, all of them reject the doctrine of the trinity. They will also reject salvation by faith in Jesus Christ.

But as I said, the most important element in regard to identifying these groups is to read and understand our Bible. There is a reason that 99% of Christianity disagrees with this particular group.