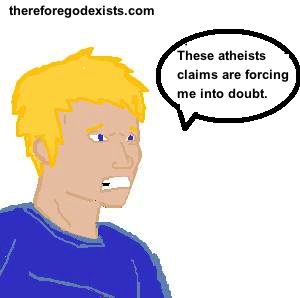 The problem of doubt has arisen in the mind of almost every Christian throughout history, and in fact, non-believers sometimes have an axe to grind, namely, to persuade people to doubt their faith. This is especially prevalent in modern society, with the advance of modern science and the claims of scientists and laymen about what they think scientific discoveries say about the existence of God. This sort of doubt is something that Christians of previous generations may have not had to deal with. Certain atheists within pop-culture will attempt to paint the existence of God as though it were just silly, and many, especially backslidden Christians in high school or college, are taken in by them. How can we combat this sort of thing? How should Christians handle doubt? 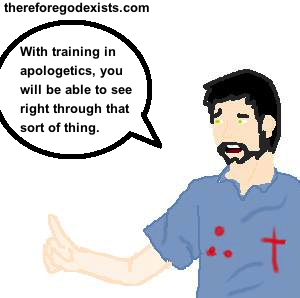 Although the idea of belief in Christ is not the norm in western society, but rather it is thought to be small-minded and intolerant. Pop-culture will attempt to paint Christian belief as though it were under heavy dispute in the academic community. There are numerous authors who appear on popular television (especially around the time of Easter) writing about the real story of Christ, or the real gospels.

This just goes to highlight the point in today’s world, doubt comes from all different sources. Indeed there are a number of atheists who I have encountered that openly admit that their goal is to persuade people to abandon their faith. Richard Dawkins, one of the most famous atheists in the world, commanded younger atheists, at last years’ rally, to mock religious believers, and ridicule them in public. In this way, they will feel compelled to abandon their belief. The problem of doubt in the contemporary west has been empowered. So then, how should Christians handle doubt?

When we have doubt, we need to return to the roots of our faith and remember how the God of all creation changed us into a new creature, and gave us a new heart with new desires. As the hymn writer said, “You ask me how I know he lives? He lives within my heart.” Even those of us who are not privy to apologetics do not have blind belief, but rather we believe because we have encountered the risen Lord. It is something like if you are accused of murder, and you did not do it. If you go to court, the prosecution might stack up evidence against you, but you know that you did not do it. So the same with our belief in Christ; they may stack up evidence, but we already know him based on our relationship.

Therefore we should not allow ourselves to be tossed to and fro, and carried about with every wind of doctrine. We need to stand firmly on the foundation of our relationship with Christ. When we have a doubt, we need to recognize that it is an emotional problem, not an intellectual one. Sure, there may be an intellectual aspect to it sometimes, but overall, it is probably an emotion problem. It is sort of like if an over-jealous boyfriend arbitrarily suspects his faithful girlfriend of cheating on him. He may have all of these negative emotions, but they are without substance. So the same with our doubt. An atheist may show us a picture of suffering children and ask how it is that we can believe in a God who would allow such a thing, in affect playing on our proverbial heart strings.

When we remember that this is more of an emotional problem, it should be easier to overcome, because we recognize that we are being fooled by our emotions. When we are being fooled by our emotions, like in the case of an over-jealous boyfriend, the dilemma is usually without substance. So it seems to me that when we are confronted with a doubt, we need to ensure that we are separate the emotional element from the intellectual element, and that should help us to identify where our problem is.

When we encounter these Easter skeptics who tell us that Jesus never existed, or that the alleged body of Christ had been found, it seems to me that if we know how to answer these questions, we will not have any doubt. If somebody asks, If God is good, why is there evil? and we know how to answer that question, then it will not be a problem for us. If we have training in apologetics, when a new wind of doctrine comes along, then we will be immovable and will not stagger.

When an internet author comes along and tells us that Christ never existed, if we have a knowledge of the history of gospels, we will laugh at this sort of thing because we know the consensus of contemporary scholarship. When somebody tells us that the Big Bang disproves the existence of God, we will be less than convinced, to put it mildly, because we know that the Big Bang serves as evidence for God’s existence. So when one of these pop-culture atheists comes along and says something that is intended to cause us to doubt, those of us with training in apologetics see right through it.

Apologetics, especially for this era, is a tremendous help. When we are confronted with an intellectual obstacle, our training in apologetics will help us to overcome it. This applies not only to the claims of atheists but also to the claims of heretical Christian sects. When we understand our Bible, we will not be vulnerable when a Jehovah’s Witness or a Mormon knocks on our door. So the same with apologetics. When we understand the issues, we will not be vulnerable when an atheist raises difficult questions.