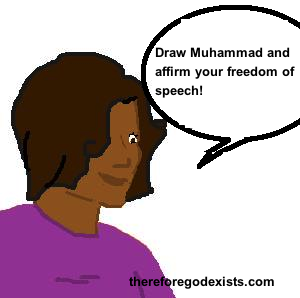 With the terrorist slayings in France in recent weeks, there has been a storm of controversy, questions about freedom of speech and respect for religion. Moderate Muslims contest that while the slayings should not have happened, westerners still should be respectful of Islam and their Prophet. After all, they argue, the west finds entertainment at the expense of offending Muslims, yet at the same time, is very sensitive about antisemitism. A good conservative Christian, then, will be caught between their Christian faith and conservative ideals. They want to be kind to people, but at the same time, they want to maintain freedom of speech. A Christian might feel compelled to draw Muhammad, just to show that they can draw Muhammad. What is the proper Christian stance? Should Christians draw Muhammad? 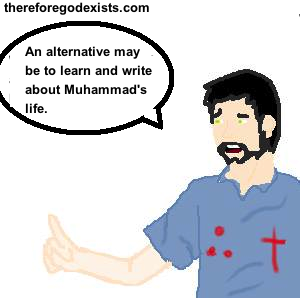 First of all, I indicate that there are boundaries for freedom of speech. Freedom of speech ends abruptly where hate speech begins. The defining clause within hate speech is that it may incite violence. But that is not to say that people will respond to it, and get angry, as with the depictions of Muhammad. Rather, it is to say that the speech would have to say something like, “Hunt down those Muslims!” That would be hate speech. But if I write an article criticizing Islam, and a Muslim murders me, I am not guilty of hate speech. So the question is, should there be a boundary with drawing Muhammad? Should we be restricted against making fun of Muhammad?

Just as a brief aside, let me point out that if we made fun of Muhammad when he was alive, he would have us murdered, according to the earliest biography of his life. Okay, so what is the Christian stance? Should Christians draw pictures of Muhammad?

What would drawing pictures of Muhammad accomplish? It would be unconstitutional to restrict against drawings of Muhammad. But, it seems to me that the point of depicting Muhammad is precisely to show that we can depict Muhammad. We have freedom of speech and freedom of expression to depict Muhammad. But are there not better ways to use your liberties? If I draw a picture of Muhammad, the only thing that I have done is offend Muslims, to prove that I am allowed to offend Muslims. But if I write an article like my Was Muhammad A Sexual Deviant? or David Wood’s Who Killed Muhammad? then we render a two-fold effect. We establish our freedom of speech, and we give Muslims something to consider, because, after all, we want them to come to Christ.

If we dig into the Islamic sources and recite facts about Muhammad’s life, then, of course, many will be offended, because there is offensive material in the Islamic sources. But, the reason that they will be offended, is not that we drew some stupid cartoon. It is that we are lights shining in the darkness. We are exposing Satan. We are showing the world who Muhammad was and the core of the religion that he left behind. Should Christians draw pictures of Muhammad? I just do not see a point. There are better ways for us to spend our time than intentionally offending Muslims. We can give them something to think about. In his book, Seeking Allah, Finding Jesus that is what Nabeel Qureshi explained. He was brought to faith in Christ after forced to wrestle with these difficult questions after being raised a devout Muslim.

We should love our enemies. If all of our freedom is taken away, if we are living under Shari’a Law, if we are forced to pay the jizya, we are still called to love our enemies. Jesus was a Jew living under Roman rule, and nonetheless, he told his countrymen that when the Romans force you to walk one mile, walk two with them (Matthew 5:41). If anyone strikes your left cheek, offer your right (v. 39). He commanded, (v. 43-44) “You have heard it said, ‘Love your neighbor, and hate your enemy.’ But I tell you, love your enemies and pray for those who persecute you.”

If your purpose is to offend people, then I would have to ask if you are really living up to that. If you are actively trying to love Muslims, then I suspect that you will not draw cartoons of Muhammad. You can talk to them about Muhammad, and some of that material might be offensive. But you add a superfluous stumbling block when that conversation begins in the form of a cartoon. Should Christians draw pictures of Muhammad? I argue that this is not love for your enemies nor love for your neighbor. It is entertainment at the expense of your enemies and neighbors.

What is more likely to help your Muslim friend come to Christ? If your Muslim neighbor asks you what you did today, how will you reply? Will you tell them that you drew a cartoon of his beloved prophet? Or will you tell them that you read the gospel of Mark? Will you tell them that you read something interesting about Muhammad’s life? I suppose I am thinking evangelistically and in a manner that is oriented toward preaching the gospel. That is how Christians should be thinking. When we look at Muslims, I do not think that we should snarl in disgust and mentally accuse them of terrorism. We should not think so much about our differences. We should think, “there is a person who is in desperate need of God’s grace. If not for that grace, I, too, would be a Muslim.” Where then is boasting? It is excluded.

Should Christians draw pictures of Muhammad? As we interact and even debate with our Muslims friends, I suggest that it ought to be with the end of sharing the gospel with them. The Word became flesh. Learn about Jesus’s claims to be God. He died on the cross for their sins, in their place. The unrighteousness of man was put on Christ so that the righteousness of Christ was put on man. Learn about the historical evidence for the crucifixion. He rose again, he defeated death. Learn about the evidence for the resurrection.

Subscribe to David Wood’s YouTube Channel. Read James’ White’s book What Every Christian Needs To Know About The Qur’an. Do something useful with your freedom of speech.