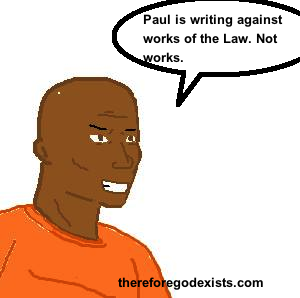 The book of Romans is the masterpiece of the apostle Paul. He exposits Genesis 15:6 and applies it to the modern Christian, seemingly shattering the distinction between the old and the new covenant. The way that a person is justified before God is by faith, to the exclusion of all works. His teaching is inescapable. However, every group that wants to add works into the plan of salvation will rejoin that Paul is excluding works of the Jewish Law, the Torah. But he is allowing for salvation by works. Is that what Paul is saying? Does Romans 3-5 exclude all works or just works of the Law? 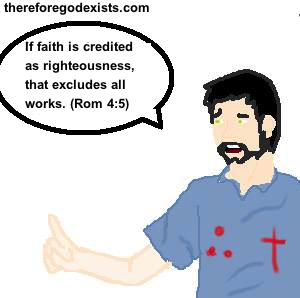 Of course it ought to be pointed out that Paul encouraged that men do good works. He encouraged that men live a righteous lifestyle. He encouraged that we walk in the newness of life (Romans 6:1-8). He urged that if we are baptized by the Holy Spirit, then we are baptized into the death of Christ, and so we are no longer to walk in sin. I utterly admit this. But Paul’s teaching on salvation was that it was by faith, and has always been by faith to the exclusion of works and to the exclusion of water baptism.

Paul makes a logical argument that applies to all works. He argues in Romans 4:4, “Now to the one who works, his wage is not credited as a favor, but as what is due.” Paul’s argument is that works are meritorious with regard to salvation, hence, the reward for those words would not be a free gift. But the salvation of God is a free gift (Romans 6:23). Thus, we can only throw himself on the mercy of God. But this reasoning would cut just as deeply to every form of salvation by works. Hence, a salvation of works cannot stand against Paul’s reasoning. Does Romans 3-5 exclude all works or just works of the Law? If salvation were by any works, it would no longer be a free gift, according to Paul’s argument.

If salvation came by works, why wouldn’t it be works of the Law? If salvation came by works, why would it not be by the works of the Law? Of the Law, Paul writes, “So then, the Law is holy, and the commandment is holy and righteous and good.” (Romans 7:12). By what works, then? It seems to me that if Paul was teaching that there was an alternative law to follow, he would have been more clear. If he just meant that they can be saved by following their conscience, the mind boggles as I consider that this just leaves us with moral relativism. So God undid the Law of Moses, holy, righteous, and good, just so that men could be saved by following their unguided conscience. Does Romans 3-5 exclude all works or just works of the Law? I find that neither persuasive nor faithful to the text.

Does Romans 3-5 exclude all works or just works of the Law? There is no question in my mind that when Paul was writing, he was writing to the exclusion of all works. Justification by faith ensures that. If a man is justified by faith, that necessarily excludes all works. Paul exposes the demerits of all models of salvation by works, arguing that it gives man something to boast about before God. That is why, Paul says, God’s people are, and always have been, justified by faith. But despite that, the Law is righteous, good, and holy. Yet we are still not justified by it. We are justified by faith. From faith, good works follow.