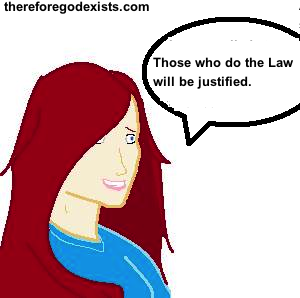 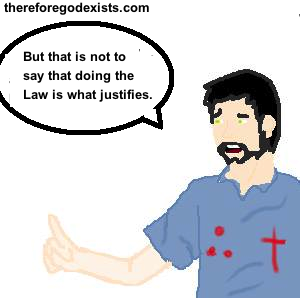 I urge you to read the relevant verses. Romans 2:12-14 “For all who have sinned without the Law will also perish without the Law, and all who have sinned under the Law will be judged by the Law; for it is not the hearers of the Law who are just before God, but the doers of the Law will be justified. For when Gentiles who do not have the Law do instinctively the things of the Law, these, not having the Law, are a law to themselves…” If one just takes this cluster of verses, the case for salvation by works seems challenging. But context kills heresy. Does Romans 2 teach salvation by works?

Paul is talking about the Torah, and in the very next chapter, he says that we are not justified by the works of the Torah. If I were to make an argument from Romans 3-5, that Paul clearly spells out salvation by faith to the exclusion of works, the heretic would suggest that Paul was delineating between works of the Law and just plain old works (A view that I refuted in my article Does Romans 3-5 Exclude All Works Or Just Works Of The Law?). So then the concession is that Paul is excluding works of the Law. The problem is that this cuts to the heart of their interpretation of Romans 2.

Paul is talking particularly about the works of the Law. He says, “it is not the hearers of the Law who are just before God, but the doers of the Law will be justified.” He is talking about the works of the Law. Yet in the very next chapter, he says, “God is the just and the justifier of the one who has faith in Jesus. Where then is boasting? It is excluded. By what sort of law? By a law of works? No, but by a law of faith. For we maintain that a man is justified by faith apart from works of the Law.” (Romans 3:26-28). Again Paul says that the righteousness of God has been manifested being witnessed by the Law and the Prophets, even the righteousness of God through faith in Jesus (3:21-22). Does Romans 2 teach salvation by works? According to 3:21-22, the Law itself testifies that a man is justified by faith in Jesus apart from the Law. Even the proponent of works salvation will hastily admit that this does exclude works of the Law. So then where does this leave their interpretation? What is Paul saying?

Think of it like this. Assume with me for a moment that a man is justified by faith. They put their trust in the sacrifice of the Lord Jesus, and are saved. If they do that, they will be born again, made a new creature and striving to do righteousness (2nd Corinthians 5:17). So they will do the Law. They will keep the Law. It is not keeping the Law that saves them, but those who are saved will keep the Law. If we say that keeping the Law is what saves us, then we put the cart before the horse. That seems to be the mistake of Israel that Paul pointed out in Romans 9:31-32. He writes, “Israel, pursuing a law of righteousness, did not arrive at that law. Why? Because they did not pursue it by faith, but as though it were by works.” The very error that Paul spells out here is what the modern heretics have plunged into. Does Romans 2 teach salvation by works?

Paul is condemning everyone. Romans 2:1 reads, “Therefore you have no excuse, everyone of you who passes judgment, for in that which you judge another, you condemn yourself, for you who judge practice the same thing.” Note well how wide of a condemnation this is. Paul tells the people that if they are judgmental of another person, they will quickly discover that they will not meet their own standard. He is not talking to a few individuals. He is talking to everyone who judges, according to the text. This leads one to his later principle in Romans 3:9-10, which reads,
“We have charged that both Jews and Greeks are all under sin, as it is written, ‘there is none righteous, not even one.'” Paul is teaching that nobody can meet the standards of the Law.

That is why most advocates of salvation by works will ignore 2:17-23, in which Paul holds the judger to his own standard. You who say that one shall not steal, do you steal? You who say that you shall not commit adultery, do you commit adultery? You who abhor idols, do you rob temples? You who boast in the Law, do you dishonor God by breaking the Law? The question is rhetorical and the answer is yes. Does Romans 2 teach salvation by works? Everybody has broken the Law. We all fall short. That is why we need a Savior.