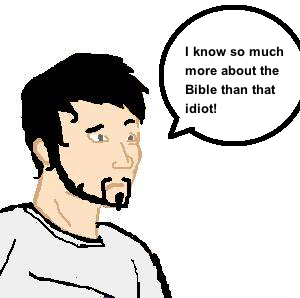 One of my greatest complaints about the modern atheist is how angry and emotional they respond to purely intellectual and academic issues. One of the iconic and most influential atheists, Richard Dawkins, has argued that all who disagree with him are either idiots, ignorant or just downright evil. These are clearly issues that are near to Dawkins’ heart to warrant such an emotional outburst. However, unfortunately, this type of behavior has become not only evident in atheists, but also in Christians. Obviously not even close to the same degree, but Christians do often become emotional when people disagree with them, becoming argumentative and offensive. So then, should Christians be argumentative?

This often seems to me like a natural response. When told that they are wrong, people tend to get angry and just sort of emote. They may address the issue, maybe, but if they do, emotions and insults are intertwined within it. I am in a number of Facebook discussion groups with Christians to discuss biblical issues and ideas. 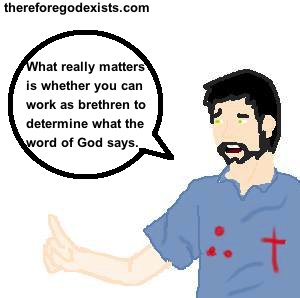 Many of them just become so angry and argumentative. Most of them just want to debate, rather than openly and honestly work together to determine what God is revealing through his word. People are often incapable of having a disagreement without reacting emotionally, and it seems that Christians are just as guilty as other groups.

No matter the venue, people become very angry with people who disagree with them. Even in actual academic debates, people become angry when told that they are wrong. When there are a group of enraged political fanatics, people tend to just stew in their anger together rather than working toward a progressive solution. The internet is probably one of the worse examples of people becoming angry. Since they are not in front of people, actually dialoguing with them, they become much more confident and therefore are willing to say whatever they are feeling without any filter at all. Christians are often no exception. But what does the Bible say about how Christians should behave? Should Christians be argumentative?

Should Christians Be Argumentative? No, It Is Rude.

This behavior that I am talking about seems radically inconsistent with the behavior that Christians are expected to have. Now, that is not to say that Christians cannot defend orthodox theology against cult groups, or even discuss secondary issues with brothers in Christ. Paul writes that he and the other apostles destroy arguments and every lofty opinion raised against the knowledge of God, and take every thought captive to obey Christ (2 Corinthians 10:5). So there is nothing wrong with rebuking a cult group, or working with a brother in Christ to determine what the word of God says.

The problem, though, is when people become rude and argumentative. Christians, like everyone else, tend to just get so angry when told that they are wrong. Perhaps the better approach then is to stop telling each other that they are wrong. We do not need to say, “you are wrong,” to express that somebody is wrong. That immediately will cause people to be defensive. With that in mind, when we want to discuss a biblical issue, even one that we feel strongly about, we need to do so with gentleness and respect (1 Peter 3:15).

When we are rude to people, or very sharp in our phrasing, it becomes more of a competition, an issue of us against them; who can prove that they know more about the Bible? When in fact, the issue should be, what does the Bible say? It does not really matter who knows more about the Bible. In fact, Jesus said that those who exalt themselves in this way will be humbled (Luke 14:11). If we want to be great in the kingdom of God, it is not a matter of asserting out ability, but about humbling ourselves and glorifying God. Thus we are not to so concentrate on who is a better Christian, or who knows more about the Bible. What matters instead is what the Bible says, and how we can work together to come to know that truth.

Should Christians Be Argumentative? No, It Is Small-Minded.

Many people are unfortunately involved in Christian denominations who condemn every other denomination aside from themselves. They believe that you have to pay the alms, say a chant, or perform some other obscure ritual to be a true Christian. What is odd about this is that these cult groups do have Scriptures to support them, just as Satan did (Matthew 4:1-11). They just radically and fundamentally take them out of context. The problem with their interpretation is that they began with the conclusion. Somebody told them what to believe before they ever read their Bible. Then they forced those beliefs into the Bible.

When we are argumentative, we sort of represent that behavior. We may not be so severe as to condemn every group aside from ourselves. But many Christians are guilty of this in a way. Christians try to defend doctrines. They will say, “I am going to defend X.” In contrast, they should be saying that they want to follow the Scripture wherever it leads. If the Scripture leads to an interpretation that contradicts what we believe, as Christians, we need to be willing to accept that. Therefore, rather than being argumentative, and defending doctrines, we need to work collectively with those who disagree with us to determine what the Bible says.