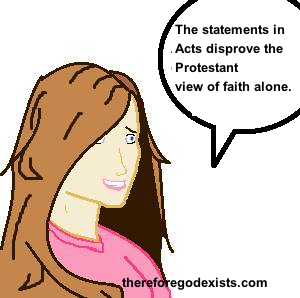 Often when a good Protestant wants to expound upon soteriology, they will appeal to the letters of Paul. Paul explain his model of salvation within his letters, in Romans, Galatians, Ephesians, et cetera. Most commonly, we will appeal to these to prove the doctrine of faith alone. Salvation comes by putting your trust in Jesus Christ, believing in his death and resurrection unto your salvation. This model of salvation comes to the exclusion of works and water baptism (even though works and baptism come later). In contrast, those who deny the doctrine of faith alone will usually feature the book of Acts in their arguments. They will say that faith is only part of the equation, and one needs to rely upon the entirety of Scripture to render a proper model of salvation. Typically, they will appeal to Acts 2:38 and Acts 22:16 to show that salvation is not by faith alone and that water baptism is included. But is this a good way to approach the topic? Can Acts disprove faith alone? 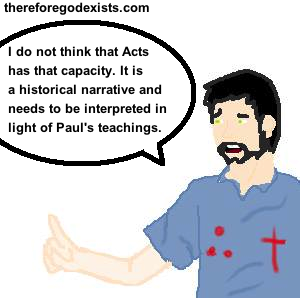 I think that Romans (particularly chapters 3-5) patently teach the doctrine of faith alone. After doing a month-long study of the book of Romans, I furnished material such as my articles “Does Romans 2 Teach Salvation By Works?”, “Does Romans 3-5 Exclude All Works Or Just Works Of The Law?”, “Does Romans 6:3-5 Refer To Water Baptism?”, and “Were The Jews Save By Works Or By Faith Alone?”. If you are interested in my thoughts on whether Romans teaches faith alone, I reference you to these articles. This post is exclusively about the question, “can Acts disprove faith alone?” Does it have that capacity?

Acts is a historical narrative. Both Acts and the gospels are historical narratives. This means that when a character from one of these books is speaking, they talking to a particular person. When Jesus tells Judas, “what you are going to do, do quickly,” we cannot, in any sense, apply that verse to our lives. When the apostles rolled dice to welcome Stephen into the fold, we cannot apply it to our lives. This is a difference between what is prescriptive and what is descriptive. In a historical narrative, everything is descriptive. It is describing a story about what happened. Of course, there is some overlap between these categories. When Jesus said that one must be born again to enter the kingdom of God, one can see clearly that this applies to everyone, because he excludes from the kingdom of God anybody who has not been born again. This is prescriptive. This is a very obvious example.

But there are many cases where it is just not obvious. When the apostles say something to a particular group, how are we to understand the applicability to our lives? Well, God has given us the answer. He used Paul to relay his plan of salvation to his people. The difference between the epistles and the narratives are that the epistles are didactic. The epistles are teachings. Paul is explicitly teaching us about the plan of salvation. If somebody is said in a historical narrative that is unclear, we must interpret that through the lens of the more clear narratives. We must interpret it through the lens of the didactic letters.

So what do we do with those passages in Acts? Acts 2:38 is probably the strongest statement in favor of the view known as baptismal regeneration. Baptismal regeneration states that regeneration, or salvation, occurs at the moment of water baptism. It reads, “Repent, and each of you be baptized in the name of Jesus Christ for the forgiveness of your sins; and you will receive the gift of the Holy Spirit.” But, Paul’s letters teach that salvation comes by faith alone to the exclusion of water baptism. So what are to do with this verse? Is the Scripture contradicting itself?

These are very strong responses to Acts 2:38 and 22:16 and are consistent with the Pauline model of salvation. But if both of these are unconvincing to you, if you really think that Peter is saying that water baptism leads to the remission of sins, I would just point this out. Peter says to do X for the remission of sins. But he does not say that X is necessary for the remission of sins. In this way, water baptism would be a sufficient cause, but not a necessary condition. Salvation would come by faith alone, and many people may have faith at the moment of water baptism. Since Paul’s letters explicitly teach that salvation comes by faith alone to the exclusion of water baptism, we are left with these conclusions. Can Acts disprove faith alone? No, it does not have capacity, nor do these verses raise serious challenges to the doctrine of faith alone.