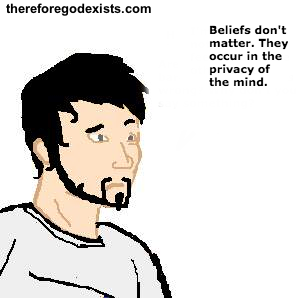 Christians share the gospel. During Jesus’ public ministry, he told men to repent and believe the gospel, because the Kingdom of God was near. But repentance is about changing your attitude. When somebody repents, she will change her mind about sin and about Christ, submitting herself to the gospel. It is something that happens internally, in the blink of an eye, and it is the free gift of God. When Christians share the gospel, there is a sense in which we want men to change their mind, knowing that if they do change their mind, it will be a work of God moving on their heart. But why is it that changing one’s mind is so important? We are talking about how individuals arrange things in their own mind and how they make sense of the world. Why is what we believe in the privacy of our mind so important? 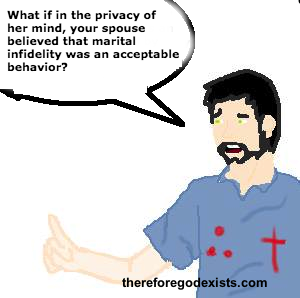 One might be inclined to think that believing in works-salvation or a gospel of grace and grace alone might make no difference because it is really just a matter of how you arrange things in your mind. It is something like putting the comma in one place instead of another. Whether you are discussing differing religious beliefs, such as Christianity, Islam, atheism, or different denominational perspectives, such as Calvinism or Arminianism, why does it really matter? Beliefs are something that are private and that occur in the privacy of one’s own mind. Yet the central premise of Christianity is precisely that everybody is born depraved, inclined to sin, and in sharing the gospel, we are striving to change their mind, to change their beliefs. Why is Christianity so concerned about how an individual arranges concepts in their own mind?

While it may be tempting to think that beliefs are something that stay in the privacy of one’s own mind, that is often not the case. There are very few people who do not act on their beliefs in some way. Beliefs will define who you are and how you interact with the world. What an individual believes will define whether they are a liberal or a conservative, a Christian or an atheist and heretical or orthodox. If somebody holds the belief that human beings are mere animals, not made in the image of God, not intrinsically more valuable than a goat, a sheep, or a chicken, then what sort of behavior would you expect to emerge? Moral behavior such as abortion or euthanasia will inevitably abound because all that really matters is one’s own personal freedom.

Similarly, suppose a man held the belief that he was the Messiah. Most of us will recognize that this belief would impact his behavior in a very negative way. He would attempt to influence people by inspiring devotion to himself, pulling them away from the faith and into idolatry and into heresy. Suppose a man held the belief that it was morally acceptable to lie or to cheat on his spouse. This should not be taken as an abstract figment of the imagination. The infamous atheist biologist Richard Dawkins has made similar proclamations, arguing that sexual jealousy is a primitive vestige of our evolutionary past. If your spouse held that belief, would that be acceptable? Is it not true that the beliefs that we hold truly do matter, and the way that we arrange concepts in the privacy of our own mind really do impact how we behave in the world? The question that you should ask yourself is this: would you ever marry an individual who believed that sexual infidelity was an acceptable practice within a marriage? If you have answered in the negative, then you understand that what you believe really does matter.

Education Is All About What You Believe

People often try to separate beliefs from knowledge. That will raise the question of what these two concepts are. Beliefs are propositions that you ascribe to. Knowledge is a little more nuanced. Many will accept the definition that knowledge is justified, true belief. Some might want to add qualifiers to that definition, and that is fine. That will not blunt the force of the point that I am making. Logically prior to coming to know something, you will have to believe it. Knowledge presupposes belief (though belief does not presuppose knowledge). The educational system is therefore devoted to inspiring students to accept correct beliefs about the world.

Think of a subject such a mathematics. If a student convinces himself that the value of N is always 3, no matter the equation or the given formula, he will hold a false belief and his education will be impaired. A proper education will inform him that N could have different values depending on the formula and the equation. Similarly, in the science classroom, professors will educate their students about the natural world and help them to come to accept true beliefs about things that happened in the past and in the present. Before the chemist mixes two substances, she will have to believe that this procedure will yield a certain result. Belief is a necessary condition to the educational process. Convincing people to change their beliefs when new information arises is essential to education. Therefore, the person who believes that the beliefs one holds in the privacy of their own mind are irrelevant will literally be undermining the educational system.

Are Religious Beliefs In A Different Category?

When people advocate for some form of relativism, they are often not speaking of mathematics, science or history. They are often speaking of one’s theological beliefs. How can the way that we arrange our thoughts of God really affect anything? They are in the privacy of our own minds. There are several points that one may make in response to this. First, all topics are theological topics. Everything that we do and believe occurs within the created order. If you are conducting mathematics, then you are operating within the mathematical structure that God had in mind. If you are plunging into the mysterious quantum vacuum, then you are peeking into an aspect of God’s creation that has never before been known to man. Now, one might think that this is a naive way of looking at the world and will ultimately compromise scientific and intellectual pursuits. If this is your reaction, then you are beginning to understand the efficacy of ascribing to correct theological beliefs.

Incorrect theological positions will impact more than intellectual pursuits. They will impact humanitarian pursuits. When a terrorist commits suicide, he is doing it because he is acting on a certain set of theological beliefs. He believes that his religion prescribes him to make war with those who do not share his religious principles. When an army goes to war for the sake of their shared religion, they believe that they are doing the will of God. Perhaps in a more culturally relevant example, when an ordained minister marries two members of the same sex, he believes that this marriage is holy and sanctified before God. When a minister refuses to marry two individuals, he does not believe that. Our theological beliefs will very much impact our behavior.

It should be clear that there is an indisputable connection between theology and ethics. When we act on our moral intuitions or reasoning, we believe that this action will yield better results than their negation. Many of us will based our moral convictions upon our theological convictions, and indeed we often we see no difference. I am pro-life because I believe that mankind is made in the image of God and it is wrong to take a life. To engage in an argument about the pro-life movement would essentially be to engage in a theological argument (even though one can make the case for the sanctity of life without explicitly appealing to theology). In fact, the ever-fading western conviction that mankind has inalienable rights is based upon the Judeo-Christian ethic emerging from the doctrine of the image of God. It may even be argued that many of us recognize that mankind has these rights precisely because we are made in the image of God. If you think that this is a dangerous belief that could yield destruction consequences, then you have conceded my central thesis. Behold the power of beliefs.

What About Beliefs With Seemingly No Practical Consequences, Like Soteriology?

This would be where denominational disputes, or disputes between orthodoxy and heresy would become relevant. As Christians, we recognize that to be saved, one needs only to put her trust in Christ, believing in God’s promises based on the sacrifice of the perfect substitute. His death becomes our death and his resurrection becomes our resurrection. Our works do not save us and baptism does not save us, but works and baptism do flow from salvation. In this case, a similar argument may be mounted that one’s beliefs really do not matter because the consequences will be identical. If somebody believes that faith plus works save them, the difference would only be in their own mind. We are all going through the same process – faith, baptism, and works. The only real difference is in what we believe saves us. It is a matter to be resolved in the privacy of one’s own mind and has absolutely no practical differences, right?

Well suppose for a moment that your spouse did not trust you, but decided that for the good of your marriage, she would behave as though she did trust you. Suppose she did not love you, but she would behave as though she did for the good of your children. The practical consequences would be the same. But do her beliefs matter? Does it matter that she holds the belief, “My spouse is trustworthy,” if the practical consequences are identical? A similar case can be made in the case of soteriology (the doctrine of salvation). It is a matter of where you are placing your trust and whether you believe that God’s promises are true. The reason that we are saved and that it can be said that we share in the faith of Abraham is that we believe that God’s promises are true. Those promises are based on the sacrifice of the cross. If one believes that God’s promise of eternal life based on the merit and worth of the Son are insufficient, and you have to be good enough to atone for your own sin, then you are not trusting in Christ.

Our beliefs matter. They impact who we trust, our moral decisions, our relationships, our education, humanitarian causes, and ultimately our beliefs decide the direction and fate of humanity. That is why John 3:17-18 says, “Whoever believes in [the Son] is not condemned, but whoever does not believe stands condemned already because they have not believed in the name of God’s one and only Son.”

Recommended Reading:
My Conversion From Oneness Pentecostalism To Biblical Christianity (I changed my beliefs)
Is Justification By Faith Or By Faith Alone?