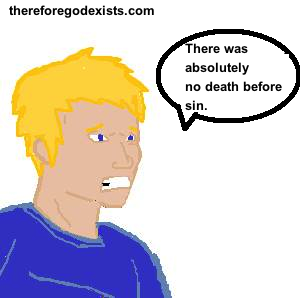 The fascination of education may differ in children in that some prefer only to stay inside watching television and refusing to indulge in the intellectual pursuits which are offered to them. Others participate in science experiments willingly and even enjoy it. However among both of these groups, there are few children that are not fascinated by the concept of dinosaurs. Who could blame them? Of course, many of my certain conservative evangelical Christian brethren find the modern teachings about dinosaurs to be a compromise to biblical teaching. It maintains that dinosaurs died prior to the existence of human beings, while, they argue, the Bible teaches the there was absolutely no death prior to the sin of Adam. So did animals die before the Fall? 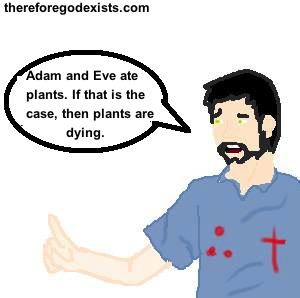 This may be an important question insofar as the amount of people who are interested in it is concerned. However insofar as salvation is concerned, it is accounted for like dust on a scale. Whether a person adheres to old earth creationism or young earth creationism is not an issue of salvation. Both groups are appealing to the Bible for their source of knowledge, and both groups trust in Christ for their salvation. We do not need to have absolutely perfect theology to be saved. Whether animals died before the Fall, and whether they did not die before the Fall, and what one believes about that says absolutely nothing about their salvation.

Despite that, certain groups have argued that this secondary issue is worthy of condemnation. The more radical groups argue that if we say that animals died before the Fall, then we deny that death came to the world through sin (Romans 5:12), and therefore also undermine our need for a Savior. The problem with this view is that somebody can know that they are a sinner without knowing the precise history of how they became a sinner. A person can be saved just by reading the gospel of John and giving their life to Christ. They do not need to figure everything out to be saved. Sharpening our theology is not an immediately satisfied experience, but rather an ongoing experience, it is part of ongoing sanctification.

So is Did the animals die before the Fall? and interesting and important question? Yes, because of the amount of people who participate in this discussion. But it has no bearing on salvation.

What we often forget is that God himself wrote the natural world. That is why Christian theologians such as Doctor Hugh Ross are compelled to call nature the 67th book of the Bible. We are not going to find anything that arises out of the natural world that contradicts the written word (and much of it will overlap). The natural revelation, though, reveals that prior to the Fall of man, the world was overwhelmed by hostility; it was truly a tooth and claw world. God set down an ecosystem. Dinosaurs fought, died, killed, and ate. So the same after the dinosaurs were extinct. In fact, the world was so hostile that God had to create the Garden of Eden specifically for Adam and Eve (Genesis 2:8) so that they could be separated from the world.

But the evangelical Christians who believe that the earth is very young will argue that the Scripture is in contrast with this view, specifically that it says, “Therefore, just as sin entered the world through one man, and death through sin, and in this way death came to all people, because all sinned…” If they are right, then this view presupposes that death in this verse refers to all biological organisms. There was absolutely no death prior to the Fall. But not even they believe this. Adam and Eve ate fruit. If they are eating fruit, then plants are obviously dying. So to maintain this view, there has to be an exclusion.

That is precisely what I am saying as well. The death that reigned is referring only to the death of human beings. But there is no reason to think that animals would be immortal. In fact, it might be argued that Paul was referring exclusively to a spiritual death. According to the Strong’s Greek Lexicon, the word that was translated into death is thanatos, and it means to fall into an unsaved state. This unsaved state entered through sin and spread to all people.

How Did Sin Affect The World?

Everybody acknowledges that things are not the way that they are supposed to be. The world is less than ideal insofar as we are concerned with the flourishing of conscious creatures. It is full of evil, natural disasters, birth pains, and as Paul wrote, “For the creation was subjected to frustration, not by its own choice, but by the will of the one who subjected it, in hope that the creation itself will be liberated from its bondage to decay and brought into the freedom and glory of the children of God.”

Creation is in a state of decay and awaits its’ restoration. The world is not as it is supposed to be. This is certainly because of sin. But that is not to say that sin came chronologically first. Even the radical young earth group, Answers In Genesis, agrees that the 2nd Law Of Thermodynamics has been in play since the creation of the world. This is because God created a world that would be inhabited by sinful creatures. Essentially, the effect of sin was retroactive.

As Christians, we should be familiar with this. The sacrifice of Christ, too, was retroactive. Despite that the living Lord had not yet died, men such as Job knew that they would be raised from the dead because of their Redeemer (Job 19:25). Abraham and all of the patriarchs were counted as righteous despite that the animal sacrifices could not atone for their sin but merely symbolized the sacrifice of Christ (Hebrews 10:11-14).

God is not limited by our conception of time. He is the cause of time, and literally transcends it. As such, he created a world that was to be inhabited by sinners, and therefore was in a state of decay. So did death come through sin? Absolutely. But did sin come chronologically before death? Not necessarily.

Therefore, did animals die before the Fall? There is nothing in the Bible to suggest otherwise.